On September 1898, John Kemp of Wynnewood, Indian Territory appeared in front of the Dawes Commission to enroll himself and several members of his family. His goal was to enroll his wife, Meline and their children Gabriel and Louis P.  An interesting note appears on the bottom of his card about a "petition to transfer". This may suggest that he was on the list known to some as Bettie's List--a list of hundreds of Chickasaw Freedmen requesting to be transferred to the Blood Roll, having had at least one parent or grandparent, to have been of Chickasaw blood.

On the reverse side of the card, the names of the parents are found. John's father was a man known simply as "Louis", and his mother was a woman referred to only as "Jennie". (See images below.) 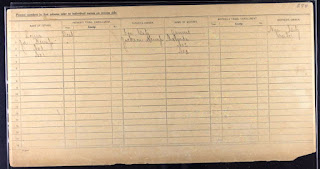 His file deserves attention because he was 98 years old at the time, and John Kemp was the oldest Chickasaw Freedman to be enrolled. He was a man who by his age would have been among Chickasaws in Mississippi, long before their removal and arrival in the west. His was a life that was able to endure the horrors and cruelties of slavery, as one of the many people enslaved by Jackson Kemp.

For one to have been so old, I became curious to learn more about the man, his life and his family. As a slave was his life a difficult one, and could more be learned?

Would his Dawes interview reveal much detail, or as a Chickasaw Freedmen who were mistreated and neglected by their own nation during the Dawes process, would he have one of the notorious "summaries" in his interview?

I pulled up his Dawes application packet, and was surprised to see more than a 2-3 sentence summary. What the file contained was again a summary, but several summaries about his children--all of them. Included among the names of his children are the names of his daughters who were then married, with different surnames. This amazing list of his children is even further enhanced, as he goes on to then name his sons and daughters their spouse, as well as the names of their children. This is one of the few Chickasaw files that goes into that much detail on a Freedman family.

Because of the extensive detail on the record, the children and their families deserve to be cited here.

Additional children:
John Kemp
Serena
George Reynolds
Adline Kemp Collins (name added from additional source below)
In addition to the names of John Kemp's children are the names of the grandchildren, providing even more data for the Kemp family researcher. Combined with the enrollment cards, the case of John Kemp contains 4 generations of data. 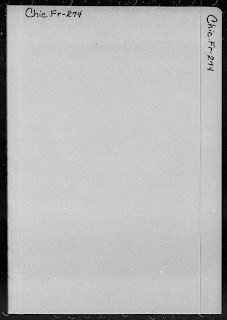 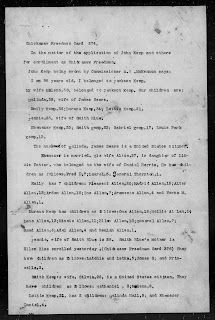 (same as for above image) 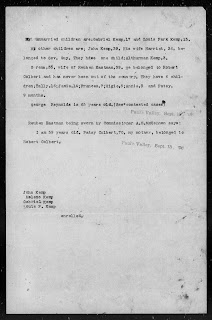 (same as for above image)

I could not help but wonder why so much information was asked of John Kemp, when countless others had the well known "abbreviated" files. The age of the man is a marvel in itself, and perhaps because he was an elder among the freedmen, that he may have been interviewed so extensively. Thankfully this is one of the more unique files that document multiple generations of a large clan of Kemps from Chickasaw country.

It should be noted that the Kemps were a large clan among Chickasaw Freedmen families and there are others, who are possibly related to John Kemp that deserve equally as extensive research to determine if there are even more connections to the Kemp clan. The families of Henry Kemp and Isaac Kemp for example are worth studying to see if there were connections to the John Kemp family clan.

(This family clan is quite extensive and most likely interacted socially and possibly married into to two other large family clans from the Chickasaw Freedmen community--the Stevensons, and the Cochrans. Those families were from the Ada and Stonewall communities, but chances are strong that many did have contact with each other.)

Could more be learned about John Kemp?

What additional resources might there be to learn more about the man himself? The answer would come from the Indian Pioneer Papers, which are part of the Western History Collection at the University of Oklahoma.

The interview of John's son Ebenezer is quite fascinating and reflects some of the life of John Kemp and his family in the years after the Civil War. 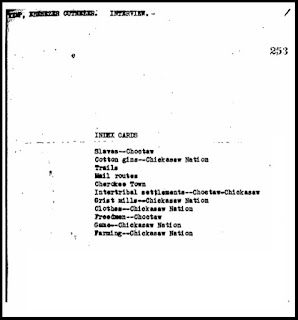 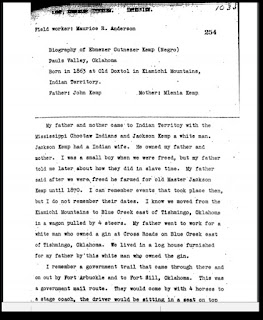 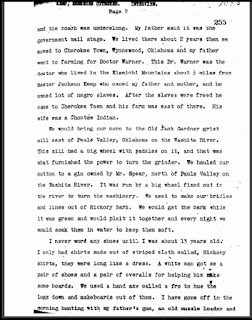 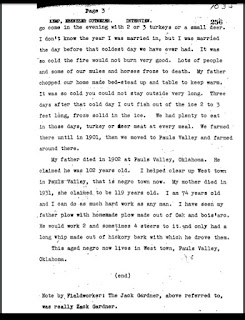 More on John Kemp was found when I read another interview from the Pioneer papers from the Western History Collection. Another daughter of John Kemp was Adeline Collins who was interviewed in July 1937. Her father was also John Kemp.

The piece is heartbreaking to read, for she described a whipping given to her father John under the orders of Jackson Kemp the slave holder. It answers the question about John's life while enslaved and reading about the whipping that the other slaves were forced to watch, describes the horrors of Black chattel slavery as practiced in Chickasaw country. 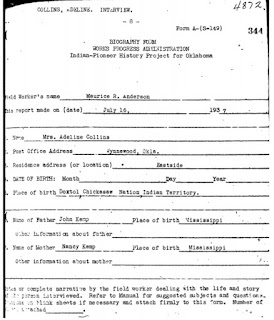 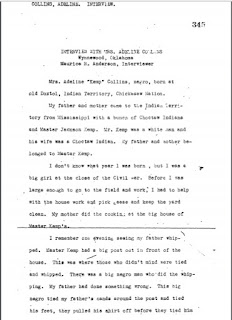 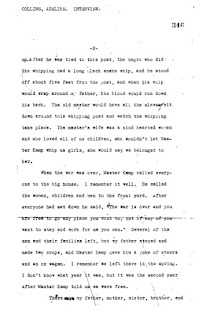 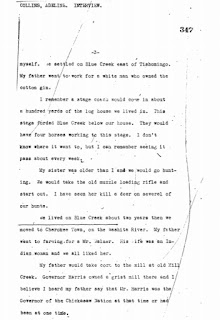 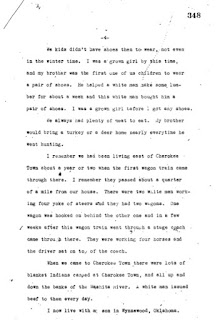 Both Adeline Collins and Ebenezer Kemp spoke of life after slavery when the father worked for a Mr. Garner (or Galner). A study of the 1860 slave schedule reflected the name of a Mr. Galner for whom John may have worked after freedom from bondage.

I was also curious to see what kind of community that John lived in while enslaved. Was he living among a large community of enslaved families, or was he part of a single household of slaves. I was surprised to see the size of the community of people enslaved by Jackson Kemp. He held over 60 men, women and children in bondage, as his human chattel. 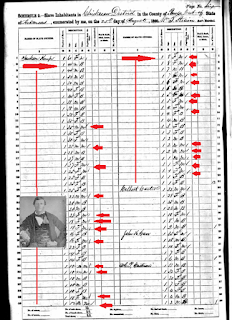 It should be pointed out that among the many enslaved people reflected as being held by Jackson Kemp, about 20 of them were listed as "fugitives". In other words they were seeking freedom and had runaway from the estate of Jackson Kemp. They were people of all ages, which suggests that some fled with their children. Could John have been among them? One of the oldest slaves held by Kemp was a 60 year old woman. Was John among others who fled? Was this older woman related to him?

Close up of previous image.

The life of John Kemp, is the story of a man who survived removal to the west with Chickasaws, a slave whipping as a younger man, made it freedom, and later lived through the years of  westward expansion and the continuing trials endured by Chickasaw Freedmen.

In spite of hardship as a man enslaved, his story is a remarkable story of resilience and a desire to survive. John Kemp was able to live to not only experience freedom for himself, but also to see his children and grandchildren enjoy life in freedom. In the post war years the Kemp family clan lived near Blue Creek, then Cherokee Town, and with time, there was final settlement in and around Tishomingo and later Wynnewood.
*****  *****  *****
(This is the 7th article in a series devoted to sharing families held as slaves in Indian Territory (now known as Oklahoma). The focus is on Freedmen from the Five Civilized Tribes and are part of the efforts in 2017 to document 52 families om 52 weeks.)

It looks like the ticks are used to identify the "mulattos" as the M are all ticked and the B are not. I have seen this on other slave censuses.

Awesome info, Angela! I do agree with Kristen regarding the tick marks identifying mulattos on the 1860 slave census of Jackson Kemp. I do have this info among my Kemp family history and will continue to share with family. As an FYI, there were Kemp Chickasaw Freedmen that lived in Choctaw Nation, in the Stringtown and Atoka areas. Keep it coming, Ms. One!

It's great to see this info on Mr. Kemp. In contrast, my Chickasaw Freedman ancestor's file is meager and was transferred.

I do have a Choctaw Freedmen ancestor that was very old (nearly 100) during enrollment. He died sometime after his Dawes card was completed. His death record is included in his Dawes packet.

Hey Cousin, Thanks for posting this. John Kemp is my great great great grandfather. You have helped me get closer to finding more information on him..

Great information. John Kemp is my great great great grandfather...Joe Carter is my cousin. Im doing research and see your comment! I'm on the right track.

Im a descendent of John Kemp Jr and Harriet Kemp. My great grandfather is Althurman Kemp. Al Kemp Jr. married and moved family to the panhandle of Texas in a town called Borger. His clan has scattered but some still remain in Borger and Amarillo Tx.

With my recent family discoveries, I felt the overpowering sensation to dig more into indian traditions to have a better understanding of the environment my anscestors were living in. After learning about John Kemp from other sources, I gave an opinion that he must of been chief of a tribe in which Jackson Kemp infrailtrated. Is my speculation to far fetch to consider?

My cousin gabby posted the his on Facebook I just love knowing where some of traits for survival and hope comes from. Reading this ensures why I never give up the fight for generations go on . Thankful 🙏🏾💪🏾