Coming from the Skullyville area of the Choctaw Nation, the Piner Clayton appeared in front of the Dawes Commission to enroll himself and his family as Choctaw Freedmen, on June 14th  of 1899. I took an interest in this family because they lived in the Skullyville area, near Oak Lodge, which is the same community of my own ancestors, who lived nearby. Being so close in the same Oak Lodge area, of Skullyville, I cannot help but wonder if they knew each other. That community is now known as Spiro, Oklahoma. The family was later approved for enrollment in 1903 except the youngest child whose enrollment came much later. 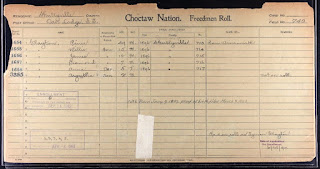 On an earlier roll created in 1896 the card reflects that the Claytons were enrolled as being from Skullyville. However upon closer examination of the card, a faint pencil line was drawn through the word Skullyville and the community of Jack's Fork was written faintly above it.

Close up of card from above.

Piner was enrolling his children only, for his wife was not a citizen of the Choctaw Nation. The children were Willie, James, Diamond, Ana and Argutha. Piner was 49 years old at that time, and he and his family had been once enslaved by Thomas Ainsworth before the Civil War.

Piner Clayton's parents were Sylvester Clayton, and Minnie Clayton. Nothing is known about Sylvester Clayton except that he was deceased at the time of the Dawes enrollment. Piner's mother Millie was also deceased by that time,, but it is known that she was also enslaved by Tom Ainsworth. 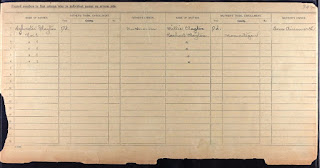 Reverse side of Enrollment Card


Source: Same as top image above.


The interview for the Clayton file was not an extensive one. Most of the focus in the file appeared to be for the youngest child, Argutha. Argutha's case was added because he was born after the father Piner had initially appeared in front of the Dawes Commission. 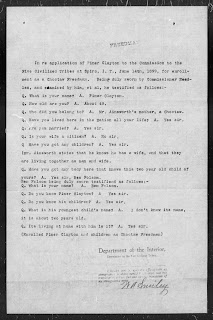 Included also in the file was a birth affidavit for the youngest child Argutha. (Note that by 1910, the child was referred to in the federal census as "Augustus.") 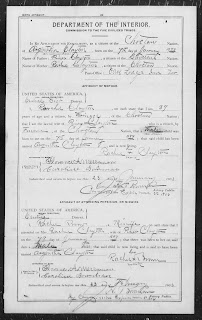 (Source: Same as previous image)
In an effort to learn more about the family the Federal census of 1900 and 1910 were examined. In 1900 the family was enumerated in Mountain township, in the Choctaw Nation. However, by the time of the 1910 census the family had relocated to Braden. (Braden was and is still called "Braden Bottoms" by those living in what is now LeFlore County, Oklahoma.)

The move to the Braden Bottoms could have possibly been due to the Claytons being approved for land allotment and for having selected their land by 1910. The applications for allotment were examined and an extensive files for the Clayton family appeared for Piner and the children. Because Argutha's roll number was out of sequence on the enrollment card (see above) his land allotment application was conducted later, but he too received land as did each of the members of the Clayton household. 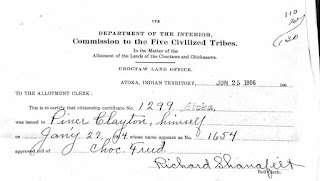 Sample of land record of Piner Clayton. Each member of the family excluding Rachel the mother,
received their own land, and each had a file with the land descriptions and plat map.

The Clayton Family lived for several decades in the eastern Oklahoma community in LeFlore County. Some eventually moved to Oklahoma. This strong family has deep Oklahoma roots that continue to thrive both on Oklahoma soil and places beyond.

(This is the 5th article in a series devoted to sharing families once enslaved in Indian Territory. The focus is on Freedmen from the Five Civilized Tribes and are part of the effort in 2017 to document 52 families in 52 weeks.)