In the 1890s, Jerry Alberty lived with his family in Wagoner, Indian Territory. He was 66 at the time and lived with his wife Ruth, and their three daughters Amelia, Bertha, and Hattie. He was a Cherokee citizen, and earlier in life he was enslaved by William Alberty. His wife Ruth had once been enslaved by Nancy Marchum. Their data was all included on Cherokee Freedman Card #153. 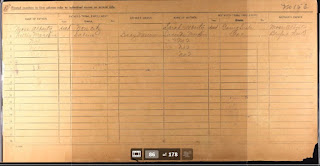 (Same as above image)

From the Application Jackets
The interview is a standard one for Jerry Alberty, beginning with questions about his status in the Cherokee nation. He mentions the name of his slave holders as well as the name of the person who held his wife in bondage.

Some interesting questions reflect events in his life during the Civil War. He was taken further south in Indian Territory, as many slaves were during the war, with the intention of keeping the enslaved from conflict and from any opportunity for escape. Ruth was also taken south, near Red River, and Jerry Alberty pointed out that he brought Ruth back to the Cherokee Nation with him, and that he married her while they were still there.

When asked where he was before the Civil War, he pointed out that in the beginning of the war he was in the Cherokee Nation, "up here on Grand River." He was also asked about wife Ruth and whether or not she was taken south during the war, and when she returned. He replied, "I brought her back when I came. I married her in the south, on Red River, during the war and brought her back when I returned." 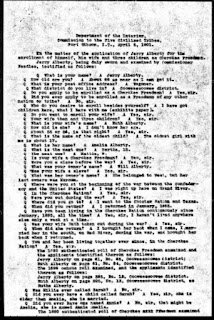 The commissioners then examined the 1880 Authenticated Roll of Cherokee Freedmen and the names of Jerry and Ruth Alberty were found on that roll. It was also revealed that they had another daughter called Sarah who was by that time,now married, and was not being claimed during that application process.

Thankfully the names of the children were also found on the 1896 roll and as a result the family enrolled without difficulty. 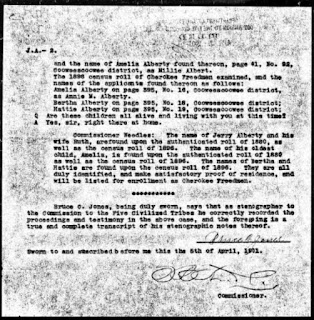 Two years later another interview is conducted but only with daughter Amelia who was married. Her husband was Tollie Elliott, who was not a Cherokee citizen. Amelia and her husband marred in December 1901, and lived in Wagoner, I.T. 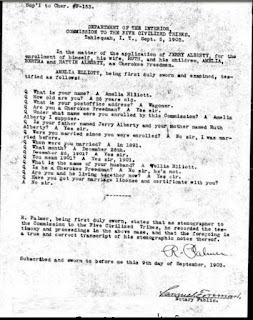 And a few years later in an interview with a man called William Fields, it is learned that Jerry Alberty's  younger daughter Bertha had married in August 2002. Bertha's husband was the son of the witness William Fields. 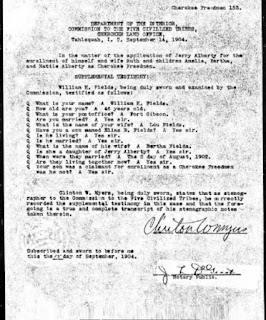 In the interview with William Fields, it was mentioned that his son was an applicant as a Cherokee Freedmen. A search was made for his enrollment card, and it was learned that his application was rejected. Apparently there was a claim that had also been placed for reconsideration but was apparently denied. However as Bertha was enrolled her husband would have eventually have had access to land nevertheless, even though his claim was denied. 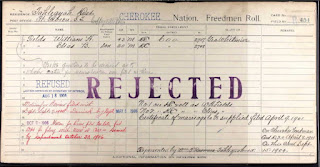 (Same as above image)

Additional family information
This Alberty family was well documented and as was stated in the interview, they were found on the authenticated roll of Cherokee Citizens of 1880. From that entry of 1880 the size of the Alberty family is found. 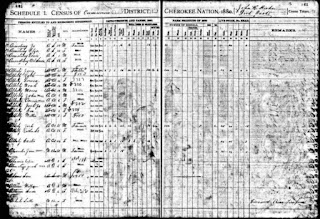 On that record the names of additional children are found: Louisa, Noah, Moses, John, Carrie, Josh J., Sam, and Millie. Those who were still living at the time of the Dawes enrollment era would have been adults and submitted applications on their own. 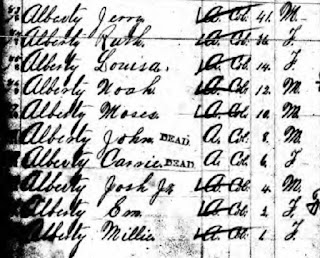 Close up of Albertys on the 1880 Roll

A few years later Jerry Alberty was also documented on the Wallace Roll, conducted in the early 1890s. And additional names can also be gleaned from that record. It is noted that his name appears on page 1 and line one of that roll. 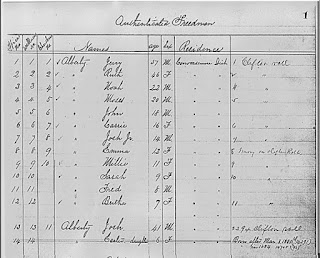 
Jerry Alberty survived enslavement, and returned to the place that he knew as home--the Cherokee Nation, and raised his large family there. The core family spent most of their years in Wagoner before subsequent generations began migrating in later years across the nation.

Jerry Alberty also served briefly on the Cherokee Nation tribal council, and he worked among the Freedman population for many years. He as well as the entire Alberty family was well respected, in Wagoner and in other Freedman communities. Jerry and Ruth both placed an interest in education for their children, and some of their children were educated at the Cherokee Colored High School in Double Springs before it was destroyed in the early 1900s.

Jerry Alberty died on the 8th of January 1904. It is noted that the death report was filed  son Noah. 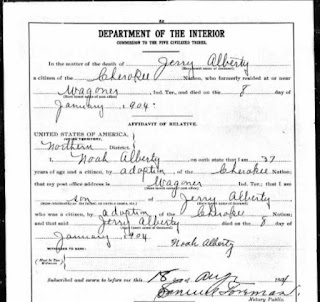 He is buried at the Jerry Alberty Family Cemetery in Wagoner Oklahoma, and a dignified stone marks his burial site. This patriarch of the large clan of Alberty's has descendants in many lines today. They have a rich heritage that is well documented, and it is hoped that his history as a survivor, family patriarch and community leader and his and Ruth's legacy will always be remembered. 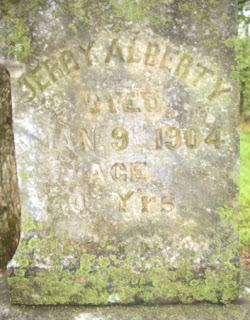 
* * * * *
This is the 31st article in a 52 article series devoted to sharing histories of families once held as enslaved people in Indian Territory, now known as Oklahoma. The focus is on the Freedmen of the Five Civilized Tribes, and these posts are part of an on-going project to document 52 families in 52 weeks.

Hi Angela. This is a wonderful article on the Jerry Alberty and his family. Your work will open many doors of opportunity for others to find their ancestors among the five civilized tribes. You inspire me to continue looking for my paternal grandmother, Ruth Smith who was born on July 28, 1898. I know she was part Indian but I think she must have been an orphan.

Please keep up the good work you are doing. I love reading of your success!
Sherry Toliver
Fort Smith, AR