Coming from Red River County of the Choctaw Nation, in the town of Harris, Indian Territory, we find the Owens family of Choctaw Freedmen. Tom Owens appeared in front of the Dawes Commission April 18, 1899 to enroll himself, his wife Charlotte, their daughters Mollie, Lettie, and son Charley and another child, Martha Ann. Charley was born enslaved and he was enslaved by Lorenzo Harris of the Choctaw Nation. 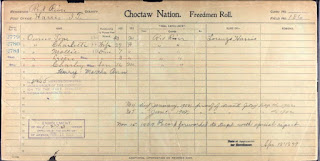 From the back of the cards, it is revealed that Tom's father was also a man called Tom Owens. His mother was Jinsey Dradner who was enslaved by Betsey Harris, wife of the enslaver Lorenzo.

Tom's wife Charlotte was from the Butler family and her father was Henry Butler, once enslaved by Tom Pitchlynn. The Pitchlynn family was a prominent family in the Choctaw Nation, and Peter Pitchlynn was once the principal chief of the Choctaw Nation. Charlotte's mother was Carrie Butler, and both Henry and Carrie (Charlotte's parents) were both on the earlier 1896 Roll. The had been enslaved by William Harris

From The Application Jacket

At first glance the standard interview is found in the packet. Basic information is collected. As a Freedman it was asked if he had been a slave and who the slave holder was. Questions were also asked about his wife and whether she was a "state woman" , meaning from the United States. The reply was that she was a Freedman of the Choctaw Nation.

Another more interesting question was asked, if he had collected $100 and agreed to leave the Territory, and he replied that he had not. 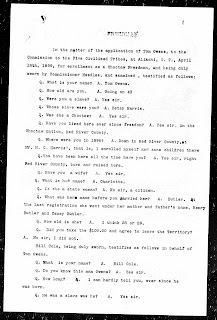 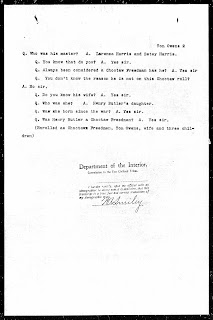 The file was surprisingly large with additional papers about people not part of the family. Among one of the pages was a document reflecting the death of daughter Lettie who died in 1902. But what stands out in the file is a large number of pages pertaining to cases of omission by the Dawes Comission to enroll various individuals who had come through the interviews with the commssioners. They had met requirements for enrollment, but for some reason they had been previously omitted. 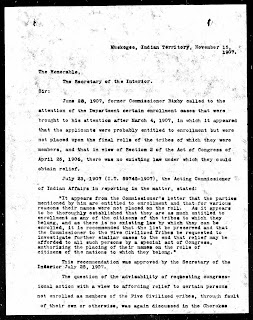 However, those pages were quite extensive. The name that appear on those multiple pages represented people from other tribes who should have been enrolled. Among all of the people on those pages were Cherokees, Creeks, Chickasaws. In an effort to clear up confusion it was pointed out that all had been omitted previously and should have been enrolled. 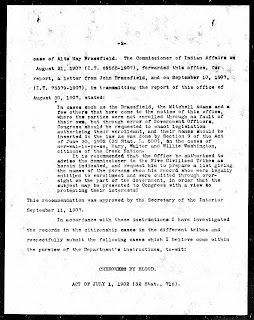 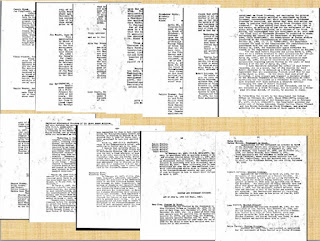 And the paragraph reflecting Tom Owens family information was included about Martha Ann Owens whose name had previously been omitted. It was also noted out that the people on the enrollment card were the children of Tom and Charlotte and that they all should also be placed upon the approved roll of Freedmen as well. 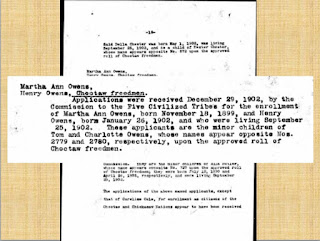 
Also found were birth affidavits that one often sees in files, reflecting children born after the interview process had begun. 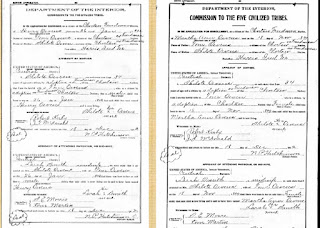 Like all families members of the Owens family was allotted land. Each person received a portion of land, appropriately. 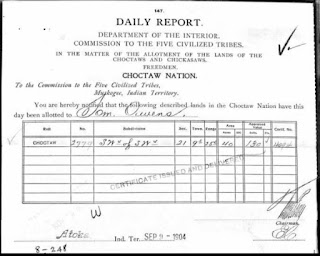 The Cole family lived for many years in the community of Harris, but years later subsequent generations relocated to central Oklahoma to the Oklahoma City are where some descendants reside today. Their history of survival of enslavement and their continued life for many years in the Choctaw Nation is a testament to their sense of family, survival and legacy.

This is the 32nd article in a 52-article series devoted to sharing histories of families once held as enslaved people in Indian Territory, now known as Oklahoma. The focus is on the Freedmen of the Five Civilized Tribes, and these posts are part of an on-going project to document 52 families in 52 weeks.