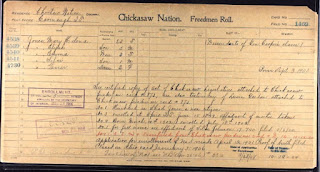 On October 19, 1904 Mary Helena Jones appeared in front of the Dawes Commission to enroll herself, her son Elijah, daughter Emma, son Silas and daughter Tener. At that time she lived in Cavanaugh, in the Choctaw Nation but they were applying as Chickasaw Freedmen. A notation on the card appears that though she was not born a slave, she and her children were "descendants of General Cooper's slaves".
Some notes at the bottom of the card provide some very useful remarks that provide valuable information about the family and its history. In particular was a reference to another card (Chickasaw Freedman Card #873)
Mary's husband was Shadrick Jones who was not a citizen of the Chickasaw Nation. Her parents were Silas Johnson, and her mother was Maggie Johnson who was enslaved by Douglas Cooper. And because Mary Helen Jones was a young woman she was not born enslaved, but her parents had once been enslaved by Chickasaws. 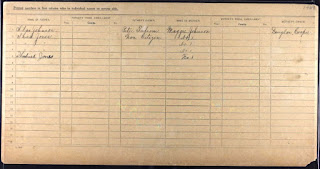 The Gordon Card
Chickasaw Freedman Card #873 reflected the Gordon family living in the Braden area of the Choctaw Nation. This was the family of Emma Gordan. She was the family head appearing at the Dawes Commission registering her children, John, Vivian, Sam, Sarah, Izora, Lewis and Abe.

Emma was the daughter of Mat McLish, and Martha Burney. There did not appear to be a connection between this Gordon family and the Jones family on the card with Mary Helena Jones. The only similarities appeared to be the fact that they resided in the Braden area, often called the Braden Bottoms, and also the fact that the parents of both Mary Helena and Emma Gordon had been enslaved at one time by General Douglas Cooper. There had most likely been a social relationship that they had share, once having had the same person who enslaved them on the same estate. 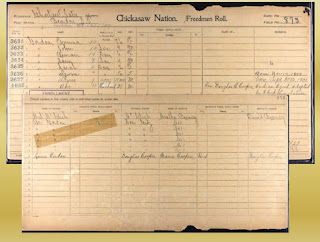 From the Application Jacket

At first glance at the items in the application jacket a small interview appears with Mary Helena, or Ellen as she preferred to be called. Only a few questions were asked of her, and it appeared that it was a short uncomplicated conversation. 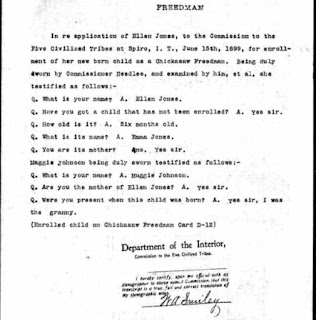 However, following this brief interview came more extensive interviews with the family involving continuous questions about the enrollment of one child--Tener. It would be the status of Tener that was questioned the most rigorously of this family. Numerous question were directed to her about the application process and who assisted her with the process. 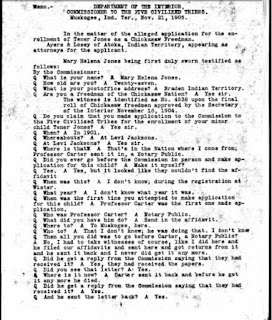 The questions continued about the individuals who had assisted her with the application process for Tener, and also who the witnesses were who accompanied her at the time of enrollment. 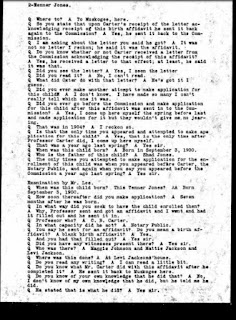 One of the persons, Professor Carter, who assisted her previously with her application had in fact passed away. One of the witnesses for her, was Maggie Jones, who was, in fact her mother. Interestingly on the enrollment card her mother was identified as Maggie Johnson. But clearly when asked if she knew the applicant, Maggie pointed out that she was in fact her mother. 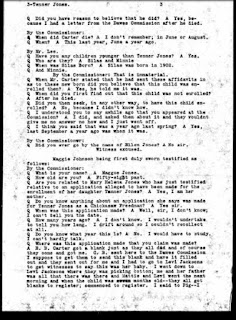 (Same as above)
The extensive questioning continued regarding the children of Mary Helena (Ellen) Jones, and the children. During the questioning the relationship between various  parties is evident. From nicknames of loved ones to the fact that Maggie also served as midwife at the births of some of the children, it is clear that they were close.

It was asked if there was any follow up to the effort to enroll the child Tener and if any inquiry was ever made when no response came. It was pointed out that letters were sent, but no replies ever came. From the continuing questions about the same issue, it is evident that many Freedman families went through a great amount of effort to enroll their children, and even after much effort they were challenged about how much they followed up as applicants. 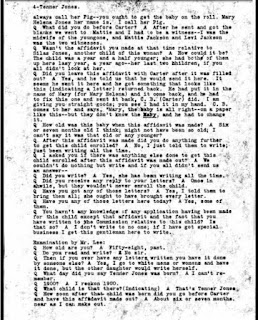 After inquiring of her daughter's follow up, the questioning shifted to Maggie as to whether she was a Chickasaw Freedman herself. Her land allotment was also brought up, and she pointed out that her allotment was actually located in the Choctaw Nation. 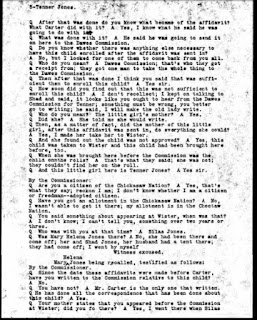 The questioning then shifted to the enrollment of the other children of the Jones family and the extensive details were asked repeatedly. But thankfully, after much effort the process came to an end as the family still awaited a decision by the commission. 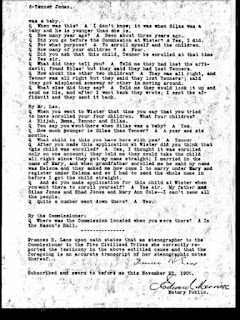 Several hand written notes are found in the file. One from Silas Johnson, father of Mary Helena Jones. His letter points out that he was one of the first people to go and file for Mary to be enrolled, and he confirms that he and Maggie are her parents. He signs the letter with his own signature. 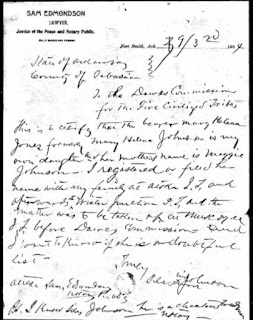 The second letter is a note by Carter the Notary verifying that Mary Helen Johnson and Shadrick Jones were married. 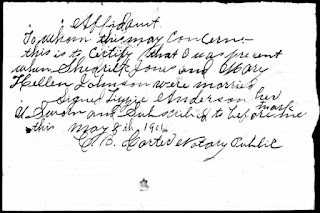 The Dawes enrollment process was created to determine the eligibility of persons to receive allotments of land, as statehood had approached.  After much effort finally in 1905 Mary Helena Jones was approved for her land allotment. She also applied for her children and they too were eligible and received their allotments. The item below reflects her own application for her land. 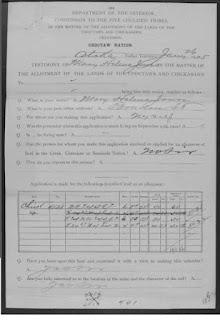 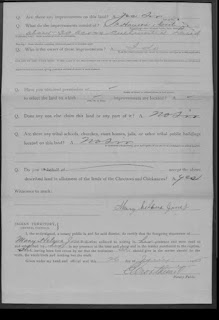 This family of Chickasaw Freedmen lived in the northern part of the Choctaw Nation and was allotted land there. Hopefully they were able to retain their land for a number of years, before time and land grafters eventually seized much of the land of Freedmen in the area.

The area once known as the "Braden Bottoms" is still agricultural although many of the families that once occupied Braden have moved away. Hopefully the legacy of the families of both Choctaw and Chickasaw nations will not be lost in the soil, as they worked the land and for many years the families thrived in the area, before time, and other opportunities encouraged their departure.

This is the 33rd article in a 52-article series devoted to sharing histories of families once held as enslaved people in Indian Territory, now known as Oklahoma. The focus is on the Freedmen of the Five Civilized Tribes, and these posts are part of an ongoing project to document 52 families in 52 weeks.
Posted by Angela Y. Walton-Raji at 11:35 PM

Thank for the article, I can still recall the tour Verdie TRIPLETT took me on through the "Braden Bottoms" a few years back. Angela I think it is important to point out that Col. Douglas COOPER was an adopted Chickasaw white man that was enrolled and allotted land in the Chickasaw Nation. He at one time was an Indian Agent for the Chickasaw Nation and there is some evidence he fathered children by at least one of his female slaves.