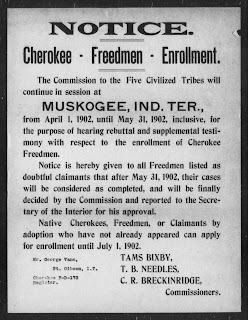 
Information was just released today and the ruling can be found HERE.

This ruling means that the Cherokee Nation may begin to process the applications of several thousand applications made by Cherokee Freedmen, that were halted when the nation voted to expel descendants of those who were once held as slaves by the nation.
Posted by Angela Y. Walton-Raji at 11:41 AM

Praise GOD for this! I don't even know what to do. I've been holding onto my application for THREE YEARS because of that amendment.