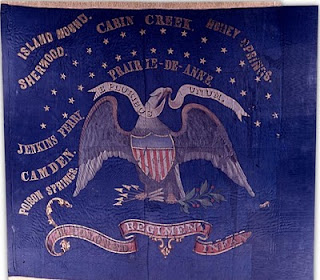 **********************************
As the nation begins to commemorate the 150th Anniversary of the Civil War, we as descendants of Indian Territory Freedmen need to pay attention to the efforts that will unfold for the next five years.  In the nearby United States,  as well as in Indian Territory, from 1861-1865, there was active  participation in the fight for freedom among those who were slaves of the Five Tribes---Cherokee, Choctaw, Chickasaw, Creek and Seminole Nations. Several hundred Africans fled into Kansas, and emerged as soldiers, armed and ready to fight for their freedom!

Upon arrival in Kansas after a treacherous winter trip into this non-slave state, an incredible opportunity arose for the slaves who escaped with Opothle Yahola and others. This opportunity was to seize freedom, enlist in the Union Army and to fight for freedom! Many men responded, some joining the 1st Kansas Colored, others the 2nd Kansas Colored and a small number of these black men also joined the 1st and 2nd Indian Home Guards.

This was the first African American unit recruited in the Union Army for service in the Civil War.
As a unit they were organized as early as August 1862, and the 1st Kansas colored was later officially mustered into the Federal Army on January 13th.


This was the first black regiment to engage in battle in the Civil War
Prior to merger with the Federal Army, the 1st Kansas Colored engaged in battle at Island Mound, Missouri in October 1862.

From this unit came the first black soldiers to die in action in the Civil War.
10 soldiers died at Island Mound, but the battle was a victory, as confederate soldiers were driven off. 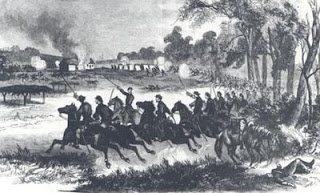 Photo: Courtesy Oklahoma Historical Society
And of course, the distinction of this unit was that this unit would be the one that "saved the day" at the Battle of Honey Springs. This battle was one in which was also described by a former Creek Nation slave, Lucinda Davis, who was a young girl, who lived close to the battlefield. She was interviewed during the WPA Slave Narrative project period. 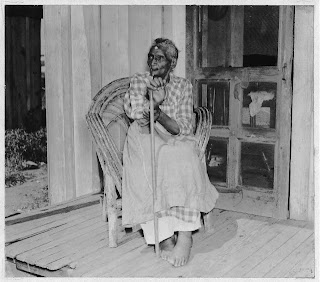 Photo: Courtesy Oklahoma Historical Society
Lucinda Davis was an eyewitness to the beginning of
the Battle of Honey Springs
Among the stories that we collect---there should be those stories of the first days of freedom, the Civil War efforts made by our ancestors, and their involvement in the war that eventually led to freedom.
Of course it must be mentioned that the end of the Civil War did not bring immediate freedom for those in Indian Territory.  When slaves were freed in the United States, the tribes were resistant in freeing their slaves in many places throughout the Territory. As a result, the Treaty of 1866 was signed that officially abolished slavery in the Five slave holding tribes.
This is all the more reason for the need to tell the story of the bravery of those men from the nations that did enlist---that did defy their masters many of whom had joined Indian confederate regiments----and their goal had nothing to do with rights of southern states----the Indian confederate units engaged in the war of the rebellion to preserve chattel slavery on their soil.
The courage of those enslaved men, who dared to escape therefore should not only be honored, but their stories should be studied and learned and told, so the future generations will know these stories.
We honor our ancestors by telling their stories! 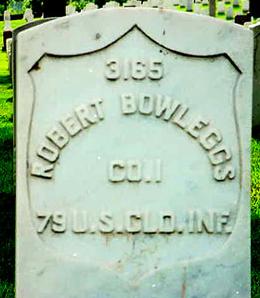 Headstone of Robert Bowleggs, 79th US Colored Infantry
Buried at Ft. Smith National Cemetery
Photo taken by Tonia Holleman of Van Buren Arkansas
The 79th was first organized as the 1st Kansas Colored
Posted by Angela Y. Walton-Raji at 6:14 AM

Thanks so much for posting this Angela. My 2nd great grandfather, Isaac Rogers, was part of the 1st Kansas as well as USCT 79th Regiment. He wasn't even 18 years old when he mustered in. I am eternally grateful to you for all the research you have done, because it lead me to find this information and now I'm hot on the trail of his former slave owner.

I'm writing about the 1st Kansas Colored right now. Some of their number evolved into a masonic grand lodge