Can a Friend of Friends be Found in the Territory? 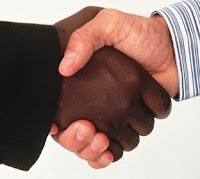 Someday the sons of former slaves and the sons of former slave-owners
will be able to sit down together at a table of brotherhood.......Martin Luther King, 1963
* * * * * * * * * * * * * * * * * * * *
Last year, in the genealogy community, a movement was created allowing descendants of slave holders to share information in their families or family papers with descendants of those who were enslaved. This gesture originated on the Our Georgia Roots blog, and and from Luckie Davis the blogger's open letter to the genealogy community,  it turned into a wonderful event where people began to interact with each other, acknowledging the past and working together in the same direction to something new. The Friend of Friends  site emerged and now dozens are sharing data on slaves once a part of their family's circle as well.

I was inspired last year, when a descendant of the slaveholders of my own Choctaw family, reached out to me. I shared that meeting with readers of my blog as well. I am happy to say that a year later, there is still contact with my new "cousins" and that our relationship is a genuine one. We speak or email regularly and we discuss the mysteries in the family and the facts that we both share in our lines.  It was and continues to be a good one. 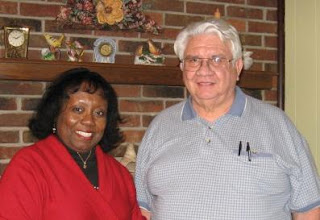 My meeting with Choctaw Descendant of the Perry clan.

I have reason to be optimistic again. This is because another person has also reached out to me.

A descendant of another Choctaw slave holder has contacted me.

We have talked, he visits my sites, we exchange email and there is hope for dialogue, and friendship to emerge. He was not an apologist, nor a revisionist for his ancestors.  And he is not responsible for the actions of his ancestors,  yet he is aware of the issues of freedmen, agrees that the tribes are also on the wrong moral side. He has shared a document created by one of his ancestors talking about the ex slaves.  He is willing to look at other family records, and he has extended a hand of friendship that I accept and that I appreciate.

So---what are the lessons here?

Lesson #1 We can meet and share what we have in common
Lesson #2 We can work to explore a better future together
Lesson #3  We can also be friends and embrace that which is also family.

How does this happen?

-Joint conferences/reunions/gatherings, to share our history can be organized. This can truly happen and there can be something good.  I was one of the many who attended the often mentioned Dartmouth conference in 2000.  That event had its moments of tension and was not without controversy then.  And this past year, several Cherokee and other native scholars attended the conference in eastern Oklahoma that several of Freedmen descendants also attended last year. Not one of the native scholars ever acknowledged that we were there, not one spoke to us unless we initiated it and not one even passed a polite nod or smile.  Icy?  Indeed!! But it doesn't have to be. Thankfully the conference planners also Indian, were warm, genuine and shared a spirit of welcome.

-Share a preservation project---cemeteries both black and Indian are disappearing fast and both need to be preserved.  Why not share that preservation effort? Many are working independently to preserve these burial sites---but how much more could be done with collaboration?

-Expand the level of scholarship.  There should be an area of study that explores the Freedmen histories, landmarks, communities----and they can take place by scholars of all races including Indian scholars who have conveniently skip over these chapters in their own history.  It does not make you less Indian by looking at, and studying and talking to the many Africans who lived and live in your midst.  The history is rich and full of amazing stories of resilience of so many! We share that history with you.

-Educational funding----myself having been an educator, and a reader in a national scholarship program, (the Gates Millenium Scholarship) and with over 25 years in higher education, I am aware of remarkable funding sources for students of all backgrounds, the opportunities and the similarity of needs within both communities. I would propose the development of  a scholarship for distinguished scholars, a fund for those who are Dawes Descendants could be initiated, and maintained by a team of educators.  There are methods of securing funds that would not tap into precious tribal resources---and the development of such a fund would serve so many.

-Health awareness and Wellness Both Indian and African American communities suffer from the same diseases. The occurrence of diabetes and hypertension are rampant in both communities, and are at epidemic proportions.  There are individuals who are working on their own to develop community based health programs, including growing organic foods, obesity prevention and so much more.  The same health problems are threatening us all, and stemming from the same causes, starch based diets, fast foods, fried foods, sedentary lifestyle, and more.  There are opportunities within the same communities to address these issues jointly---if only the people would start to talk to each other.

Our needs are the same.
Our histories took place on the same landscape.
And our ancestors arrived together---on the same trail!


Our needs are the same.
Our histories took place on the same landscape.
And our ancestors arrived together---on the same trail!
I think back a year ago, when I met the Perry descendants for the first time, and I also realize that this was probably one of the first if not the very first case of slave owners from an Indian tribe who have extended a hand of friendship to descendants of family slaves. Our meeting was probably an historic one, and it is one for which I am grateful.

What emerged was nothing confrontational, or adversarial.  It was a meeting of people who share a history, and one in which that history was acknowledged and a relationship that has been rewarding has resulted.

I think back at the conference in Muskogee, that my colleagues and I attended, and recall that very few from the tribal entities spoke to us. Some chose simply to ignore our presence, while others were overtly rude.  Some of us attempted dialogue, and only after standing aside for long periods of time, would we finally have the attention of one of the speakers, for a mere autograph on a book. It was clear that our questions were merely tolerated, as if  there was an expectation of  trouble to emerge from the Freedmen in the room. But we cannot dwell on that behavior and must simply move on.

I was inspired by the Perrys of LeFlore as I am inspired by others who listen, read, and who share. The possibilities are countless and people will realize that they have more in common than not in common.

Our needs are the same. Our histories took place on the same landscape. And our ancestors arrived together---on the same trail!

Let us learn from my meeting last year. Such things can be done.  I gladly share a portion of that meeting here.

You have such a way with words that speak volumes. I am always amazed and come away from your site enlightened. Thank you!

Thank you so much Vicky! I am happy to be able to share it with you and with others.