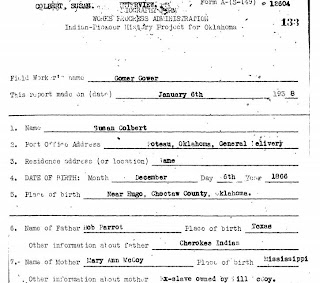 The WPA interview with Susan Colbert is an interesting one.  It reveals the policies under which many Freedmen had to live and the discrimination that was expected to be dealt to them.  This sentiment, is reflected also in the voice in which this interview was written. Instead of a 1st person speaker voice, the entire selection was written in the voice of the interviewer, Gomer Gower.  Many of the Gower interviews are most interesting since he interviewed many from the ex slave community of the Choctaw Nation.   However, his sentiments come through on the final page, that the exclusion and non-recognition of marriages with between Choctaw and "negro" spouses was acceptable and also to be applauded. 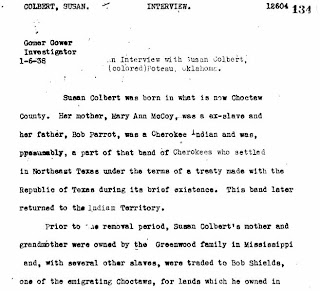 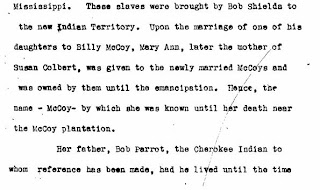 (interview continues below)
(Having a mother who was a former slave, was the prevailing rule that placed Susan Colbert on the Freedmen roll, and prevented her descendants from having access to the Nation of their ancestor today.  Their distinguishing fault? Having a female ancestor of the wrong color.)
She married twice in her lifetime.  Her first marriage was to a Choctaw freedman, and after their marriage ended, she married a Choctaw I.C. Colbert. This is one of the few interviews that outlines the racial policies followed by the Dawes Commission, and conveniently used by tools today as a tool of exclusion.
The Irony
Strangely, the practices of exclusion practice 100 years ago are not known to most who descend from their Freedmen ancestors. Thus today many individuals apply to the tribe of their grandparents and gr. grandparents, hoping to enroll in the nation. The sentiment is one of "joining the family" but when the application is received---the jolt is felt!!!  They are surprised, hurt, and confused--for the people for whom they had warmth and good feelings are meeting them with with hostility, coldness and outright dislike.  This again is unexpected and not understood.
Many Freedmen descendants speak of their ties to the Five tribes, with good feelings, and pride, and many are stunned into silence to learn that such feelings are not mutual, towards them, and that the policies of exclusion continue and are part of the current policies of the day. The hurt and surprise come from the fact that they have been taught that African people they were accepted, when there was in fact little acceptance, and surprising to many there is even less today.
The reason for so much of this comes from the fact that slavery is not acknowledged as being part of the history of the tribes, and students in Oklahoma today are not taught about slavery that took place on their own soil.
The interview continues: 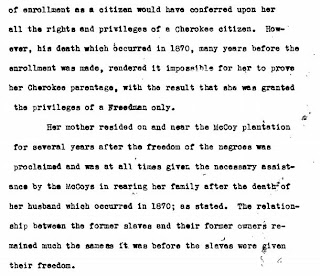 This segment indicated that there was little change to the lives
of the Choctaw slaves even in Freedom. 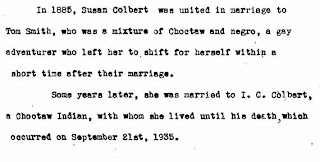 The policies of a different set of rules for Freedmen was actually addressed in her interview. 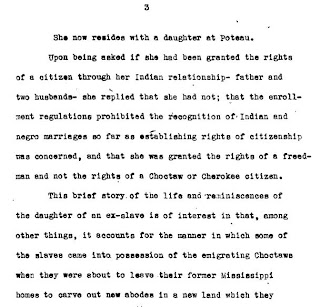 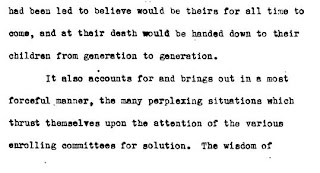 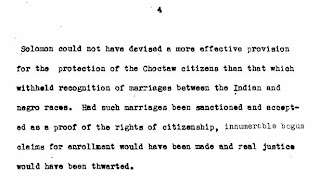 The interviewer Mr. Gower outlines the sentiments of the day (and interestingly today). The treatment or mistreatment towards those possessing African blood was not only legal  for the policy makers, but it was also considered to be smart and somehow protective. This treatment of Freedmen and their descendants was somehow  "protection," supposedly against the Negroes who might harm the integrity of the tribe.  It was described by the interviewer as wisdom that was actually greater than, as the he described it, the wisdom of Solomon.
This is such a strange statement to read and to absorb, and as both a researcher, and one who descends from Freedmen, it presents a sad statement that anti-black feelings are far larger than imagined, studied about, and admitted to by those from many communities.
This interview is shared here, because it is reflective of a policy enacted 100 years ago, supported to this day, and until further notice will continue.
Three years ago, a gentleman from the same county (LeFlore) submitted an application to the Choctaw Nation.  The enrollment card alone was clear, that the mother was a Freedman and the father was a Choctaw Indian.  The result was that the entire family of over 125 who had applied as a group were denied.  Their rejection was based solely on an ancestor who had been placed on the Freedman roll.  The father of the child was a well known Choctaw who had been a part of the tribal council and whose descendants from his other wife were easily admitted. Their admission ticket---having a mother who had no Negro blood.
This interview was one of the more fascinating ones from the Pioneer Papers, and it explains the origins of policies practiced today.
The greater irony, that Freedmen descendants, tax paying citizens of the United States are among the only people paying with their tax dollars for their own discrimination.
Sadly those who speak with such warmth and good feelings have an unpleasant surprise awaiting them, should they submit applications for enrollment.
Posted by Angela Y. Walton-Raji at 11:19 PM

This one was really touching and hit close to home. My brother was adopted from the Cherokee Nation in Arkansas. The adoption severed his ties to the tribe but sadly in many ways today he needs them as there are some things he inherited that he needs answers too.
Once again great blog.

Angela, what is the most damning part of this interview is the idea that "harm" would come to the tribes if "bogus" claims of Indian ancestry were acknowledged.

The thought that someone of African-Indian ancestry could harm the tribe is actually the bogus claim and unfortunately it is being repeated today in everyone one of the Five Slave Holding Tribes.

We can only hope that some enlightened people come to realize the true tragedy of this policy.

A couple of lectures I attended on tracing Native American ancestry referred to the slave-holding tribes, but they did not mention the racial policies that regulated membership. This is indeed sad news to hear.