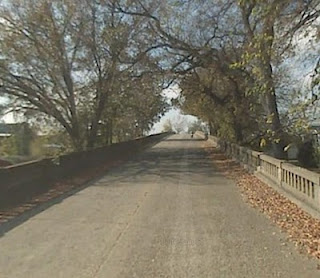 Who will meet me on the Cultural Bridge?
"I have a dream that one day........the sons of former slaves and the sons of former slave owners will be able to sit down together at the table of brotherhood." ~ Martin Luther King Jr.~
In September 2010, I shared information with my readers about my meeting a man who could also be my cousin, who contacted me.  He was the descendant of the slave owner of my gr. grandparents, and it was f or both of us A Choctaw Reunion. That meeting restored a sense of confidence in people and what people when they talk, can do.
This past week I receive another amazing email.  It was a from a gentleman who read my article about Israel Folsom, a Choctaw leader in the 19th century, and a man who also owned slaves.  The man who contacted  me was a descendant of Israel Folsom. His email was a warm one, rich in detail and he left a phone number.  I replied to his email and he wrote a second time.  The response was rich in detail, about his ancestors, and it included information about the relationship that the family maintained with some of the former slaves and their descendants. It described a relationship that continued into the 1970s.  His second email also contained a phone number, and I decided to phone him to thank him for sharing rich data with me.  We ended up talking for quite a while----and had much to share.  Like my experience with the gentleman I met a year ago, our conversation was warm, enlightening, and full of information, that will allow us to continue to talk in the future.
Several months ago, I asked the question---who will meet me on the cultural bridge? I was compelled to ask the question to express thoughts and emotions from having attended a remarkable landmark conference in Muskogee Oklahoma.  The term was taken from a presentation by one of the storytellers at that conference who asked such a question in that way.
On this day, which happens to be Martin Luther King's birthday, I am also compelled to ask the question and to reflect on his words and dedication to understanding, and to dialogue, conversation and human respect shown to all. That event in itself was enlightening, although in real time, the interaction between those from the tribes and those from the Freedmen communities was sparse and at times chilly.  But we all must grow from the experiences that we have.
With some of my paternal roots firmly planted in Oklahoma soil, the lessons of the past have not been without its challenges. Slavery, the American kind-----black chattel slavery was practiced in what is now Oklahoma-- and the slaveowners in my family's case were Choctaw.  My gr. grandparents Sam & Sallie Walton were among those slaves. 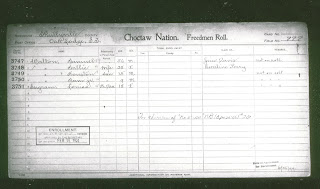 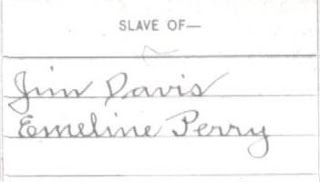 The Choctaw slave owners of my gr. grandparents were clearly spelled out on the card.
In the course of conversation with the Colbert descendant, it was odd to him also that slave descendants were  still disenfranchised to this day.  He acknowledged the fact that slavery but surely, he had hoped that such ideas of separation were not woven into tribal politics today----but they are, and I explained how this is, and how Freedmen are considered unworthy of citizenship.
It should be noted that the gentleman who contacted me, is an accomplished professional, very well educated and well established in the community where he lives.  He is an enrolled member of the tribe, and though he lives outside of Oklahoma today, does get back to his home base at least once a  year. He is therefore, no stranger to the land of his parents, grandparents, and gr. grandparents. He was also a very gracious man, and our conversation promises to lead to future ones, where data and stories can be shared, and barriers can be torn down.
This week, a judge in Cherokee Court, addressed the amendment that allowed the Cherokee Nation to "vote out" a portion of their nation that they don't like.  The judge courageously pointed out that no longer can a tribe that hides behind a "blanket of blood" (they don't have our blood) be allowed to do something so heinous.
On the day when many in the land, pause to reflect on why MLK Day exists, I urge those to simply dwell on the very concept of how descendants of those who lived on the land, who worked on the land, who died on the land in the same community----how can they NOT be considered to be a part of the community that they helped to build?
Perhaps those who despise the descendants of their slaves, from Tahlequah, to Tishomingo, from Seminole, to Durant, to Okmulgee-----perhaps it is time that they look at themselves, at their practices at their values, and decide that it is time to do what is right. And then perhaps a "change is gonna come."
Posted by Angela Y. Walton-Raji at 2:23 PM