The Western History Collection at the University of Oklahoma contains much useful data on Indian Territory. While looking at many of their digitized images, an unusual census record caught my attention. This was one of a census record taken in Cedar County, reflecting the population in 1868.  This is rare, particularly as it reflects a Choctaw community during the Reconstruction era.    I am sharing the few pages of that 1868 census here, for all researchers.
The Source of data comes from the Native American Manuscript Collection.  It was found in the Choctaw Nation Papers . Within that collection, in Box 49 Folder Number 9 this census tabulation can be found.  The document is approximately 19 pages long and the last two pages reflect the Choctaw Freedmen and the 1 white family enumerated as well.
A look at the first page reveals how detailed the information was that was collected of those considered to be fully Indian:
Page 1 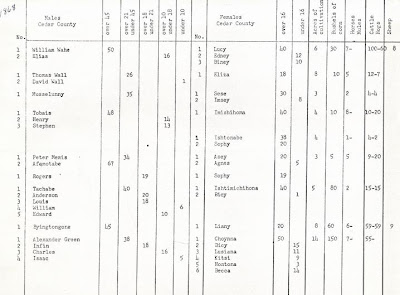 Information collected on males was detailed breaking down data on the age categories of each male:
Male Heading on 1868 Census Form

Data collected on the Freedmen--their former slaves were the least detailed:
Heading Found on Freedman Page of 1868 Census Form

Since the 1868 Freedman page was small and only consisted of 1 full page it is shown in its entirety here. 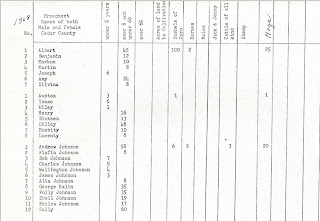 1868 Cedar County Census - Choctaw Freedmen
The value of Freedmen was clearly reflected in the manner in which data was collected. Age categories did not matter and both genders were grouped together. In addition, many of these former slaves were not listed with surnames. This was a mere two years out of slavery. (Remember slavery was not abolished in Indian Territory until 1866, not 1865.) Quite possibly these former slaves were still being addressed with single names, and possibly some had not begun to use surnames. However this list does represent one of the very first times that the names former Choctaw slaves were written down in family groups---not as property but as adults with families. Though small, this could possibly  be the earliest listing of Choctaw slaves known to exist
There was a small page reflecting a white family also on the same document: 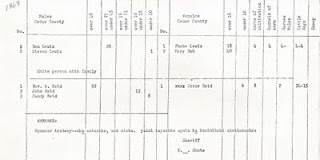 Like the Choctaw families more data was included on the males and females
than were collected on the former Choctaw slaves.
All documents and all pages can be found on the site of the Native American Manuscript Collection and the Choctaw Nation Papers, at the University of Oklahoma.
Posted by Angela Y. Walton-Raji at 9:04 PM No comments: 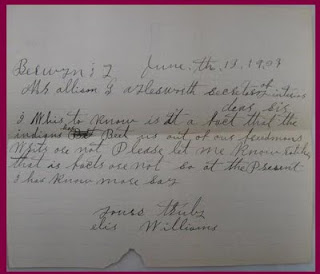 Reverse side of Dawes Card for Ellis Williams
Information about Ellis and his history is present reflecting that he was a slave of Chickasaw Sophia Keeel
On the front of the card is also the name of his wife, Viney. On the reverse side, her history is interesting.  She was said to have been a slave of the Eastmans. Betsy Eastman was her slave owner.  (Betsey, it was revealed in the application jacket was a Chickasaw woman whose husband was an inter-married white citizen.)
Although not much is known of Ellis Johnson the man, his file is rich with data (which I shall put in another blog post)
However the status of the family was part of the greater saga of Freedmen hoping to have issues settled in their nation, along with the land allotments that they were to have received.
His letter above speaks to the frustration that must have been felt during those years of alienation and neglect by both the US government that never enforced the adoption of the Chickasaw slaves. That denial of rights is still upheld to this day.
Posted by Angela Y. Walton-Raji at 9:56 PM 3 comments: