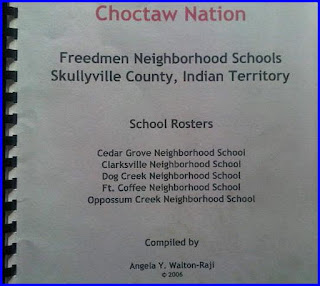 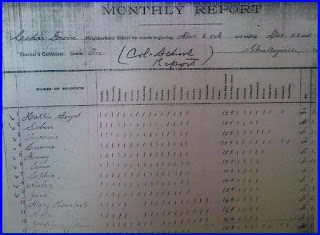 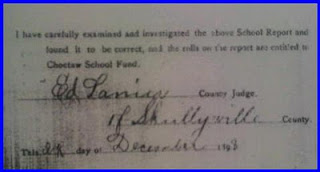 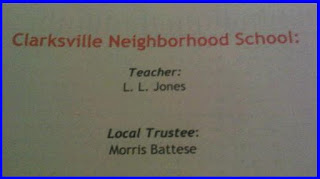 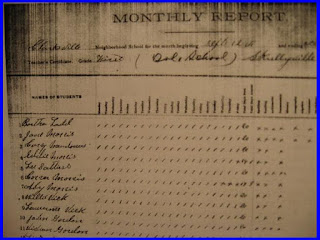 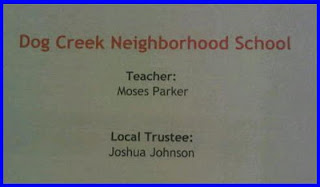 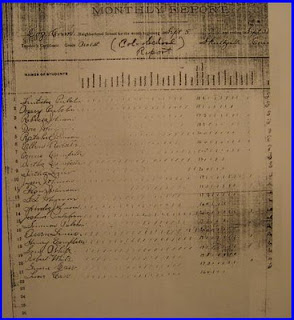 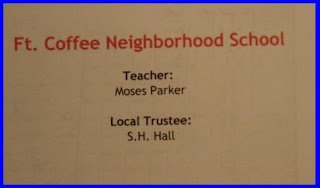 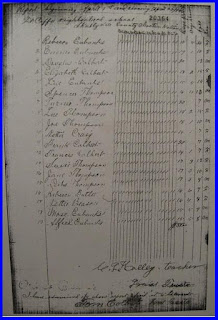 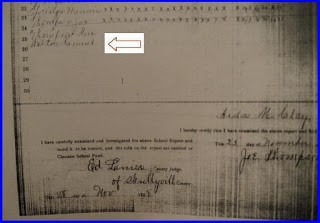 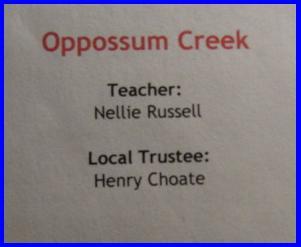 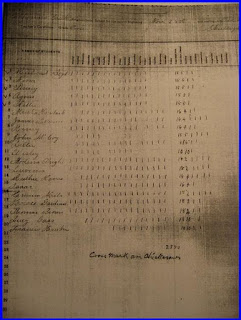 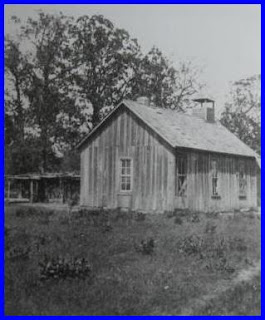 Acts in Regards to Negroes, Free and Enslaved in the Cherokee & Choctaw Nations 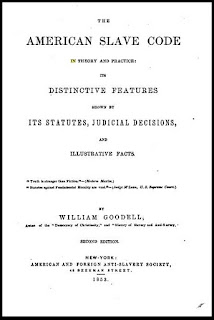 I believe that the beginning of healing comes from truly looking at the policies of the past.
I recently came across the words of William Goodell and his writings. I came across some of the policies that would have had direct impact on the lives of my ancestors living in bondage in Indian Territory. It was important to read them and to learn the lessons by knowing these things.
William Goodell was an abolitionist, a missionary and a reformer. Educated at Phillips Academy, he worked ardently through much of his life for the abolition of the institution of slavery.  He studied the laws and slave codes throughout the country, wrote a detailed book in 1853 called, "The American Slave Code" and the  included in his work were slave codes and policies enacted in Indian Territory.
Surprisingly he included some specific tribal policies of the Cherokee and Choctaw nation in his 1853 book, analyzing slave codes throughout the nations, the details obtained from the constitutions of these two tribes provide a sobering insight into the realities of slavery in Indian Territory. 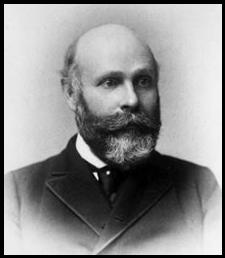 William Goodell, Abolitionist and Author
In his work, he illustrated the policies of the tribes, by using language from the constitution of the two nations, employing the language of acts passed into law.
In the appendix he focuses on the two tribes: 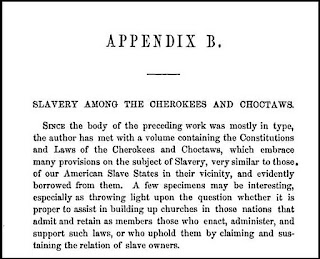 "...all free women except the Africa race" 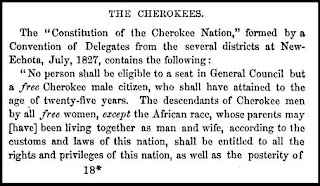 "...punishment not to exceed fifty stripes...." 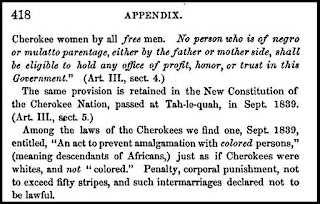 Some aspects of intermarriage were considered acceptable and were considered worthy of legalizing as seen below.  Meanwhile there were also major restrictions placed upon those few who were free in the Territory and also of slaves.

Like the policies of the deep south, reading and education of slaves and also of free blacks was strictly forbidden.

Within the Choctaw Nation there were similar restrictions. Free blacks were not encouraged to settle in the community. 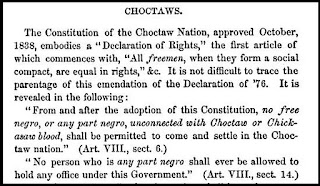 Abolitionists were clearly not welcomed in Choctaw country, and those showing sympathy towards blacks by breaking bread or kindly human interaction were frowned upon and such activities were clearly stated in tribal policies about such interactions. 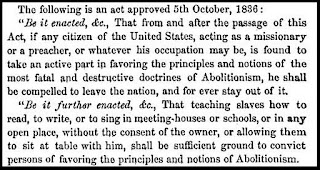 There was some acknowledgement that there were persons of color who had blood ties to both Choctaw and Chickasaw nations. However, those free people of color with no blood ties were informed that they had to leave the nation.

I have often wondered about any slaves who may have gained freedom while being in the nations, what their fate may have been like.  Goodall reveals that it became tribal policy that if there were any who were manumitted by their slave holders, they had to leave out of fear of being re-sold into bondage. 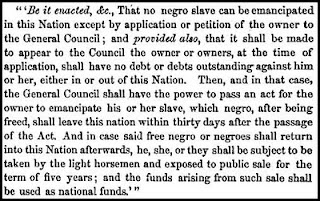 What to Make of These Passages
Reading these passages is sobering but enlightening. It is clear that the "peculiar" institution of slavery was legally sanctioned into tribal culture after the nations had survived the harshness of the removal.  Were all of these policies actually carried out?  That is not certain. Perhaps some were in the early years after their passage, however, after the Civil War, there were clearly persons more persons of color in both tribes, who shared the blood of their masters, who had social relationships with tribal members, and who remained in the only land they knew as home.
Today in 21st century American what does one make of these policies? They provide some understanding of tribal policies today.
These sentiments of 160 years ago, provided the backdrop of "blood politics"  still practiced to this day. These passages show how the dismissal of persons of African descent was viewed as somehow "logical" in the mind of the racial politician.
Today, blood policies that allow persons with less than a droplet of blood (e.g. 1/1000th and less) to be considered "connected" and "legitimate", illustrate that the concept and practice of discrimination towards those once enslaved, is still somehow "normal". These raced-based policies are still considered logical in their way of thinking. And as this has been shown, for this practice has a precedent, going back 160 years.
To the raced based politician and lobbyist, it is no matter to them that in spite of the fact that those who were once enslaved were immersed into the tribe by language, by their life's toil----their mere presence---the logic of their expulsion and their mistreatment has a precedent and still feeds into the logic of the racial political mind.
To the racial politician they feel that this is somehow ok.  Furthermore, the concept that those once enslaved are somehow illegitimate and dispensable is embraced as has been witnessed in recent years. This is a way of thinking that goes back over 160 years.  It ties to a southern slave holding mentality that prevails.
But there may be some enlightened who dare to ask the pertinent questions, but it should be remembered that the beginning of healing comes from truly looking at the policies of the past.
I hope that someday, my brothers and sisters from Indian Country will someday take a look at the past, understand the impact of the past and understand that we all need to grow and move forward. We share the same landscape for our history and we are all strengthened when we walk together. So as we read these texts, we grow and our journey takes a better direction.
Look at the policies of the past..
Read them.
Acknowledge that they occurred.
And grow from them.
We all benefit from that growth, not a portion, not a selected portion -- all of the family grows.
Remember, it was not until 100 years after the Civil War that the US finally began to make the sons and daughters of it  own slaves, full citizens--and that was a mere 40 years ago. And here we are145 years after the Treaty of 1866 was signed---the fate of the descendants of former slaves of Indians is still be addressed by the slave holding tribes.
When do the slave owner's children decide that some sentiments can and should be changed?
Perhaps true healing can now come when the descendants of slave holders, and policy makers address their own history-- for that is when true healing begins.
The children and grandchildren of the enslaved hold no bitterness in their hearts, and in fact often find themselves surprised to learn that these sentiments from the tribes still prevail.
Hands have been extended, yet are there hands reaching back from the tribes?
Only by acknowledging the past and working towards a new future can a "nation" truly progress.
Posted by Angela Y. Walton-Raji at 10:05 AM 9 comments: