Are Civil War Era Ancestors Among Your Oklahoma Freedmen Ancestors? 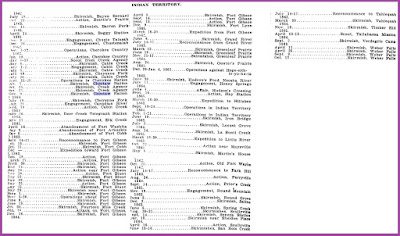 It is hoped that the primary goal of research is to find data to assist in telling the family story. Records from Indian Territory are full of useful data to assist with that goal, but I have noticed that very few researchers discuss Civil War era records. In so many cases, people find Dawes Rolls, and in some cases they will refer to an earlier roll such as Wallace Rolls or Kern Clifton or Dunn Rolls. But frequently records and events from the Civil War are not used as much as they can be.  The Civil War affected everyone, and that included Indian Territory in general, and the enslaved population in particular.  When the chance came as Union soldiers approached a community, the enslaved people found themselves in a new situation. The trajectory of their lives had changed forever, and for many it was the war that brought freedom to their door.

Those enslaved in Indian Territory, like those enslaved in southern states were affected in the same manner. When Union soldiers raided a community some slaves were freed and left those places of enslavement. Others took refuge such as the hundreds of Freedmen did, that settled around Ft. Gibson making it one of the furthest west contraband camps.

In addition there were several skirmishes and battles fought in Indian Territory. The image above was taken from pages 981-982 of the Compendium of the War of the Rebellion by Frederick Dyer.

The Five slave-holding tribes were involved in the Civil War with many confederate regiments, and from which there were only three Union regiments. The other part of the story seldom mentioned were that there were Black soldiers from the same tribes who served in the Union Army. The 1st and 2nd Kansas Colored Infantries consisted of mostly soldiers from the Cherokee and Creek Nations. Later these two units were designated as the 79th and 83rd US Colored Infantries, respectively. In addition to these soldiers were the less mentioned Black soldiers who served in the Indian Home Guards. (Men like Sugar George ended up later serving in their tribal government. Sugar George served as member of the House of Warriors and later the House of Kings, and he was also a member of the board of the Tullahassee Mission School, for Creek Freedmen.) But the strength of these men was demonstrated when they returned from the War as true Freedom fighters, Civil War veterans and leaders in their communities.

The image below reflects battles that were reflected in Indian territory, and neighboring Arkansas as well. Former slaves from the five tribes that held slaves were among the soldiers that fought in these battles. 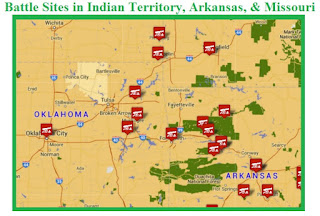 Image from Mapping The Freedmen's Bureau

The Civil War service records capture much personal information on the individual soldiers themselves, and Freedmen descendants are encourage to study the Civil War in depth. There was a large encampment of Freedmen at Ft. Gibson during and after the war. In addition, former soldiers of the US colored Troops hold a wealth of genealogical data as well.

The soldiers came from all of the tribes.

Amos Adair served in the 79th US Colored Infantry.

From the Choctaw Nation came Aaron Newberry who served in the 83rd US Colored Infantry.

Isaac Alexander was from the Chickasaw Nation, and also served in the 79th US Colored Infantry. He later became a leader among Chickasaw Freedmen.

Solomon Renty was one of many Creek Soldiers who served in the US Colored Troops. He is believed to be a part of the Rentie family who later established  and settled in the town of Rentiesville.

Billy Island was in the 79th US Colored Infantry. He first enlisted in the 1st Kansas Colored, and the unit was later changed to the 79th. Further research with Dawes Records revealed that Billy Island was a Seminole Freedmen and a member of the Barkus Band. His name was found on Seminole Freedman Card 621, and was revealed as the father to the children of Easter Island.

Clearly, former slaves from all of the Five Tribes, seized freedom when the opportunity came. The history of the units, the battles and skirmishes in which they fought, and the story of the Indian Territory Civil War events should all be incorporated into the family narrative.

Note that the Kansas Colored was the first black regiment to fight the enemy in the Civil War, as they were in the Battle of Island Mound, in Missouri as early as 1862. By learning more about the battle, one will learn more about the soldier in that unit. For every battle that can documented--there is an opportunity to tell more of the story of the Freedman ancestor's story. If they were there--that is part of their story and should be part of the Freedman family narrative.

The Bureau of Refugees, Freedmen and Abandoned Lands, is commonly known as the Freedmen's Bureau. The Ft. Smith field office of the Bureau, served people in Indian Territory as well as former slaves in nearby Arkansas. Many people were left destitute after the war, and therefore needed food, clothing, and shelter. The Bureau was there to provide assistance to those in need. The document below reflects a list of people receiving rations. And surprisingly more whites and Cherokee citizens received rations than former slave from the Ft. Smith area. 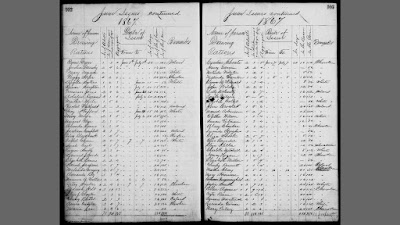 The Civil War era holds so much data for the Oklahoma Freedman researcher, and it is hoped that when you are ready to move beyond the Dawes Records, that military records as well as records reflecting the general population will assist you as you expand the story of the family's history.