A Review of the Dawes Records: Cards, Applications, & the Final Roll 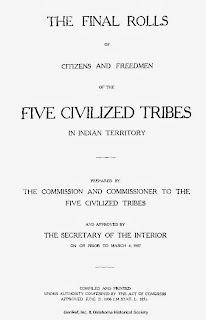 Frequently when the issue of having Indian ancestry comes up, I often see questions from researchers seeking information about families who may have been on the Dawes Rolls. While hoping to determine if an ancestor was part of a Native American community, or had "Indian blood" I often hear that the person has looked for the family on the Dawes Roll. Many people from multiple states often turn to the Dawes Roll, to prove their Indian ancestry.

But in some cases, I have noticed that there is a basic misunderstanding about what the Dawes Roll is, and the history of the large record set known as Dawes Records.

It should be pointed out that these records created by the Dawes Commission, between 1898 - 1914 represent applications made by individuals who were living in Indian Territory in the latter half of the 19th century. The applications were being made to determine who was eligible to receive land allotments prior to the admittance of Oklahoma to the Union. The only exception is that of the Mississippi Choctaws, in which several thousand people in that state also applied under Article 14 of the Treaty of Dancing Rabbit signed in 1829.

But before using the Dawes records, it is necessary to gain a basic understanding of these records, because one must understand the purpose of this record set, to be able to use them correctly. Therefore, I wish to point out some basic facts before looking at the various categories.

Understand the Purpose of the Rolls Before You Look
The Dawes Commission, named after Henry C. Dawes who chaired the commission, consisted of a process that would lead to a redistribution of land to those who already owned it among the Five "Civilized" Tribes. Understand that land was held in common by the Five Civilized Tribes. The Dawes Enrollment process was created to determine who would be eligible for allotted parcels of land. Eligibility involved providing "proof" that one had been a part of the tribe for several decades, and especially in those years immediately following the Civil War. So one had to prove that one had been a part of the Indian Community since 1866. For those whose ancestors were enslaved by members of the Tribes, (the Freedmen)  they had to often provide proof that their former enslaver was a member of the tribe.

Don't Be Distracted by Tribal Enrollment
Unfortunately, many begin the search of the Dawes Rolls to "prove" something and the hope is that the "proof" will bring rewards.

Far too frequently people end up searching the Dawes Records because they only want to enroll in on of the Five Tribes of Oklahoma. The tribes require finding an ancestor on the Dawes Rolls as a step stone to membership in the current tribe today. However, for the genealogist--it is imperative that you separate your genealogy search, from the issue of tribal enrollment. The genealogy research is the key to a unique history and whatever the outcome of the family's application---the history of all persons who went through the process are important, are significant and are equally of value.

If one begins the family history process and then stops searching because you find that can't enroll in the tribe, you are possibly missing critical data on your history. If you stop researching because you can't join a tribe, you might end up short changing your history,  missing your knowledge of your family's resilience, and you might end up neglecting the rest of the story. So, if you are one who has a true interest in your family's history, and you have ties to Indian Territory, and/or Mississippi, these records can open doors to an amazing history for you.

Regardless of what category your family had after the process ended--your history is important, and whether your ancestors were listed as citizens "By Blood", "Freedmen" "Inter-married whites", "Newborns", or "Minors". All of these categories reflect a rich history that should be embraced as being significant, as being noteworthy and should be embraced as being valuable. All of these categories put your family on a unique historical landscape on the western frontier and all provide fascinating glimpses into an under-studied and under researched history.

Study the Records and Not the Rolls
The Dawes Rolls were the final part in a process that took many years. The document was eventually presented to Congress as a Senate Document. However, the critical records are not the family's name on a list. The critical records are the Enrollment Cards, and the Application Jackets. The National Archives Publication Number for the Enrollment Cards is M1186.  The Application Jackets publication number is M1301, and the Final Roll publication number is T529.

At the same time, it should be noted that the names of the various categories can often be misleading. For example, if one had ancestors who had been enslaved, chances are that they may have been eventually been placed on the Freedmen Rolls. This ancestor might have had blood ties, to the tribe as well, but during that era, having a once enslaved parent often put applicants on the Freedmen Roll, no matter what the ties were to an Indian parent. Thus being on the Freedmen Roll did not necessarily mean that there was no Indian ancestor.

Another example is that of Minors and Children. Minors and children rolls were created as a way to add children to the rolls of admitted citizens who were born after the parents initial interview, but who were determined to also be eligible for enrollment. Note that this was before the process had closed. At the same time, there were thousands of children who were on the regular cards, who were born before the family went through the enrollment process, so their names are not on the Minors or New Born cards. They are on the initial cards with their parents.

I am presenting one family to show how the data is reflected in the various records. The sample family is the family of William Folsom, found on Choctaw Freedman Card #729:

It should also be noted that a line has been drawn through the name of Annie Folsom, the wife of William. She was alive at the time the time of the initial application. Thus her name was placed on the enrollment card, However, before the final decision was made by the Dawes Commission, her name was removed as can be noted on the card, where her name appears with a line drawn through it.

With those whose ancestors were enslaved, the name of the former slave holder is noted on the card. This was essential for the proof that one was enslaved by a member of the tribe. On the front of the card, William Folsom identifies his slave holder as Zed Harrison, But on the back side of the card, the person who enslaved his parents was Israel Folsom a leader in the Choctaw Nation. Note also that Freedman Cards are double sided, while other categories are not double sided cards. 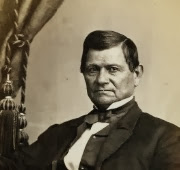 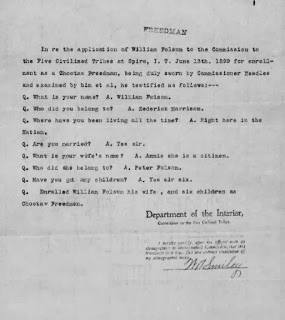 Note that since Annie had died, a document reflecting her death was included in the file. 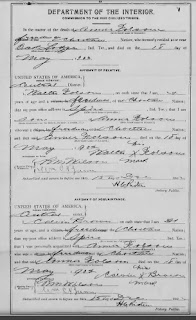 A memorandum was also included in the file of William Folsom, noting the family that would eventually end up on the Final Roll. 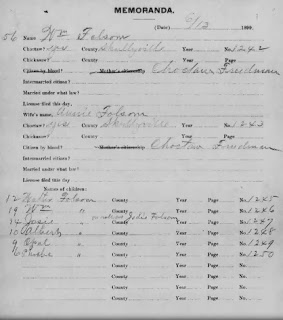 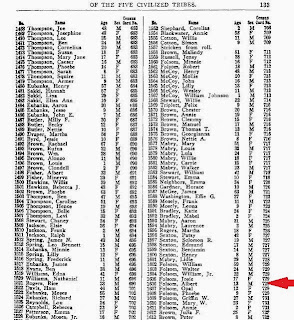 Arrow points to Wm. Folsom Family on the Final Rolls

Note that the Final Dawes Roll is a free standing document. In fact it is a 634 page book of all of the names of persons who were approved and who were determined to be eligible for enrollment. It is also categorized as National Archives Publication T529. Other records such as Enrollment Cards, Application Jackets and all of the many parts to those files are Dawes Records but the Dawes Roll. refers to the page where the family name actually appears.

Allotted Land - The Final Part of the Dawes Process

Another set of useful documents is a record set known as Applications for Allotments, which were completed when approved citizens made the formal application for their land allotments and the tracts of land were assigned to them. Those records are now fully digitized and reside on Family Search.

William Folsom applied for his own land allotment and then for each of the children whose names were also on his card. This record set provides the answer to the question that many Dawes enrollees descendants have wondered for many years. That question is "Where was the land that they received?" These previously un-digitized records now point the researcher to the exact spot of the ancestors' allotted land. 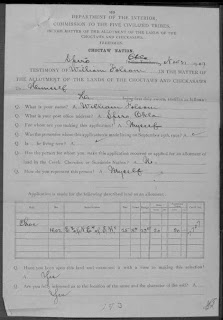 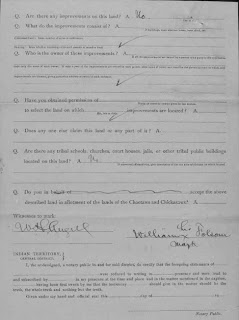 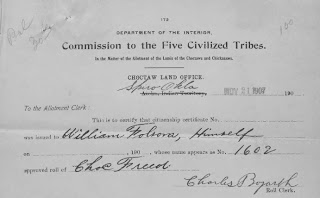 The Dawes Records are rich and full of data. The stories to be told are there, and hopefully this brief description will provide an overview for those who have ties to Indian Territory and today's Oklahoma, and parts of Mississippi.

A follow up article will include samples of documents from all of the categories.