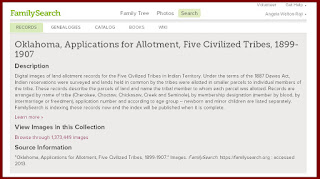 An exciting new record set has recently been digitized that will enhance the research of all interested in Indian Territory and early Oklahoma history! And even better news---all of the more than 1 million pages are online and can be accessed without cost. They are free!

This new record set is known as the Applications for Allottments, Five Civilized Tribes 1899 - 1907.

For those who research the Dawes Records of the Five Civilized tribes, the recently digitized collection at Family Search will open doors for new sources of information for family historians. In addition, these records should be considered a companion data set to the Dawes Records, because the files found within this record set, correspond to the Dawes files.

Now for clarification the most commonly used Dawes Records primarily consist of Enrollment Cards, Application Jackets and the Final Rolls. Of course, all of these records were part of the process that lead to the allotment of land. Those lands once held in common were allotted to individual members of the tribe. Those who were deemed eligible, received their parcels of land as part of this process.

There are thousands of people who descend from those who were allotted land. Many researchers who find their ancestors among the Dawes records often ask the question: "I wonder where their land was, and how I can trace what happened to it."

Sample Case.
Samuel Walton was a Choctaw Freedmen whose family data was put on Enrollment Cards #777  of Choctaw Freedmen. Along with Samuel was his wife Sallie, his son Sam Jr., his son Houston, and a step-daughter Louisa. To show how every person has an allotment record, the case shown below is that of Samuel Walton Jr. (Sam Jr. as he was often called, was the son of the elder Samuel, who made the application for every person in the household.)

Allotment File of Sam Walton Jr.
Samuel Walton Jr.'s information is found on Choctaw Freedman Enrollment Cards #777. But his allotment file is found under his Dawes Roll number 3750. Inside of that file is a form with some basic data, that was provided by his own father Samuel Walton Sr. 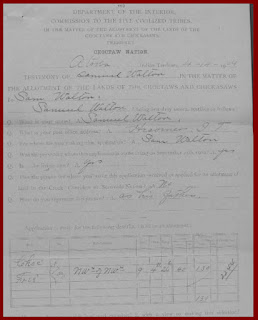 This form also addressed issues pertaining to the land itself, including any improvements that may have been made upon the land.

The plat map reflecting the land for Sam Walton Jr. is found in the file. 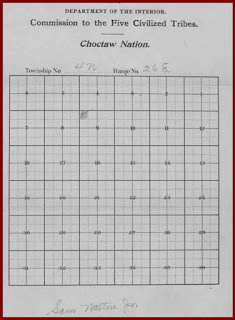 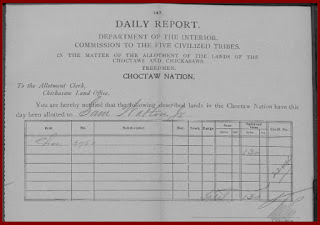 At the time of land allotment, certificates of citizenship were also given to those receiving their allotments.

Three years later a land patent was issued to Sam Jr and like some of the other documents, it was still signed by his father, the elder Samuel.

This collection is extensive!! All groups found within the Five Tribes and all categories of people who were allotted land are included in this amazing collection. And there are more than 1 million digitized pages to explore! 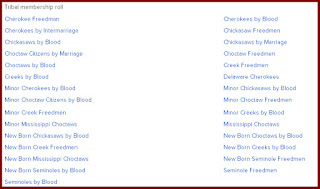 Finding the Family File
To locate an ancestor's file one must use the Dawes Roll number instead of the Enrollment Card. Each person whose name appears on the family card, will have a separate file, so even in cases where there are small children on the Enrollment card, the official roll number will be file number to find the Allotment application.

There are more than 1 million records to explore, and incredible gems are found within these files. With the case of Sam Walton Jr., seeing the original signature of his father (my gr. grandfather) confirmed what was always believed--that he was a literate man. This man born a slave in the 1840s, was able to read and write and signed several of the documents in this file as well as the files for the rest of the family.

Special thanks to Family Search for digitizing these little known records. Hopefully these Allotment records will open new doors and reveal more about the lives of those who lived in Indian Territory and who were citizens of the Five Civilized Tribes.