Enslaved by the General---The Slaves of Gen. Douglas H. Cooper

In 2011, researcher Terry Ligon wrote an article about General Douglas Cooper of the Chickasaw Nation. Recently while I was going through slave schedules of Indian Territory, an image caught my attention. I took note of the people enslaved by Douglas H. Cooper in 1860. At the time, he resided in the Tishomingo area of the Chickasaw Nation and he held eleven people enslaved at that time. 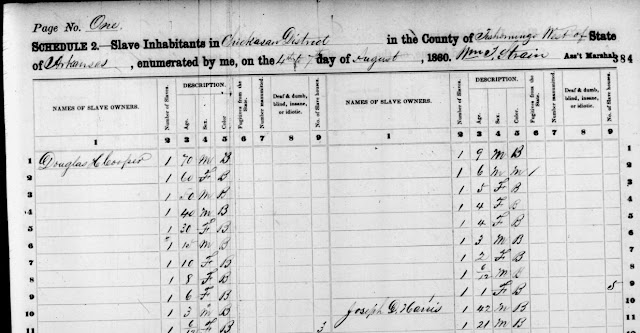 One cannot help but feel compassion for the 70 year old man and the 60 year old woman whose lifetime was one of enslavement and who by their ages, one knows that they were brought to the Territory while young and in their prime of their life with no future. Likewise one cannot help but also feel for the children, held enslaved by the same man. Their childhoods were robbed and they were doomed to a future of toil for the same man and his family. 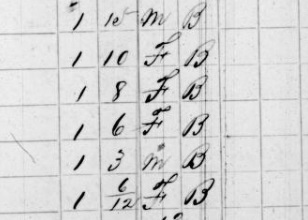 Thankfully, a war would erupt a year later, and though Cooper would emerge to be a general in the Confederate Army, directing the actions of the Choctaw-Chickasaw Mounted Rifles, his side would lose, and at last the family he enslaved, had a new life of freedom. Though the war ended in 1865, they would not officially have freedom until 1866 when the Treaty of 1866 was signed abolishing slavery in the Chickasaw Nation.
Language from the treaty:

'Article II. The Choctaws and Chickasaws hereby covenant and agree that henceforth neither slavery nor involuntary servitude, otherwise than in punishment of crime, whereof the parties shall have been duly convicted in accordance with laws applicable to all members of the particular nation, shall ever exist in said nations.

'Article III. The Choctaws and Chickasaws, in consideration of the sum of three hundred thousand dollars, hereby cede to the United States the territory west of the 98 west longitude, known as the leased district, provided that the said sum shall be invested and held by the United States, at an interest not less than five per cent, in trust for the said nations, until the legislatures of the Choctaw and Chickasaw Nations, respectively, shall have made such laws, rules, and regulations as may be necessary to give all the persons of African descent, resident in the said nations at the date of the treaty of Fort Smith, and their descendants, heretofore held in slavery among said nations, all the rights, privileges, and immunities, including the right of suffrage, of citizens of said nations, except in the annuities, moneys, and public domain claimed by or belonging to said nations, respectively; and also to give to such persons who were residents, as aforesaid, and their descendants, forty acres each of the land of said nations on the same terms as the Choctaws and Chickasaws, to be selected on the survey of said land, after the Choctaws and Chickasaws and Kansas Indians have made their selections as herein provided; and immediately on the enactment of such laws, rules, and regulations the said sum of three hundred thousand dollars shall be paid to the said Choctaw and Chickasaw Nations in the proportion [193 U.S. 115, 118]   of three-fourths to the former and one-fourth to the latter,-less such sum, at the rate of one hundred dollars per capita, as shall be sufficient to pay such persons of African descent before referred to as, within ninety days after the passage of such laws, rules, and regulations, shall elect to remove and actually remove from the said nations, respectively. And should said laws, rules, and regulations not be made by the legislatures of the said nations, respectively, within two years from the ratification of this treaty, then the said sum of three hundred thousand dollars shall cease to be held in trust for the said Choctaw and Chickasaw Nations, and be held for the use and benefit of such of said persons of African descent as the United States shall remove from the said Territory in such manner as the United States shall deem proper,-the United States agreeing, within ninety days from the expiration of the said two years, to remove from said nations all such persons of African descent as may be willing to remove; those remaining or returning after having been removed from said nations to have no benefit of said sum of three hundred thousand dollars, or any part thereof, but shall be upon the same footing as other citizens of the United States in the said nations.' [14 Stat. at L. 769.]


So, questions emerged for me---Were those once enslaved by Cooper, still in contact with them after freedom came?  Did they also have contact with Mary, Joanna, and others cited in Terry's post? Did they know the daughter of Cooper who later developed mental problems later in life?

More important questions also arose-----How were they affected by the relations between Chickasaw freedpeople and those who once enslaved them? For many years Chickasaw Freedmen were disenfranchised by their own nation. Did many of the Cooper slaves remain in the area, or did they leave?

Were they associates of other mixed blood Black-Chickasaw and Black-Choctaw families like the Chicos (Sheecoes)? The responses to Terry Ligon's original article (found in the comments on his blog) revealed that there are those who descend from the Cooper family, and there were also other mixed blood families facing similar challenges to identity and status.

I did find one significant----did the enslaved remain in Tishomingo--or did they leave the area? One answer is found in the northern part of the Choctaw Nation, in Cavanaugh, Indian Territory. There, Mary Helena Jones appeared in front of the Dawes Commission and applied to enroll herself and her four children, Elijah, Emma, Silas and Tener. They were enrolled on Choctaw Freedman card number 1469. Mary was only in her twenties and was born after slavery ended. But an interesting note appears on her card---that Mary and her children were "descendants of General Cooper's slaves." 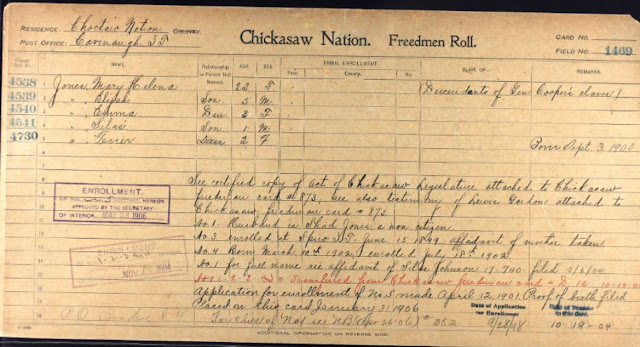 A close up view reflects the Jones family and their connections to General Cooper.

Mary's mother was a woman called Maggie Johnson, and it is noted on the back of Mary's card that Maggie was enslaved by Douglas Cooper.

On mother Maggie Johnson's enrollment card it is clear that there was a connection to Douglas Cooper. Her name is found on enrollment card number 1468, and Douglas Cooper's name appears as the slave holder.  Likewise, on the back side of the card, he was the one who had also enslaved her parents.

Interestingly, her parents' names were Lewis and Maria Gordon. They chose not to use the name of Douglas Cooper the one who once held them enslaved.

Living not far away from Maggie, was a sister Lucy Givens, whose parents were also Lewis and Maria Gordon.

And not surprisingly another member of the family lived in Cavanaugh---Annie Furr, daughter of Lucy Givens.

From the Braden Community

Not far from Cavanaugh, is the community of Braden, also in the northern part of the Choctaw Nation. This community was not far from the Givens and Gordons, and there, one finds another daughter of Lewis and Maria Gordon. Her name was Mary Ann Ellis whose daughter Frances had married into the Cole family. 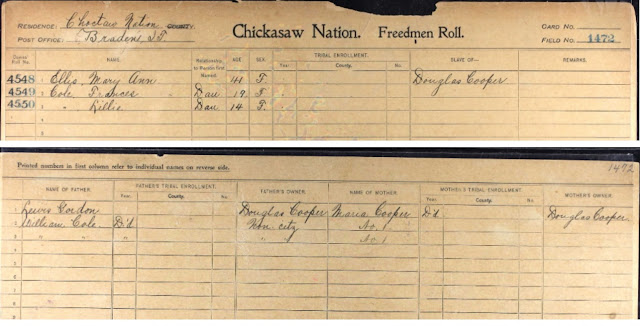 And the Gordon family continued through the family of Silla Clark. Silla was also a daughter of Lewis and Maria Gordon, all enslaved by Douglas Cooper. 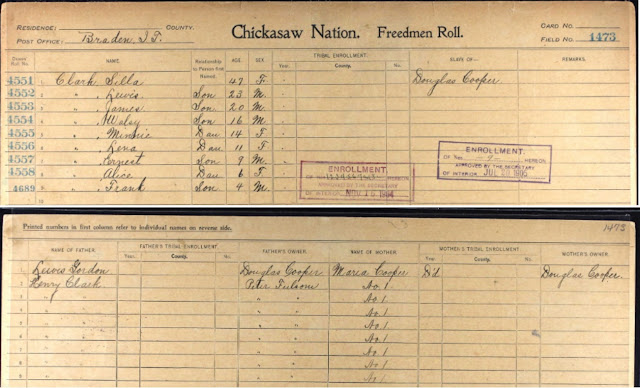 This effort to find some of the families enslaved by Douglas Cooper has been an interesting one. I also ended up recognizing the surnames of families that later migrated across the state line into western Arkansas and have settled in nearby Ft. Smith. Gordons, Furrs, Givens, Coles and others clearly had left Tishomingo, and chose to move far away from the community of Douglas Cooper. They also chose not to retain his surname.

A final glance at the records indicated that there might be another elder to find---Lewis Gordon lived to see Freedom!

He was once directly enslaved by General Douglas Cooper, and he too, in the 1890s was living in Cavanaugh---in the Choctaw Nation. Clearly, it was important for him and his descendants to leave the Chickasaw Nation  which was once home to them, and they formed their new home in the northernmost part of the Choctaw Nation in Cavanaugh and Braden. He applied in 1898 at the approximately at the age of 89 years. But he died before the rolls were closed, and as a result, his card was canceled but thankfully significant data survives.

Lewis Gordon provided the names of his parents, Bob, and Patience. He did not provide a surname for them, but nevertheless he said their names. Noting Gordon's age, he was not only enslaved by Cooper, but he would have been one of the many African people transported west during the removal--the Trail of Tears. Whether or not Bob and Patience, his parents, came with him or not, is not known.

However, the lineage of Lewis Gordon is documented, nevertheless. Clearly the legacy of this family  extends beyond Douglas Cooper the confederate general and slave holder. These families moved away when it was safe and wise to do so, planting their roots on different soil, and these families survived, and thrived, and hopefully their legacy will continue with vigor and strength.
Posted by Angela Y. Walton-Raji at 5:15 PM 1 comment: