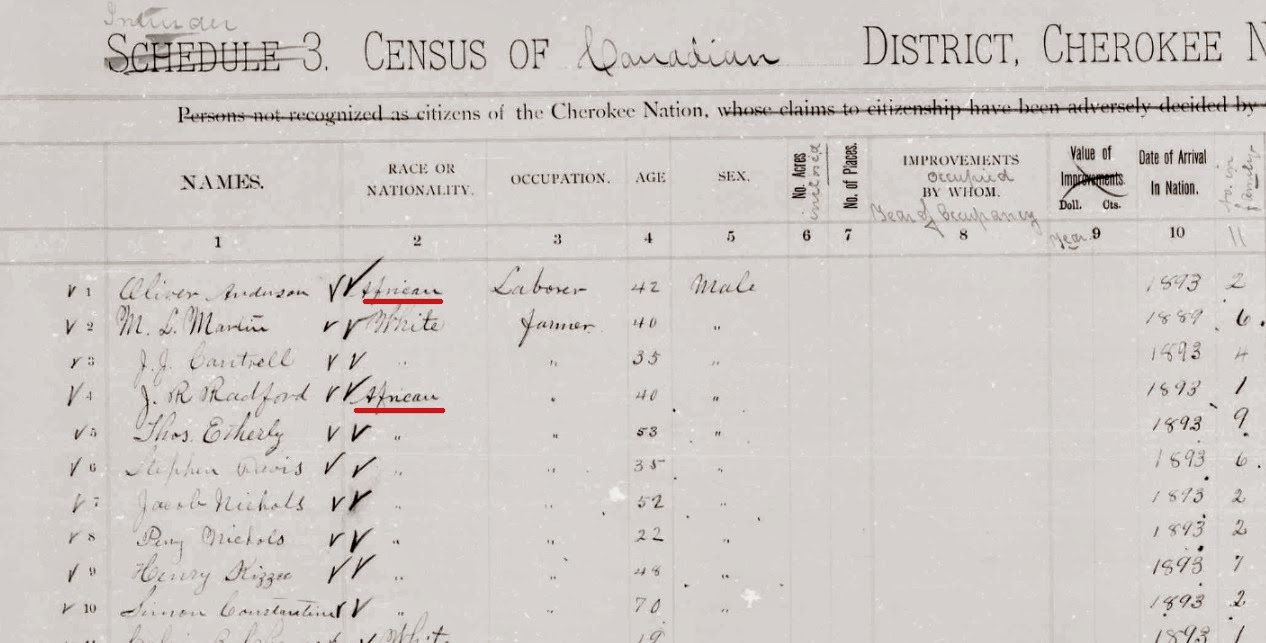 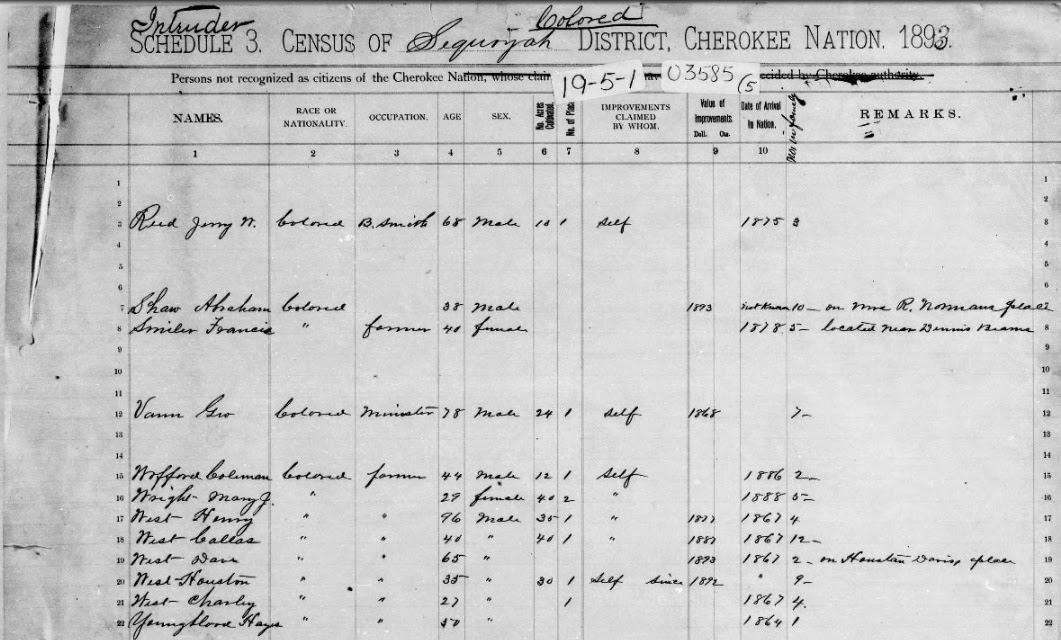 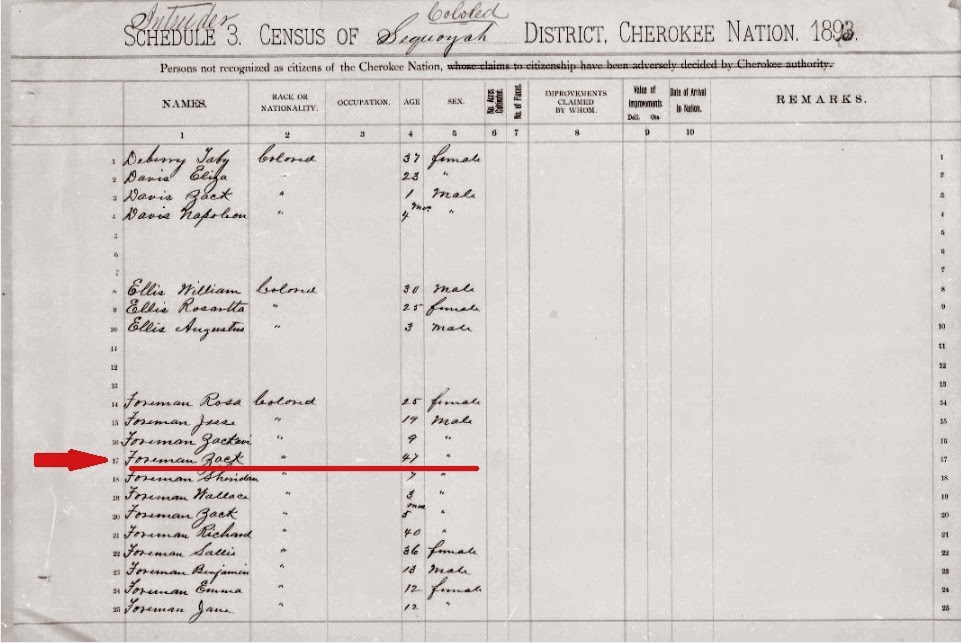 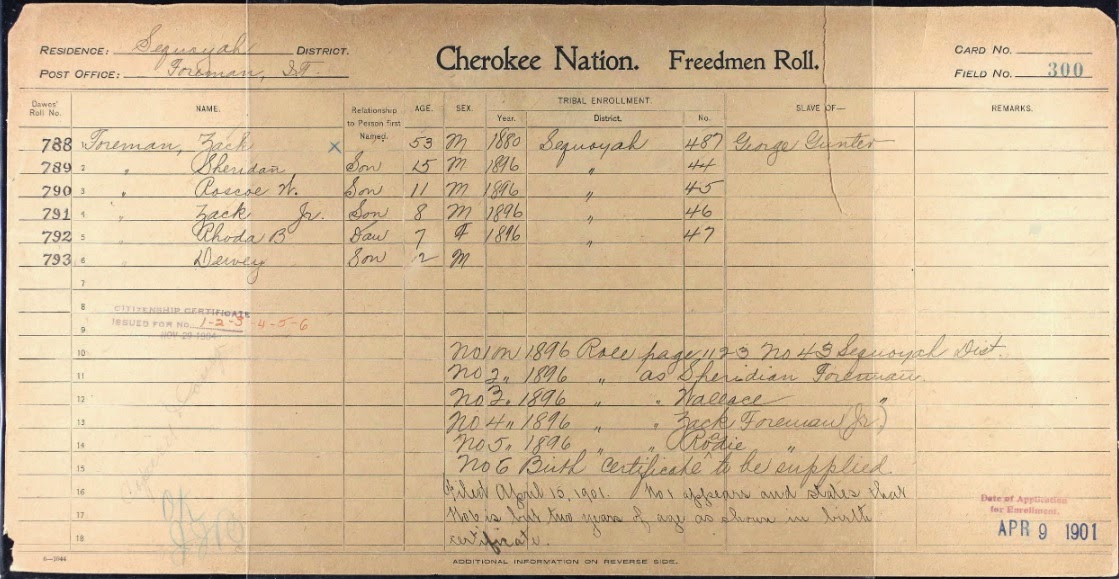 These images of the Intruder Census Rolls from the Cherokee Nation will be a valuable asset to researchers looking for additional information on their families in Oklahoma. Many researchers whose families originated in Arkansas, Kansas, Louisiana and Texas might find their ancestors among those intruders and it is hoped that many will study these records in detail.
Posted by Angela Y. Walton-Raji at 11:35 AM No comments: 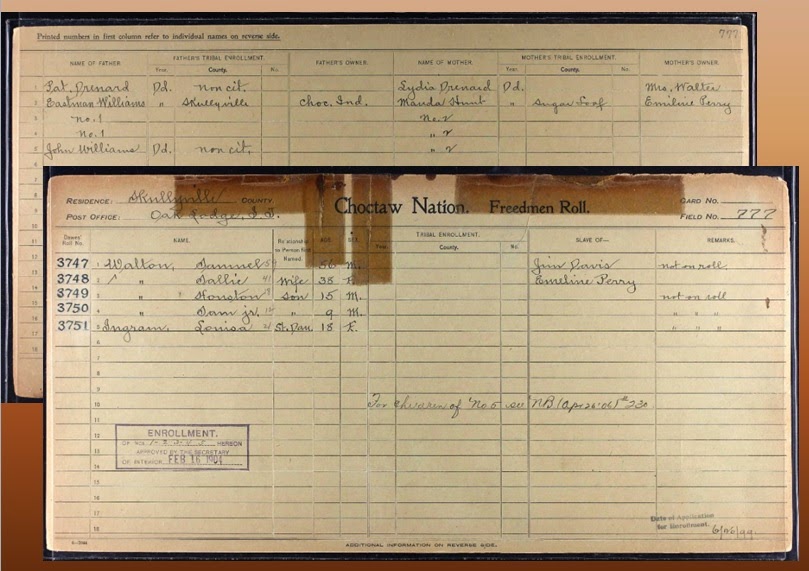 Several months ago, I had a chance to speak with a representative from Ancestry, who shared with me that some good news was going to come out in November for Oklahoma researchers. Well, November has arrived, the good news has now been made public. Ancestry has acquired the Dawes Enrollment Cards, and now has all of them fully scanned in color! Although there are other online sites that contain Dawes cards, this is a treat to see the original image in full color. I was also pleased to learn that all of the cards were scanned in color, including the Freedmen of the Five Tribes.

What makes this special is that with many of the documents originally scanned in black and white, such as that of my gr. grandparents, (see images above and below) the place on the card where some tape was applied, can now be seen. On the black and white scanned image, the tape comes through as a solid black mass, and one cannot see through the faded transparent tape to view the words. (See two images.)

And what also makes having the color images available is that small details now appear more clearly on the card, some of which were a bit hard to see without tweaking the image. It should also be pointed out that there are many cards that had annotations made in different colors. The roll number was actually stamped in blue ink, and now with the color images, that can be seen. 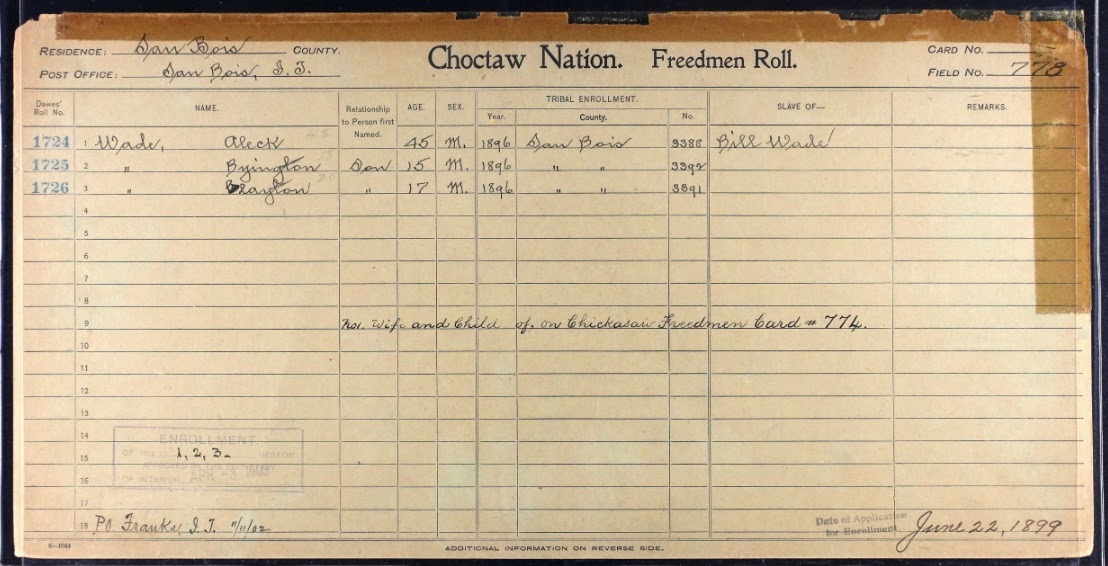 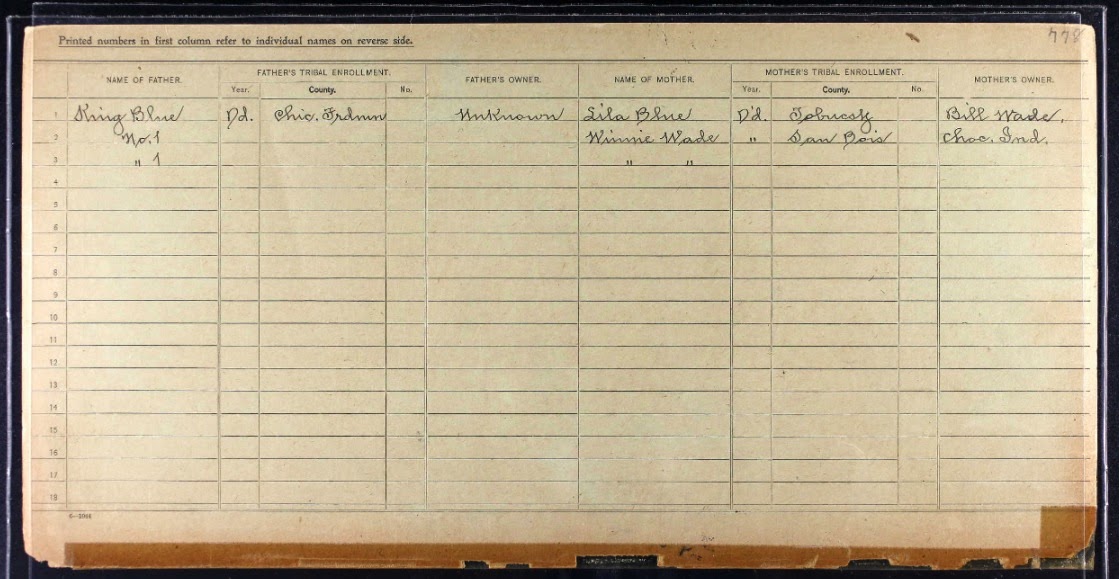 
Several years ago, I noticed that the first card among Freedmen cards in almost every tribe were often in very poor condition. Some were perhaps in poor condition because of exposure to sun, or had been damaged by some kind of liquid. So I was anxious to see how the new color images appeared with color scanning, so decided to look at Card No. 1, of the Choctaw Freedmen, that of Simon Clark. I know that his card had seen a lot of deterioration, and now with the color image, all of the markings appear much clearer. 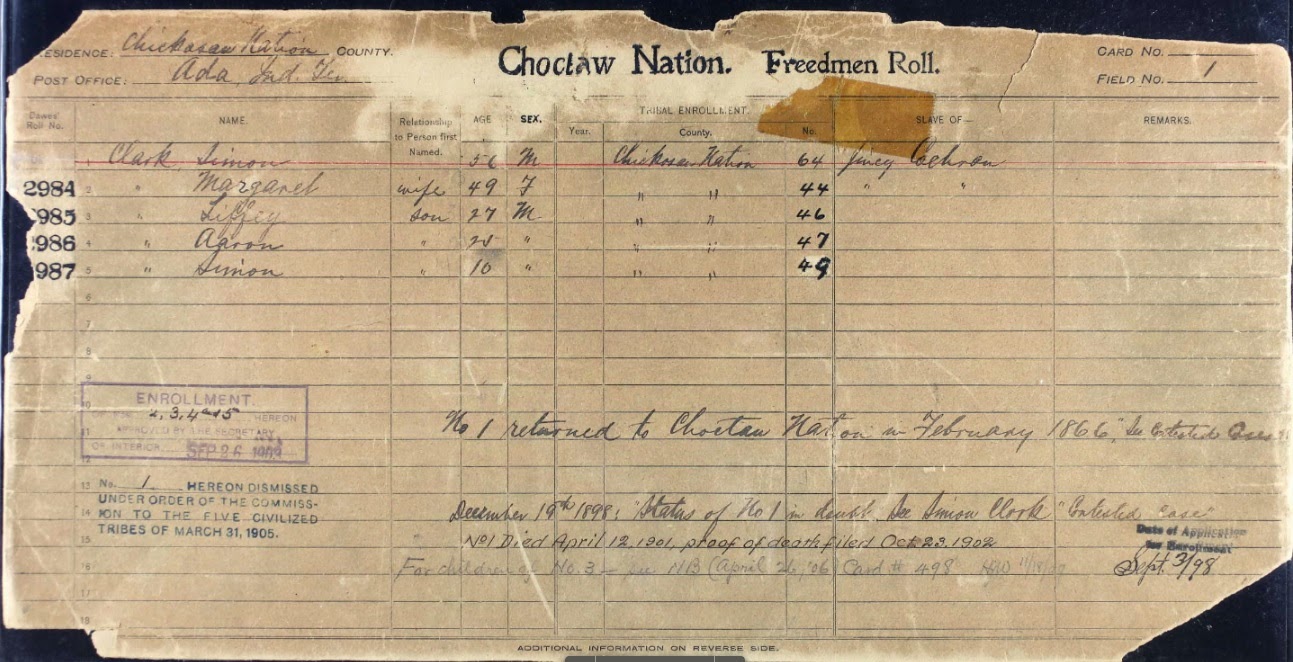 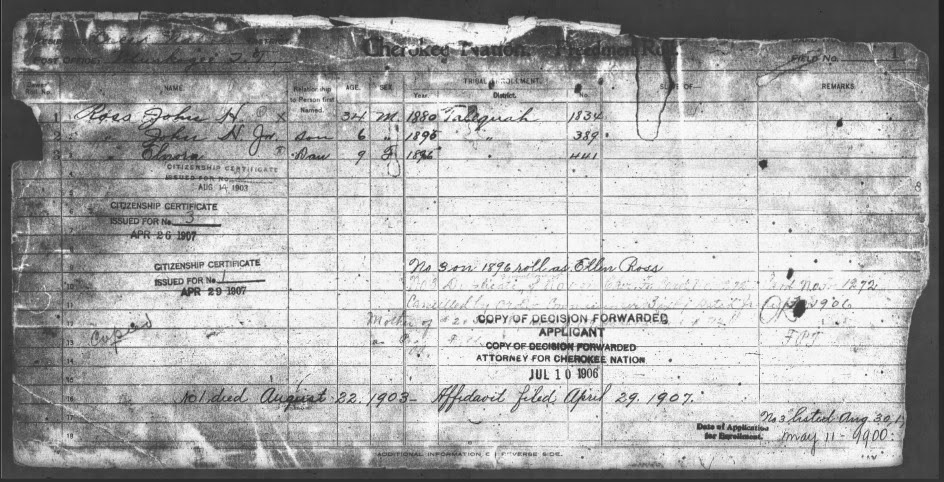 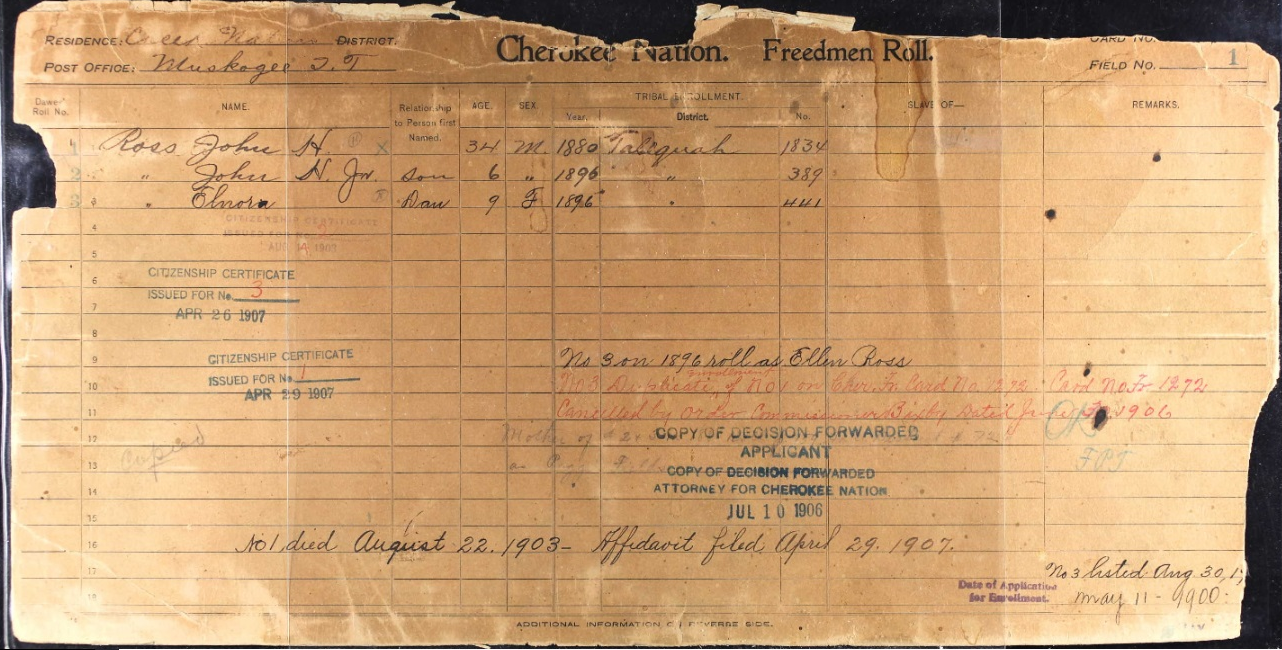 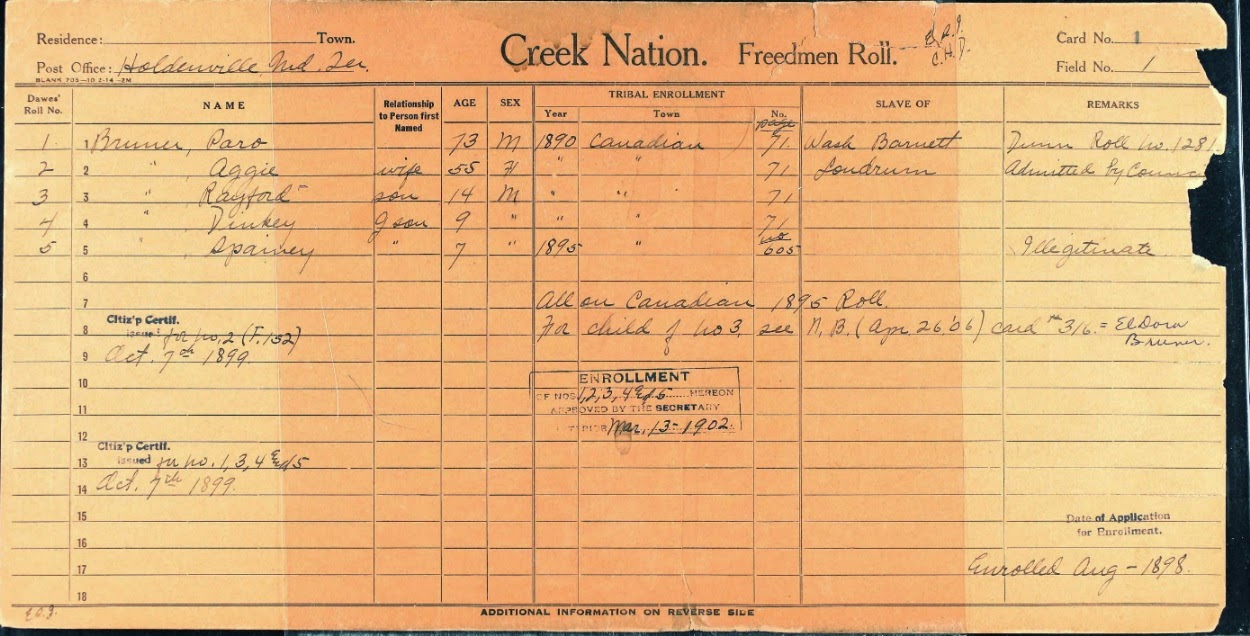 The numbers on the Ancestry index for Seminole Freedmen says 600-699,

However, when looking at the first seven images, they are actually the very end of the Seminole By Blood cards. With image #8 in that set of cards designated as Freedmen 600-699, the beginning of the Freedmen cards appears on what should be #609. In reality it is Freedman Card #1, that of Ceasar Bowlegs.

So at first the early numbered cards for Seminole Freedmen might appear to be impossible to find. However, they are there, and are found in the subset erroneously labeled "Seminole Freedmen 600-609."

In all other cases the scanning is accurate, and it is still quite wonderful to see these records now in their original condition! Hopefully for some new data will be extracted previously unknown, or unseen. Having access to these color images, breathes new life into these valuable records!