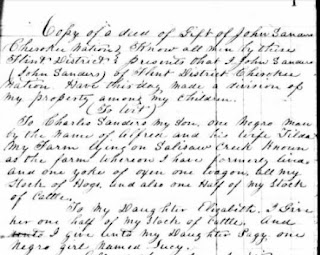 (Transcription of two paragraphs from above image):

"To Charles Sanders, my son, one Negro Man by the name of Alfred, and his wife Tilda. My farm lying on Salisaw Creek, known as the farm, whereon I have formerly lived, and one yoke of oxen, one wagon, all my stock of hogs, and also one half of my stock of cattle."

"To my daughter Elizabeth, I give her one half of my stock of cattle, and I give unto my daughter Pagy, one Negro girl Lucy."

While examining the thousands of pages from the Cherokee Nation that were digitized 2 years ago, I was surprised to come upon some estate record. This set of records comes from an Oklahoma Historical Society microfilm, CHN 38 and is entitled Old Marriage Records Flint District. However, it was a surprise to see that within this small set of records a ledger that begins with a last will of a Charles Sanders leaving his children enslaved people as part of their inheritance.

A majority of the records entered into the ledger were dated after the Civil War, but this document from 1847 is rare for many reasons. First, it is uncommon to find estate records from pre-Civil War Indian Territory. The county system and court-house repositories from that time period do not exist and if there are probate records of any kind from the Territory, they may be private collections and are not in the public domain.

Secondly, to find a document prior to the Civil War from Indian Territory reflecting ownership of slaves by anyone living in the Territory is rare. Slavery as an institution practiced on the western frontier is not widely studied and rarely taught. Slavery in the Cherokee Nation, and likewise in the other tribes where slaves were held in bondage, is not included in the historical narrative of the tribes themselves, so it is truly remarkable that such a document survived, and that such a document was microfilmed.

Thirdly, the discourse of slavery in the Territory and has yet to unfold. Some of it has become known to a larger audience when descendants of the enslaved have sought to have their rights as citizens recognized. Similar to that in the deep south, true historical scholarship on American slavery unfolded as the occurrence of a struggle for rights of oppressed African Americans increased. Perhaps as the struggles of oppressed people increase, so too one sees an increase in the history of the same population.

Several years ago I studied runaway slave ads in Indian Territory press, and have found some in the Choctaw Intelligencer, as well as early issues of the Cherokee Phoenix & Indian Advocate. The discussion of slavery brings about discomfort for many. But discomfort among those of the dominant culture is also the discomfort that brings about change. It is that discomfort that makes people examine their own values, and pre-conceived notions about people whom they have never sought to know, and often later learn that there are more similarities than differences.

In the earlier days of the "current" movement from the Freedmen community, many would whisper that Freedmen were descendants of "slaves" as if that in itself put the shame upon those who never enslaved themselves--and many would use the term as if the ancestors of the Freedmen, had committed the crime of their enslavement themselves. The fact being of course that many (not all) of the ancestors of the dominant culture were the actual perpetrators of the heinous act of enslavement of others.

But---with more exposure, and voice from the oppressed, comes the courage to look at the history with a different eye. Not an eye of discomfort and distance, and disdain, but with an eye of comfort--with oneself and one's ability to see oneself, and to see the humanity of those once oppressed as part of the human family. 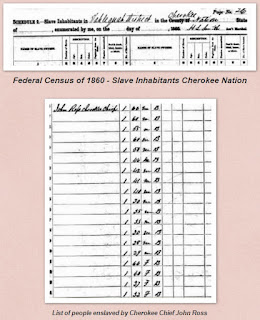 Hopefully more documents will emerge to tell some of that story. The purpose of studying them, is not to accuse, but to learn more about the human family of which we are all a part. 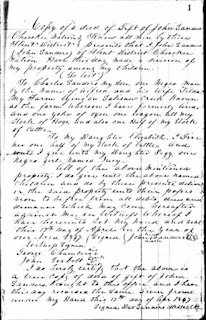 (Entire image. For citation, see above)

Posted by Angela Y. Walton-Raji at 8:41 AM No comments: