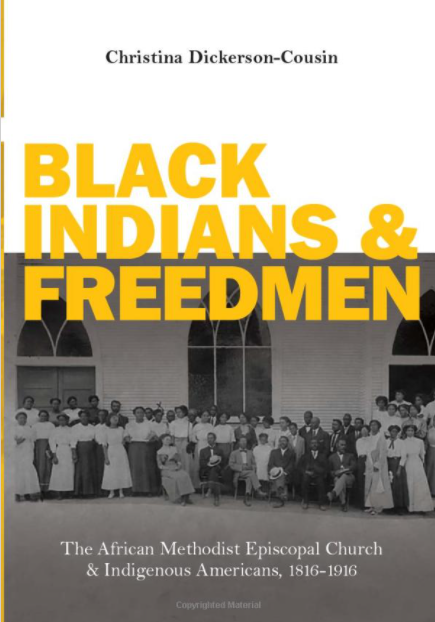 Black Indians & Freedmen
"By the time of emancipation, the enslaved population among the Five Civilized Tribes had become a hybrid people with both African/African American and Indigenous language culture and ancestry. After emancipation these Black Indians attempted to build lives for themselves in Indian Territory. They also sought to validate their Indigenous heritage by gaining formal citizenship within the Five Civilized Tribes. The tribes sometimes resisted such inclusion and denied that they had any cultural or blood ties to those they had formally enslaved."
-Christine Dickerson-Cousin, author
* * * * *
A fascinating new book by Christine Dickerson-Cousin has recently been published. Entitled "Black Indians & Freedmen. The African Methodist Episcopal Church & Indigenous Americans, 1816-1916.

Author Christina Dickerson-Cousin has examined the role of the AME Church and the influence that the church had on both Freedmen and native communities throughout the Territory. The book eloquently presents fascinating pieces of data about people from all of the Five Tribes, and she has crafted a story opening a new chapter in the story of Freedmen.

When discussion usually emerge about the impact that various church missionaries had in Indian Territory the story is one usually of the influence of Presbyterian Church, or the Baptist Church. Institutions such as Oak Hill Academy established by Presbyterians, or Evangel Mission established as a Baptist school are well known.

But one will learn about two more institutions seldom mentioned in Oklahoma history, nor in Freedmen history specifically. The mention of two AME church institutions are found among the many gems in this book. There is the final-chapter story of of the old Tullahassee Manual Labor School, which is found in the story of Sisson Industrial Institute  and the story of Flipper-Key-Davis University.

Some have asked questions about what eventually happened when the Tullahassee School ceased to be a school for Freedmen. The answers are found in this book, when the author points out that the school later became Flipper-Key-Davis University operated by the AME Church.

Some smaller gems appear when names of some additional Freedmen groups are mentioned in passing, such as the CCCA--the Choctaw Colored Citizen's Association and the Choctaw-Chickasaw Freedman's Grievance Association. The mere mention of these little known groups in this book, provides opportunity for researchers to go and find information about the group, the members and some of their activities. Such an article was found in a newspaper from Broken Arrow, in 1905. 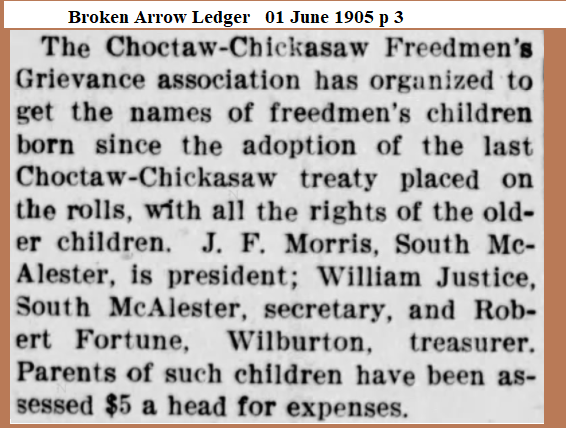 The Choctaw Colored Citizens Association also advocated for the rights of Freedmen and an account of some of their efforts are found in a publication out of Atoka in 1905. 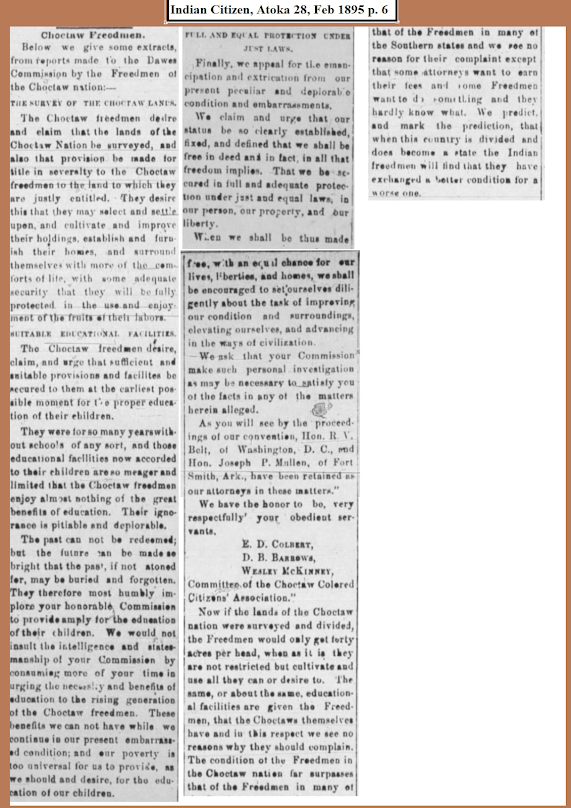 The book is quite useful to have in one's library, because it reveals the rolls that many other people took in their church, but also the greater community. Persons such as Emma Thompson Hampton, (daughter of Freedmen Pink and Lucy Thompson), and also Annie Keels, and both were mentioned reflecting other dimensions of their lives. The immersions of both into their communities and not only the involvement in church affairs but their status as people living within thow distinct cultural groups---their tribal community and also an African community.

"By the time of emancipation, the enslaved population of the Five Civilized Tribes had become a hybrid people with both African/African American, and Indigenous language, culture and ancestry."

She goes on to describe how Freedmen attempted to build lives for themselves, in the Territory where they were born. At the same time the author points out how the Freedmen sought to "validate their Indigenous heritage" by seeking citizenship in the nations of their birth. It was pointed out that the tribe sometimes resisted the inclusion of the Freedmen, and occasionally denied that there was any  cultural or blood ties to the people that they had once enslaved. Because of this complex immersion into the two worlds, many Freedmen welcomed the presence of the AME Church and many found not only a church home, but also found a method of negotiating life in an occasionally hostile territory.

AME Church and Black Towns
One portion of the book also focuses on the role that the AMEChurch had in the development of Freedmen communities--the historic black town.. In one chapter the author goes into depth about how the AME Church helped established some of the Black Towns, and contributed to the success of those towns. She specifically mentions AME church members who were town residents of Red Bird, Clearview, Tatums, and Grayson.

It is a welcomed piece of scholarship that belongs in the personal libraries of many with ties to the Territory. The book is available on Amazon, and also directrly from the University of Illinois Press.
Posted by Angela Y. Walton-Raji at 2:47 PM No comments: