Irony and Opportunity from the Chickasaw Nation

A recent post from Chickasaw TV website recently reflected a revised version of their history, presenting the Chickasaw community as a place where enslaved people found "refuge".

Knowledge of this statement came while I was in the midst of a conversation with a young college student who is ardently researching his own family of Chickasaw Freedmen, In the midst of our cordial dialogue he was casually surfing and suddenly exclaimed "Whoa, the Chickasaw Nation has an article about slavery on their website! When did that happen?" He went to the then scrolled and was shocked to see what was stated, and suggested that I also get on the site, which I did.

And there is was, with the blatant headline:

What in the world was this?

A former slaveholding tribe, the same tribe that produced 4 regiments of Confederate soldiers that fought in the Civil War to keep people enslaved, is now "rebranding" their history to become a people who gave runaway slaves "refuge"!

These are all Confederate regiments who fought for the South in the Civil War. They fought in various battles and skirmishes, but clearly not to continue to offer "refuge" to runaways. In fact it is clear that many of the enslaved ran away from the Chickasaws to join the Union Army, and to fight for their freedom.


It is not clear when this was placed on the website of Chickasaw TV, but for those of us who today celebrate and honor the legacy of Dr. Martin Luther King Jr., to see this post on this holiday is more than disappointing. It dishonors the history and legacy of Dr. King, and it dishonors those whose ancestors were enslaved in Indian Territory.

This is clearly the first time, any website pertaining to the Chickasaw Nation made even a mention of slavery, but depicting the nation as a place where runaway slaves fled to and took refuge is a distortion and simply not true. But sure enough there on the  Chickasaw website is a fabricated story of runaways who found their way to Chickasaw country for refuge, as they fled bondage from white slave masters.

If the goal of the webmaster and the Chickasaw Nation is to present slaveholders and kinder and gentler than southern white slaveholders, the words of those once enslaved will refute that. Kiziah Love, a former Chickasaw slave interviewed in the 1930s as part of the slave narrative project spoke of many cruelties experienced by those enslaved around her.

"The slaves lived in log cabins scattered back of the house. He wasn't afraid they'd run off. The didn't know as much as the slaves in the states, I reckon. But Master Frank had a half-brother that was as mean as he was good. I believe he was the meanest man the sun ever shined on. His name was Buck Colbert an he claimed he was a patroller. He was sho' bad to whup Negroes. He'd stop a Negro and ask him if he had a pass and even if they did he'd read it and tell them they had stayed over time and he'd beat em most to death. He'd say they didn't have any business off the farm and to get back there and stay there."

One time he got mad at his baby's nurse because she couldn't git the baby to stop crying and he hit her on the head with some fire tongs and she died. He wife got sick and she sent for me to come a take care of her baby. I sho'd did't want to go and I begged so hard for them not to make me that they sent an older woman who had a baby of her own so she could nurse the baby if necessary.

In the night the baby woke up and got to crying and Master Buck called the woman and told her to git him quiet. She was sleepy and was sort of slow and this made Buck mad and he made her strip her clothes off to her waist and began to whip her. His wife tried to git him to quit and he told her he'd beat her iffen she didn't shut up. Sick as she was she slipped off and went to Master Frank's and woke him up and got him to go and make Buck quit whipping her. He had beat her so that she was cut up so bad she couldn't nurse her own baby anymore.

Her words are sobering and painful to read. And while  it is known that every slave holder was not prone to such violent acts of physical cruelty, but the very act of "ownership" of another human being in and of itself is the a cruelty. And to depict Chickasaw community before and after removal as a place of "refuge" is an effort distort history.
It is noted that everyone did not own slaves, and this is true for Chickasaws as well as others on the American continent. But to suggest that there was an anti-slavery, "come-to-me-my-brother" sentiment in an Indian nation that fought for the south in the Civil War, and that refused to grant their former slaves citizenship after freedom is simply wrong.

There is more honor in admitting to history, acknowledging that history,  and making the effort to know the people who later become Freedmen as well as to get to know those who descend from the enslaved. Truly that is the better way to tell the story. And it is essential that the descendants of the enslaved tell their stories and present their ancestors in the light of dignity that they deserve. The slaveholder descendants in the Chickasaw Nation do not need to "dress up" slavery. It can never be made a pretty part of history. The better gesture is  to acknowledge it, without "dressing it up"

Chickasaws owned slaves, as did many others in North America. But to paint and to distort one's own history as a place of refuge, clearly makes even current tribal policies of excluding descendants of those same slave completely even more incomprehensible.

The confederate Chickasaw Mounted Rifles in the Civil War were surely not fighting to bring in more people of African ancestry and give them refuge, and nothing could be further from the truth. The anti-black sentiments were strong and they prevail to this day. Chickasaw Freedmen are fully aware that they have, at present no possible way of applying for citizenship and having it granted----although their presence in Chickasaw country predates the days of removal, from Mississippi.

An Interesting Irony
There is an interesting irony however, that prevails today. Many descendants of Chickasaw Freedmen, and nearby Choctaw Freedmen, have relatives who are enrolled in the nations. As inter-racial marriages have occurred over the years, some have spouses, in fact who are enrolled Chickasaws, and even a well known politician from Oklahoma--a man of African Ancestry--is an enrolled Chickasaw. However, his enrollment comes from an ancestor on a blood roll, and not from one who was enslaved.

The current policy of several of the former slave-holding tribes, is clear---the blood of the slaves meant nothing, and ties of the descendants of those who were enslaved, means nothing today. This is no secret to Chickasaw Freedmen descendants. Their blood and their life meant nothing while slavery prevailed, and it means nothing now, although Freedmen descendants have a direct blood tie to those who labored and sustained the wealth of the Chickasaw slaveholders.

And sadly, to date, there has yet to be a voice spoken on behalf of Chickasaw Freedmen descendants or Choctaw Freedmen descendants from those of African ancestry who are enrolled in their nations. No one has yet to point out the travesty of the disenfranchisement of their kinsmen from within. And to see a statement, that somehow Chickasaw-held African slaves were given refuge--and to see the statement coming from a tribal-sanctioned site is disturbing.

On this day, honoring the legacy of Dr. Martin Luther King we can learn much from the words of this wise man, on this day. And perhaps someday on the soil of Tuskahoma to Tishomingo, as Dr. King said, that perhaps "the sons of former slaves and the sons of former slave owners will be able to sit together at the table of brotherhood."

If there is such a desire to extend an olive branch, the opportunity should be seized. 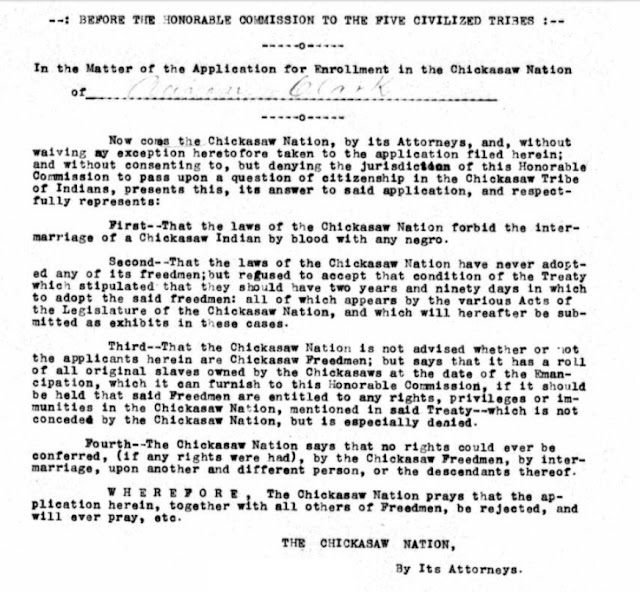 When the 1896 Roll was compiled, prior to the official Dawes enrollment process, there were many Chickasaw Freedmen who had begun to be interviewed.  Many were aware of their status as Freedmen, and were wishing to make sure that their status as having the blood of their fathers be acknowledged. Many appeared and went into great detail about their family background. They knew that they were "Negro" as stated in many of the records, but they also went into significant detail about their Chickasaw heritage, hoping that their possession of " Indian blood" would be recognized.

However, their possession of African blood was evident and was a point that the Chickasaw Nation chose to point out was the basis of their exclusion. In the case of Aaron Simon, who was applying as a Chickasaw citizen, the attorneys for the Chickasaw Nation replied and pointed out clearly that there was no place for people from the "Negro race" among their citizens by blood, even if the applicant contained the coveted "Indian blood." The response is seen clearly in this official statement by Chickasaw Nation attorneys that follows.

The first reason to reject all freedmen states clearly: "The laws of the Chickasaw Nation forbid the inter-marriage between a Chickasaw Indian by blood with any negro."

The letter points out that the nation refused to adopt the Freedmen according to the treaty, and that they were vehemently against this and because they refused to do so, once again, the Freedmen with Indian blood were not to be considered as Chickasaws by blood. In case after case, the applications made by Freedmen unfolded, until they were suddenly as a policy brought to an end. The result was that Freedmen applications were to simply be "summarized" as the concept of family units consisting of Indians and Freedmen was not to be tolerated within their nation. The applications of Freedmen seeking admission by blood contains useful data for historical as well as genealogical research. Hopefully many will start to look at these records.

These records are part of National Archives record group M1650