Madness Monday: Avoiding Those Myths in the Family Story 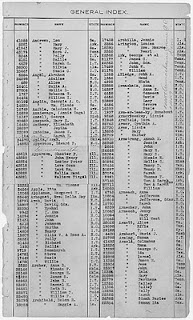 I often get emails from individuals asking for help in researching their families.  There are simliarities--there is the grandma with the hair so long that (fill in the blank) .  If you said "she could sit on it" you are right.

There are other stories of someone whose mother or father was "full blood Indian", but the name of the full blood Indian ancestor is somehow "forgotten" or "unknown".  The reason is usually because "grandma didn't talk much about her life."

There are descriptions "high cheekbones", to some other kinds of marks or characteristics said to "prove" that someone in the family was Indian.

And there is the often cited Blackfoot story.  Many in various parts of the country will claim ties to Blackfoot/Blackfeet and will mix them up with other tribes as well, such as Blackfoot-Cherokee, or vice versa.  BUT----as genealogists--your job is to document your family history. The stories are interesting, but none of them prove ties to any group of Native American people. Genealogy should be conducted in a sound thorough manner, and contrary to popular belief, there ARE records to document the history of American Indian communities.

Addressing those myths---
1) Hair length and hair texture are not proof of Indian ancestry. Many people in Europe, Asia and the Americas have long hair, straight hair. Genealogy is about documentaion of one's history, and not about hair texture.

2) The ancestor is "full blood".  Again this is a term oddly used to designate some kind of "degree" of Indian blood, which began in late 19th century political undertakings when collecting data on people from Indian communities.  The fact that a "full blood" ancestor is so often never known by name, might suggest that the descendants may wish to document the family using a more reliable method of research and genealogical citation.  Ancestor's names can be found and in many cases, the missing "full blood" parent is right there in the records, sharing the same race as the rest of the family.

3) Those high cheekbones.  There are no cases of "low cheekbones".  Prominent cheekbones are also visible in many people from Eastern African (Ethiopia, Somalia, Eritrea) who have no ties to native people in North or South America.

4) The Blackfoot factor.  This is often expressed by families from many parts of the country. Suggestion--learn the history of the place where your ancestors lived. The real names of indigenous people can be learned. To document your history--you need to know the history, of those who lived there. In the southeast US there are many Native American communities and many were captured in census records both 19th & 20th century.  There will be no Blackfoot/Blackfeet records found on records east of the Mississippi.  But if your family is tied to some of the many Indian communities they will be identified by the names by which they were known.  Call your ancestors what they were.

Now----WHERE can one find such records?

Here is a list of records that when your research takes you to the time period, you should employ them.

Confront those myths in your family history and conduct your research using sound genealogical methodology. Otherwise you will still be speaking about the Blackfoot grandmother with high cheekbones, sitting on her hair, and have no documents to illustrate this part of the history.

Avoid those myths in your family history, and document them the right way!
Posted by Angela Y. Walton-Raji at 8:33 AM

I am so glad to come across this site. I am one who has the great great grandmother who had the long hair, didn't talk much, but was considered Native American. I will definitely look further, particularly with my daughter's father's side. They have lots of information, but with documentation can prove so much! I am extremely appauled that ANY Native American would be racist or discriminating towards any one of African descent when just about every thing was stripped from them as well. Yet, they embrace practices from those who participated in the demise of their rich history!!! The earliest Native Americans are probably turning in their graves at the very thought of their descendants discriminating against ANYONE!