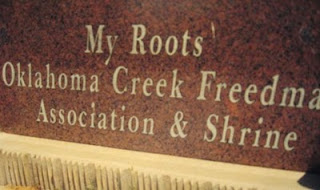 In 1993 I had the opportunity to visit a gentleman I had heard about in a Black History Video about the Freedmen of Indian Territory.  An elder gentleman, descendant of Creek Freedmen was interested in representing his history and his own family ties to the Muskogee Creek Freedmen.

His name was Napoleon Davis of Taft Oklahoma.  He lived on his property in Taft and had for many years wanted to created a shrine honoring his ancestors, the Creek Freedmen.  In 1990 Mr. Davis was interviewed by a Washington DC journalist, who is also a Cherokee Freedmen.  In that particular documentary, the history of the people enslaved in Indian Territory was featured.  The documentary ended with the words of Mr. Davis who was at that time constructing his shrine to the Creek Freedmen.  His goal, he stated was to honor them and thereby perhaps representing something that his ancestors may have wanted to say, but could not say.

Two years later, on a visit to Oklahoma, I gave a presentation at the Rudisill Library in Tulsa Oklahoma.  A woman was there, who lived in Checotah, and I mentioned that I had heard about the shrine being built, and she immediately pointed out that Mr. Davis was her cousin.  She offered to take me there, which I shall be forever grateful. A few days later, we met at her home in Checotah, and off we went to Taft, to visit the site.

Approaching his property across the fields one can see the structure. Not until one gets to the site, can one see the marble walls that announce what the structure actually is. 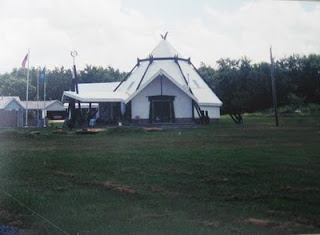 A round almost cone shaped roots stands in the middle of the property with flag at the entrance.  As the driveway goes to the front of the building the actual shape can be seen. 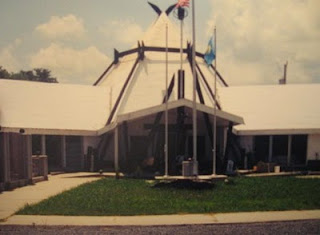 As I walked toward the entrance after parking the wall and the words enscribed on them were clear. 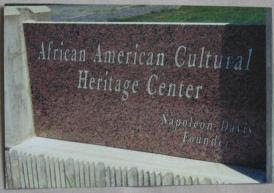 A another marbel panel bears the names of members of his family engraved in each star. 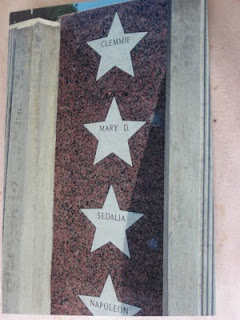 A large portion of the wall remained blank, which he later explained would be the formal name of the site after a dedication that he hoped to someday have with state political figures to attend. 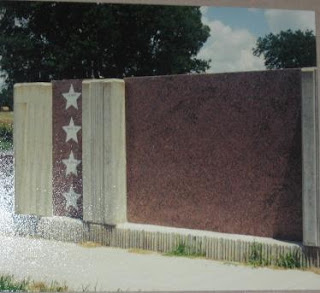 Mr. Davis greeted me in front of the shrine and graciously allowed me to take photos and explained the symbolism behind what he had done.  His goal was to honor the Creek Freedmen, and to honor them as African American people with strong ties to their land as Creek citizens.  He had a very strong feeling about the images that many persons of African Ancestry had, and how they are often depicted and perceived, and he wanted very much to have the site dedicated as an African American site.
The most remarkable aspect about the facility was the inside.  He wanted to honor the ancestors, and honoring them, he did!
On the inside, for what greeted any visitor to the sites were the names---several thousands names---of his ancestors and the people with whom his ancestors identified.  The Creek Freedmen.  The names of all of them were on the wall, on more than 120 laminated plaques and afixed to the wall of the site.  Thousands of
names of Creek Freedmen that were on the Final Dawes Rolls.  The pages were names that appeared on Campbell's Abstract. 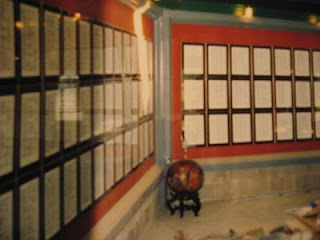 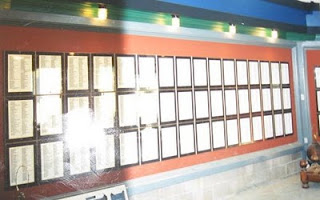 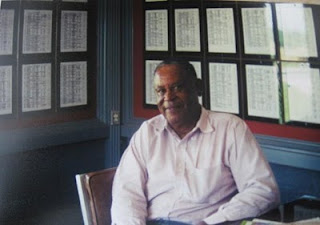 I visited him again in 1994, and he was still hoping to launch an opening, but had not been supported by many in the local area.   Unfortunately, Mr. Napoleon Davis passed away from complications during a surgical procedure.  It has been now about 10 years since his death.  Though spoken about frequently, it is not known if there has been any activity expressed to continue what was begun by Mr. Davis, or to preserve what he built.
The Shrine is located on the Davis estate in Taft Oklahoma.  Hopefully what was built will not fall into ruin.
Posted by Angela Y. Walton-Raji at 5:21 PM

Angela, thanks for bringing this remarkable man's story to the public. I recall seeing photos of the shrine long ago when a member of my local genealogy society member visited the site in the 90's

I really didn't get a sense of the amount of work and dedication this man put into that glorious building and correct me if I'm wrong, didn't he do most of the work by himself?

You will recall some years ago after Mr. Davis' death his children were trying to sell the property and the building, do you know if they were successful in doing so? I truly can't understand why other Creek freedmen never came to this Mr. Davis' aid and supported what he put together it would be tragic if this building has fallen victim to nature and disrepair, truly tragic.

I know for a lot of people being recognized as a citizen of an Indian tribe is paramount but at what cost to forgetting about preserving your true history as Mr. Davis' example demonstrates.

He was but one man, and there are hundreds if not thousands who could do much more.

Yes, you are correct. Mr. Davis did most of the work himself. And he also oversaw the production of the hundreds of pages of Creek Freedmen Names and had each one lacqured onto beautiful wooden plaques. This alone was an expense in addition to the work on the structure itself.

His is an example to all of us, and a poignant reminder to preserve history---the one thing that cannot be refuted, or voted out of existance, nor legislated out. The only danger is neglect and lack of interest in preservation.

Unfortunately the outside and inside structure of the shrine is in bad shape, but the marble and stones are in good condition. There are a few plaques that list the roll numbers of the freedmen out side the shrine which is weather beaten and worn. It was heartbreaking to see the remnants of the Shrine scattered on the grounds. However, the outside marble and stones are in good condition. There are a couple of photo's hanging on the wall. According to the realtor an elderly lady purchased the property and planned to renovate it into a home(she really butchered the shrine). One of the persons that visited the Shrine with me purchase a few of the items at the estate sell a few years ago. Again it is a shame that the Descendants (I include myself) missed this opportunity, and the truth is I didn't know it existed until recent year. I truly regret that I did not meet Mr. Davis and visit the Shrine when it was up and running. He truly was a remarkable man!

This is truly heartbreaking and I recall trying to get individuals interested in this site for several years.

I visited it twice and I know he needed some people in Oklahoma to work with him. He waited so very patiently, and hoped that a little publicity would bring them to his site.

He was interviewed while building it, and I interviewed him for an edition of the journal Frontier Freedman's Journal. I revisted him, two years later, and his hope was to expand the small Creek Freedman's association that he formed.

I recall a few years ago on the message board mentioning it, but no one responded and spoke with the family when they were hoping to sell it to persons interested in preserving history.

To think of those beautiful lacquered plaques now trashed on the ground and weather worn is sobering and a travesty.

Thanks for sharing this update. I am glad that I have some of the few photos that exist reflecting the work of Mr. Napoleon Davis.

May he rest in peace, though his spirit might not rest till, this site is restored.

Hello Angela Y. Walton-Raji, this is Andre Head with the Coltrane Group. Im listening to a radio show and there talking about the Tee-Pee. Can you tell me about this?

I was just told on last night that Mr. Davis is a relative of mine. This is very disheartening to hear that no one kept his work. I can only imagine the amount of time, effort and money that went into his research. As a keeper of our family tree, I'm highly disgusted that no one held onto any of his information, it would be of so much value to so many in the family today as well as others who are trying to find their roots.