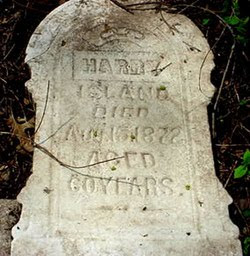 Another grave marker lying flat on the ground.

Harry Island was the noted Muscogee Creek leader who is buried in the neglected and ignored Old Agency Cemetery. Someday, hopefully descendants from this community will address this historic burial ground.

Harry Island served as one of the official U.S. Interpreters with the Muskogee Creek Nation. He was present during many official hearings during the 1860s and 70s in the years following the Civil War.

Harry Island was utilized most often by the nation, because of his fluency in both English and Muskogee. He had other African contemporaries who were also interpreters---Silas Jefferson, Robert Johnson, and John Meyers. During the hearings for the Loyal Creek Claims, Harry Island served as government interpreter for Louisa Tiger and others, who were refugees from the War, from the Muskogee Nation.
Posted by Angela Y. Walton-Raji at 11:07 AM

Congratulations – I am giving you the ANCESTOR APPROVED AWARD! Keep up the good work; I enjoy reading your blog. Follow the guidelines on my post to accept:
http://familyforestblog.info/?page_id=470