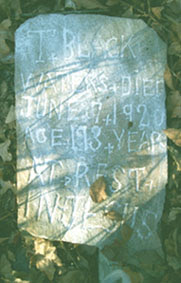 This is the headstone of Thomas Blackwater a Choctaw Freedman. (Choctaw Fr. Card #1469) *

* Note, the image of Thomas Blackwater was photographed by Tonia Holleman when she and Verdie Triplett visited the Brazil Cemetery.  The ownership of the image taken by Ms Holleman, was previously omitted and I regret this omission. (October 11, 2010)

Born in the Choctaw Nation, this Blackwater managed to escape from his Choctaw slaveholder and made it into Arkansas where he eventually joined the Union Army to fight for his freedom.  He lived in Brazil in Skullyville County and is buried in the old Brazil Cemetery. His stone was pushed over and lying flat on the ground. By working with the local veteran's organization, it is hoped that a proper military stone will be placed in the cemetery where his body is buried.
Posted by Angela Y. Walton-Raji at 12:09 PM