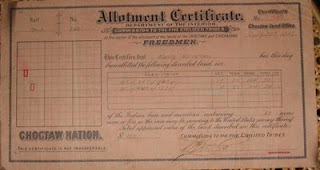 Chickasaw Freedman Allotment Certificate
Many are not aware that the Dawes Enrollment process was created for the purposes of redistributing land within the five tribes, in personal allotments, so that remaining lands would be free for settlement by the new state of Oklahoma.

All five nations participated in the process and all whether, categorized as citizens by Blood, Freedmen, or Inter-married whites---all received land.

Upon allocation of the personal allotments, certificates were issued, and one does occasionally see land allotment certificates for Freedmen.  I have three Freedmen allotment certificates in my own possession, in addition to others that I have found occasionally, and am displaying one of them here.  Many families lost lands in the years following statehood, some through taxes and many others lost the land through land grafters who were notorious in obtaining land from hundreds of people.

In the Choctaw Nation, if you were a Freedman citizen, 40 acres were given to each, but if one was a citizen by blood a typical land allotment consisted of 60 acres or more.  This kind of discriminiation continued towards black citizens, for several decades in the new state of Oklahoma. Descendants of those who were Freedmen were quietly expelled when the tribe reorganized and removed the Freedmen when reorganization of the tribes took place in the late 1970s nad early 1980s.  This expulsion of Freedmen continues to this day. And although they eventually received land allotments the Chickasaw Nation continously denied rights and priveleges of citizenship to their Freedmen for 40 years. 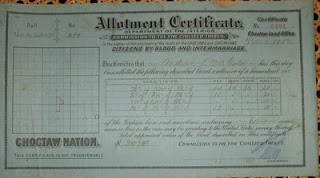 So what are they doing with the freemens land alotments