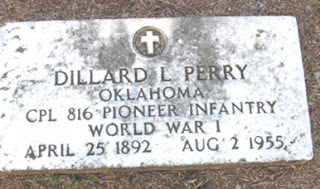 Dillard Perry was a Chickasaw Freedman by blood. He is the brother to Joe Perry and they were part of the famous "Joe & Dillard Perry Case."

Their father was Chickasaw and their mother was a Choctaw Freedwomen. Their Freedman grandmother originally enrolled them as Freedmen and their mother sued for their right to be enrolled as Chickasaw by blood. Their Chickasaw grandmother completely rejected them, (as did his other siblings), and they never had anything to do with these children, even admitting to her open disdain for them, as being the children of her son's Negro wife.

Their case became a landmark case that in fact had issues taken as far as Congress to deliberate their case. They won the right to be enrolled on the Chickasaw Rolls by blood, but as time passed over their years they were put on and off and on and then off the rolls again as citizens by blood, although these two young men were clearly half Chickasaw. If they won a hearing the tribe would appeal and they would be removed. They would appeal and would win the right to be on the roll again, but then the tribe would once again appeal and they would be removed.

Their case became the landmark case that also exemplified the strong biases against African-Chickasaws from their own nation. Dillard Perry is on the rolls on Chickasaw Freedmen Card Number 61, with a roll number#268.

In spite of this Chickasaw by blood and his history and the case that they won----the nation still keeps the descendants of their slaves at distance, sharing a similar fate as those who descend from the 4 other slave-holding tribes.

May he and their descendants never be forgotten.
Posted by Angela Y. Walton-Raji at 10:53 AM

Hello, I'm from a Choctaw family and kind of stuck in my genealogy. I'm trying to figure out how far it goes back. Have an good websites? I hope to hear from you soon.

There are many resources for descendants of Choctaw and Choctaw Freedmen. My main website www.african-nativeamerican.com should provide the right links to get started. If you need some specific links or suggestions, email me at AngelaW859@aol.com