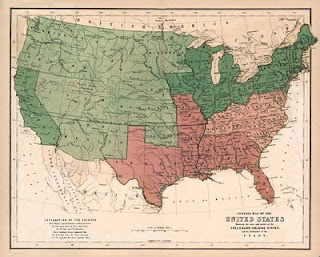 But the ommission of slavery in Indian Territory, omits the stories of slaves, rebellions, runaways, and abolition.  And the ommission of slavery is an affront to those who descend from those who were enslaved.
The black slaves brought to Indian Territory as slaves---not brothers, friends, protected allies----they were slaves--they were bound, entrapped, human chattel, taken to Indian Territory as slaves of wealthy slave owning Indians---not often depicted when the stories of the Trail of Tears or Indian removal are known.

But this is part of my history.  And it, like all stories deserves to be told.

To understand  the story of 1200 slaves taken to Indian Territory, will help other understand the plight of Cherokee Freedmen today.

To understand the involvement of 5 slave holding tribes and their support of the Southern Confederacy and their fighting with the South, will help others to understand why many will fight tooth and nail to keep evidence of slavery in their tribes today.

To understand the resistance that slaves made to try run to Freedom, will help others to understand why the 5 slaveholding drives just took a vote to get rid of the descendants of those slaves today. 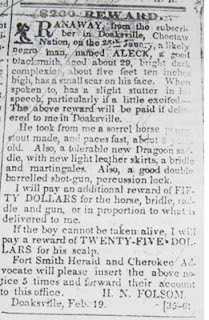 To understand that some would rather see their slaves dead than free, will help others to understand the resistance within the tribes today to acknowledged this part of their past.

To understand the fact that slaves were not freed after the Civil War, helps others to understand why some claim that the Treaty of 1866 was forced upon them.  It was--- for it made them officially release their slaves from bondage!

To understand the struggles of Chickasaw Freedmen to get their nation to honor their signature to accord them citizenship, makes it easier to understand why those few black Chickasaws in the nation today receive hostile glares in Tishomingo today.

To understand how many African Creeks were active in tribal politics in the years after the Civil War, confuses those noting today how the Muscogee Creek Nation, also forbids Freedmen descendants in their tribe today.

To understand the politics of race---will help others understand, how Indian Freedmen were at one time citizens, and now, because they don't have the race of the people who enslaved them, are erased from the nation of their ancestors's birth and are now shielded by a protective blanket of sovereignty shielding the slave owner's children  from federal scruitinty.

Hello,
Thought I would leave an excerpt from an article relevant to your topic.
““Article: The paradox of freedom: tribal sovereignty and emancipation during the reconstruction of Indian territory. (Native American slaveowners )
Article from:
The Journal of Southern History
Article date:
February 1, 2004
Author: Saunt, Claudio Copyright

…The Reconstruction government imposed civil and political rights for blacks on the Five Tribes as part of a larger project to assert the supremacy of the national state and to enlarge federal citizenship at the expense of relationships between slaves and masters, citizens and states, and Indians and indigenous governments. (24)
http://www.highbeam.com/doc/1G1-113898347.html