This enrollment card from the Dawes Commission of Thomas Blackwater, shows that he was not only a person who had been enslaved in the Choctaw Nation, but that he was among many who resisted.  Even his enrollment card notes that he enrolled in the Union Army as a soldier.  The details in his pension file told even more about his escape from his Choctaw enslavers into Arkansas and enlisted when Federal forces arrived in nearby Ft. Smith. 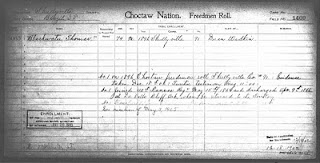 The small notation on his card reveals an interesting detail pointing the careful researcher to obtain not just his Dawes Card & Dawes enrollment interview, but also his Civil War Pension file.

(This is the same Thomas Blackwater, whose headstone was featured recently.)

There were many man who were enslaved in Indian Territory in the Five slave-holding tribes, and the records about their service in the Union Army, and about their lives in the Territory can be explored in depth by pursuing their military history.  In many cases, rich family data can be located in the wonderful pension files of Union Army veterans. Military service records of the United States Colored Troops have been microfilmed and the military pension files are at the National Archives, and must be obtained from the National Archives in Washington DC directly.

(Assistance in obtaining pension files can be obtained by writing to AngelaW859@aol.com.)
Posted by Angela Y. Walton-Raji at 6:31 PM