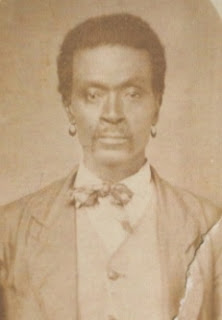 One cannot present a profile of Seminole families without mention of the name, Caesar Bruner. He was the leader of the Bruner band--the band chief in fact. And, in addition, his legacy is one that continues to this day. Bruner is also one of the few leaders from Indian Territory for whom there is also a photo image of him that survives.

At the time of the Dawes Commission, Ceasar was already an old man, who had arrived with the contingent of Seminoles from Florida. He like Abraham and others lived among the maroons, and later with the Indians who later arrived in the Territory after the Seminole wars. Bruner, like another compatriot, Dosar Barkus ended up being not only a band leader, but also spoke on behalf of many Freedmen who appeared in front of the Dawes Commission in the 1890s and early 1900s. His word was accepted when he spoke on their behalf.

Little is written however, about Bruner's own family history and it is seldom mentioned. in particular his own parents and siblings if they are known. As a result I decided to give a brief overview about his life.


From The Dawes Card

Caesar Bruner lived his life before the Civil War as a free man. He was the son of parents from Alabama and Florida, who came to the Territory during the years of removal. Having been born and having lived among Seminoles as well as Creeks Bruner spoke the language of both the native people as well as English.

His parents at one time were said to have been enslaved, although that can be disputed to a great degree as well. However, the status given to him on the Dawes Card is interesting. This man, a leader in the tribe, a free man, never enslaved, was still put recorded as a "Freedman". So his placement as a "freedman" is seemingly incorrect, because he was not "freed" from bondage, having not been enslaved. His name was recorded on Seminole Freedman card, #740, Field #133.On his card in fact in the column reflecting the name of the slave holder, it is clearly written that he was a free man. 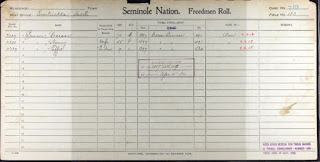 
His parents were said to have been William Bruner and Affie Bruner. According to the information on the Dawes card, they had once been enslaved by Tom Bruner a Seminole.

Ben Bruner was part of the Bruner clan and like Caesar, was he too born free. And at the time of the Dawes enrollment, he lived in the same community as Caesar. 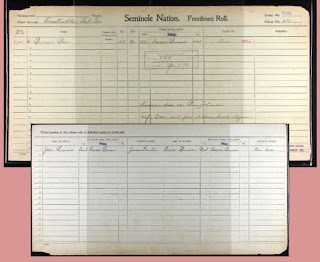 In the interview with the Pioneer project, he spoke of his own father John, and when they came to Indian Territory. His interview also reflects a more intimate relationship between Seminoles enslaved and free, and of the contact between those who were enslaved and those who were identified as full Seminoles. In addition, the relationship between Seminoles and Creeks is also noted in this excerpt from his interview. And in that interview he mentions his father John's siblings by name. 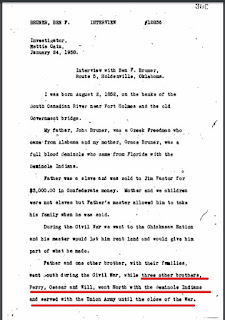 From this excerpt we learn that Ben's father John, and had siblings who were Perry, Caesar and Will. Clearly Caesar is among them. It also has to be pointed out that the brother "Perry" he mentions is actually Paro Bruner, often called Perry even some by Bruner descendants today.

But note---Paro Bruner was actually enrolled as a Creek and he was the very first Creek Freedmen to enroll on Census Card #1. Also he is another Freedman leader for whom a rare photo image actually exists as well. When examining the card for Paro Bruner---it is clear that he and Caesar Bruner were siblings--same father and the same mother. His parents were William Bruner and Affie Bruner--the same two people who were the parents of Caesar Bruner. 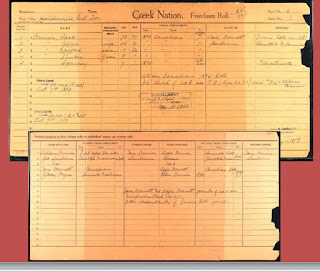 Enrollment Card for Paro Bruner front and back
Creek Freedman Card #1
(Source: Same as for  census card images above)

The interview with Ben Bruner also left another significant clue about Caesar Bruner. He mentioned that Caesar along with Perry and Will left Indian Territory,and went north (meaning into Kansas) during the Civil War. I checked to see if Caesar served in the military in the Union Army. What a surprise that to see that he did not serve in the military as a soldier, but worked for the military as an official interpreter. 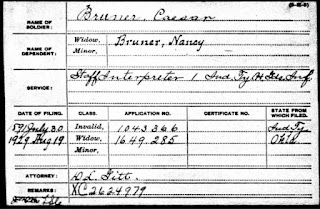 
He filed for a pension later in life, but was not awarded the pension, however, the record shows that he applied for his service having been an interpreter. After his death his wife Nancy also applied, but she too was later denied a widow's pension. And a second card reflects the brother William, who was a soldier. He enlisted in the 1st Kansas Colored Infantry. That unit was later re-designated as the 79th US Colored Infantry. In his own case, he applied for a pension and received it. 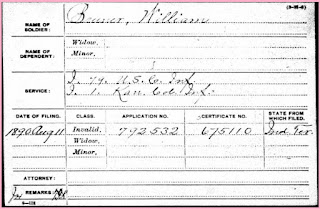 Usually the Dawes Commission records contain an application jacket that corresponds with the enrollment card. However, similar to that of the Creeks many of the Seminole files are empty. The jackets exist, but they are clearly marked empty and unfortunately in the case of this band leader, his file was also empty. Although he was interviewed many times when other Freedmen members of his band applied, his file was an empty one years later. 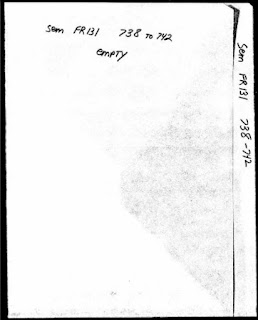 It is difficult to imagine how the words of a tribal leader would be lost, but some of his words were preserved in the interview when he appeared to select his land allotment. 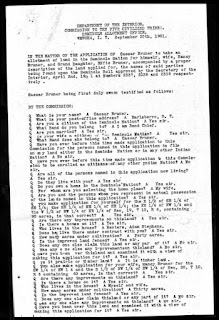 
The National Archives at Fort Worth, Texas. 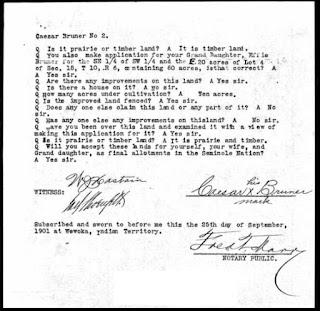 (Source: same a above)

And sure enough each member of his immediate family was able to select their small 40 acre parcels of land, each. On this particular document one can see Caesar's name along with wife Nancy, and granddaughter Effie on this land record. Although they received only 40 acres each, it should also be pointed out that Bruner had other adult children as well. However, it does appear that in some other cases from other bands that Seminoles identified as "by blood" their acreage was larger. How extensive that pattern was is not known. But the large Bruner clan did occupy much land after the process ended. 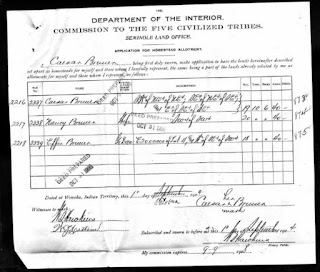 (Source: Same as above)
It is well known that the large extended family of Bruners settled in the lands around Turkey Creek. An older settlement area known as Brunertown was the area where this large clan of Seminoles lived for many years and then after the allotment process ended they lived around Turkey Creek. He died in 1923 and is buried at Mt. Zion Cemetery in Seminole County Oklahoma. His descendants live around the country. 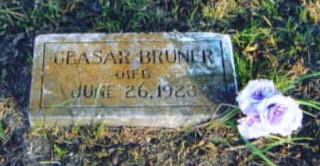 The legacy of Caesar Bruner is an interesting one, going back to his own family in the Seminole Nation, in Florida, and also part of Alabama. By following the footprints that he left in the records, his journey was massive. His parents and siblings all survived the Seminole wars, and began a new life with family in Indian Territory. He was a leader to his community and was a major patriarch to his family and clan.

As one who spoke the Muscogee language of the area, and served the Union army as an interpreter, and was able to move comfortably among both Seminole and Creek communities. His brother Paro Bruner was a leader among Creek Freedmen while Caesar himself became band chief of the Bruner band. His life spanned a good portion of the 19th century during a period of disenfranchisement and hardship, and extended into the early years of the 20th century. He lived to see the world change, to make a difference, and because of him an amazing legacy remains.

This is the 40th article in a 52-article series devoted to sharing histories of families once held as enslaved people in Indian Territory, now known as Oklahoma. The focus is on the Freedmen of the Five Civilized Tribes, and these posts are part of an ongoing project to document 52 families in 52 weeks.
Posted by Angela Y. Walton-Raji at 3:41 PM

These stories are so interesting. Turning my vague knowledge into actual persons.

I wonder if there is a skipped generation. Specifically, I am wondering if Caesar and Paro are the children of William, and another Caesar, Perry/Paro, John were Uncles?

Does anyone know who his in- laws were?