Though little is known of his early life, Dosar Barkus emerged as one of the leaders in the Black Seminole community of Indian Territory in the late 1890s. Living in the town of Sasakwa at the time, Dosar Barkus appeared in front of the Dawes Commission. The purpose was to enroll himself, wife Sookie, sons Daniel and Sango, daughters Amy and Dolly, and youngest son Jackson, all to be enrolled as Freedmen. He at at one time been enslaved by John Jumper. 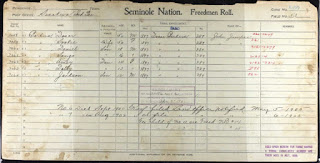 His father was Joseph Barkus and his mother was Nancy Barkus, and both had been enslaved also by John Jumper. Sookie's father was Nicholas Patterson, and her mother was Katie Payne. All had been members of the same band. 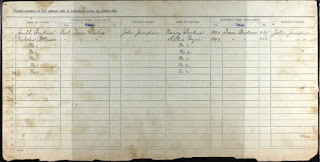 (Source: Same as above

Sookie's mother was Katie Payne and she was still alive at the time of the Dawes Commission and she also had an enrollment card. On Seminole Freedman card #55 her name is recorded along with the name of her granddaughter Bessie Dosar. She was at that time 70 years old. She like many other Seminoles had come to the Territory after the Seminole wars, and was originally from Florida. 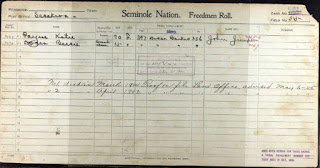 Bessie was the child of Dosar Barkus and another mother known simply as "Tena" who was by that time, deceased. 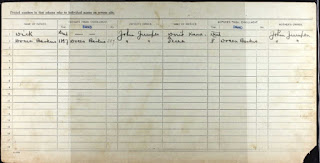 Upon closer inspection, Dosar's mother Nancy was also still living. They were among some of the oldest Seminole Freedmen still living. Nancy Barkus also lived in Sasakwa. She had been enslaved by Seminole Mos-ca-diet-chee. Her father and mother were Dick and Tena. Living with her was an adult daughter Mary, the daughter of both Nancy and Joseph Barkus. With Mary having the same parents, as Dosar, clearly they were siblings. 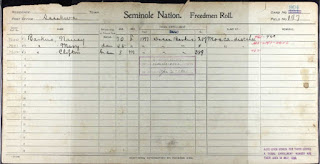 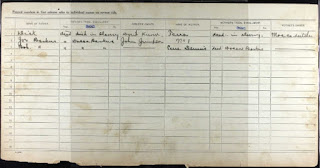 
During the Dawes commission era, and after taking leadership of the Noble Freedman band, Dosar Barkus became a spokesperson for many of the African Seminoles going through the Dawes admissions process. By the time of the Dawes hearings he was a man of 50 years, and one who had a strong constituency in the Seminole nation.  This constituency would later depend upon him to get them through the Dawes Commission hearings. He witnessed more than 50 interviews for the Dawes Commission and he was part of their final interview process, vouching for the character and reliability of the data provided, for the Commission.  It is clear by this respect accorded him at the hearings that his word was to be listened to and followed.

Dosar Barkus, alongside the other African Seminole band leader Caesar Bruner, both became leaders with a very strong level of influence with lasting legacy. The two African bands in the Seminole nation today carry have their names after 100 years. Barkus resided in a largely black settlement in Sasakwa, Indian Territory with his wife, Sookie, and their children Daniel, Sango, Amey, Dolley , and Jackson.

Land Allotment RecordsBarkus went through the land allotment process without difficulty and nothing was contested by anyone regarding his land. Thankfully the one interview with Dosar Barkus is found with the allotment jackets. 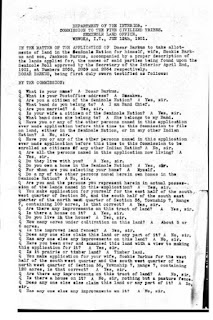 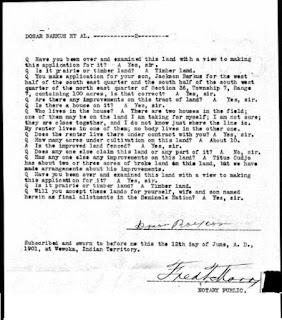 The Dosar Barkus band is active to this day and there is even a presence of the band that is found on social media with small descriptions of their history, whose origins begin with William Noble who led the band from 1870 to 1898. At that time Dosar Barkus took over the leadership and the band flourishes well into the 21st century.

The Seminole Freedmen in recent years have had their challenges and had to take legal actions to insure their continued status in the nation. They won partially, although still struggle for equal treatment by the nation that is their birthright. Clearly through men like Caesar Bruner and Dosar Barkus the legacy of the Seminole Maroons, live through members of both bands. Their history is one to study, honor and celebrate. The Barkus descendants are numerous and the history of their band leader, will forever be a part of Seminole history.


This is the 45th  article in a 52-article series devoted to sharing histories of families once held as enslaved people in Indian Territory, now known as Oklahoma. The focus is on the Freedmen of the Five Civilized Tribes, and these posts are part of an ongoing project to document 52 families in 52 weeks.
Posted by Angela Y. Walton-Raji at 11:11 PM