As challenging as it is to research families from the Creek Nation, it is still worthwhile to explore the records and families presented as part of the Dawes records. One of the many lessons when studying records from Indian Territory is how many people from one nation lived in another part of the Territory, and with Creek Freedmen such was also the case.

With Creeks one will always see a reference to "tribal towns" which in many cases did not reflect where they lived. One "belonged" to a town while living in another nation's jurisdiction geographically. The case of Minnie Allen is a such a case. In this case Minnie Allen was a Creek belonging to North Fork Town, but resided in Stonewall, in another nation entirely.

Minnie Grayson Allen resided in the heart of the Chickasaw Nation. She was only 21 years of age, and was a member of North Fork Town. Her name had previously been mentioned on the Dunn Roll, the 1890 Roll and the 1895 Roll. At that time on the much earlier Dunn Roll her name was listed as Minnie Grayson. 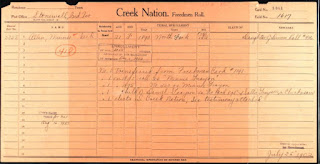 On the reverse side of the card, the names of her parents are found. Her father was Daniel Grayson, and her mother's name was Sallie Grayson. Her father Daniel was also a member of North Fork Town. He had at one time been enslaved by Robert Grayson. Her mother Sallie, though deceased at the time, was said to have been Chickasaw Freedman. 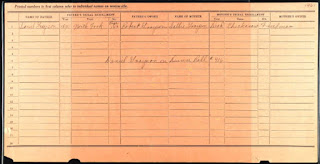 Minnie and Siblings
Because of the Chickasaw Status of the mother, I decided to look for a possible tie to Chickasaw Freedmen. In addition, the fact that Minnie resided in Stonewall, I felt a need to look. Surprisingly, Minnie's family was located on a "cancelled" Chickasaw Freedmen card.

Sure enough, right there in Stonewall was a card reflecting Minnie and all of her siblings on the card. They were all siblings on the card--Mary, Minnie, Curtis, Hattie, Pearl, and Mary's six month old child Wallace Frazier. All were on Chickasaw Freedman Field Card, #67 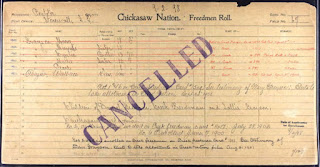 Upon close examination, it is clear why this card was cancelled, as all of the people whose names are inscribed on the front of the card were actually transferred to Creek Cards.  Notes on the bottom of the card as well as written on the right side of the card, in red, highlight the final outcome and the specific cards in the Creek Nation where they were later enrolled.

(Close Up of notes on front of card

On the back side of the card, it is clear that the are all children of Daniel and Sallie Grayson. Also on this card it is revealed that Sallie Grayson had also been enslaved at one time by Winchester Colbert. 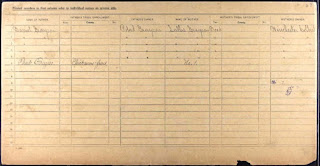 One small note on the bottom of the front side was also revealing, for it noted that there was a testimony made by Daniel Grayson. That suggested that Daniel Grayson the father was still living as I  had suspected. I then took a look again at the Creek cards, and sure enough, the children listed with Minnie on the cancelled Chickasaw card, Hattie, Curtis and Pearl, were found on a Creek Freedman card, listed with their father Daniel, on Creek Freedman Card #873, Field Card #893.

Another generation found
On the back side of Daniel Grayson's card, were the names of his parents. March Grayson, and Rachel Grayon, of North Fork Town. It was noted that Rachel's name had appeared on the Dunn Roll. Again, noting that Rachel was not said to have been deceased, I examined the Creek Freedmen cards again, and to my surprise, I saw an elderly woman of 75 years living. I cannot determine whether or not she is the right Rachel. (That particular Rachel was living in the Brush Hill community which is near Checotah. And she was enrolled on Creek Freedman card, #831, Field #851. Listed with her were grandchildren and a great granddaughter.

Rachel was a member of North Fork Town. Her slave holder was at one time, Jno (John) Hogeneat(?). The mother of the children was Lizzie Grayson from North Fork Town, and Lizzie had once been enslaved by Robert Grayson, the same person who had enslaved others in this particular Grayson line. 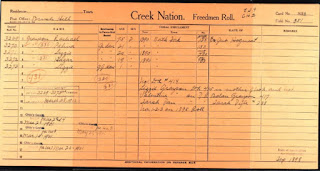 Both of Rachel's parents were long deceased, her father Jerry having died before the Civil War. Her mother Angeline, died in Mississippi. 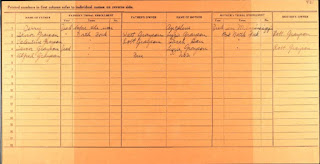 From the Land Allotment jacket the "voice" of Minnie Allen can be found. She had lived for many years in the Chickasaw Nation, but her application was that of an applicant to the Creek Nation. It was noted that her mother Sallie was a Chickasaw citizen, but clearly her father was a Creek, and had belonged to North Fork. She was not certain of her father's status as a Creek, but upon examination her father's name as well as her own name was found upon the members of North Fork Town. 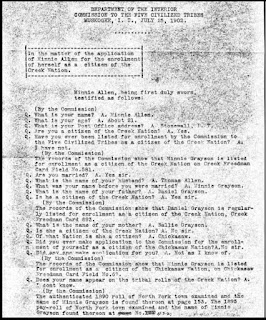 She was asked about her knowledge of the Curtis Act and what tribe specifically was she electing to enroll and receive land allotment. She clearly stated that she was electing to be enrolled as one from the Creek Nation. 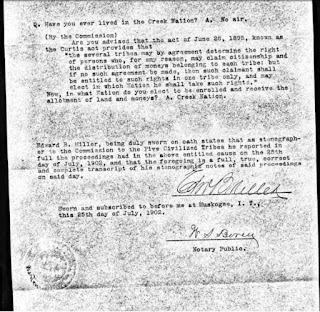 Other documents appear in the file, including papers reflecting their clarification of the status of her mother Sallie Grayson who was deceased, and of the Chickasaw Nation. 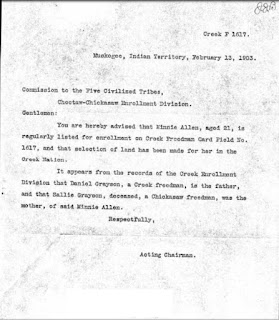 However, other items in the file reflect that Minnie and the others did get to select their allotments. From a simple file reflecting a young woman, the history of a family going back multiple generations was found. Hopefully some remnants of their legacy remain upon the soil of the Creek Nation where their history is strongly rooted. 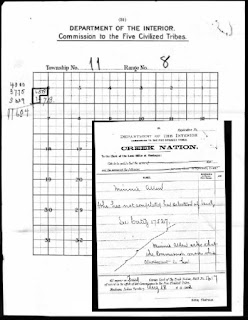 (Source of the two documents: Same as above)

This is the 38th article in a 52-article series devoted to sharing histories of families once held as enslaved people in Indian Territory, now known as Oklahoma. The focus is on the Freedmen of the Five Civilized Tribes, and these posts are part of an ongoing project to document 52 families in 52 weeks.