From Pontotoc County in the Chickasaw Nation, comes a very interesting family, and the family history of of Samuel Chawanochubby is one that reflects the complexity of life in Indian Territory. His father was a Chickasaw Indian known by many as simply as Chawanochubby. His mother Lena, was enslaved by Chawanochubby. But the relationship between the man and the woman who bore his son went beyond that of master/slaves. They had an ongoing relationship, and they were perceived by those who knew them to be husband and wife.

The two cards are shown below, one on top of the other as there is only one name on the front. The front of Samuel's card clearly shows that he was born enslaved and the name of his slave holder is reflected as Chawanochubby. The second side of the card (see second card below) clearly illustrates that the slave holder and the father of Samuel were indeed the same man. Chawanochubby was his father. 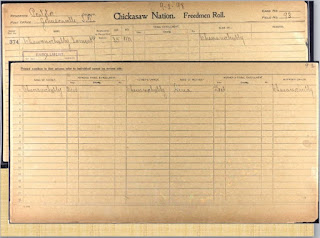 Close up of front of card

Close up of back side

When examining the application jacket one can learn so much more about the historical context and circumstance in which Samuel, the applicant lived. First of all Samuel lived as a Chickasaw, and was considered to be Chickasaw by those who knew him. There were witnesses who spoke on his behalf and those witnesses verified that he was raised by both his father and his mother together and that his parents were considered to be a married couple. There were other siblings, and they were all raised in the same household as Chickasaws. 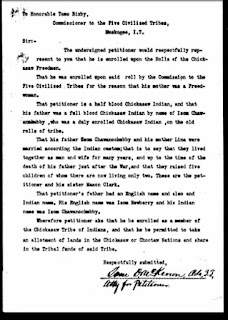 Samuel had a sister who was still living and she too was applying for enrollment. She spoke only Chickasaw and required the assistance of a translator to assist her. She told her story and it was interpreted as part of the record. 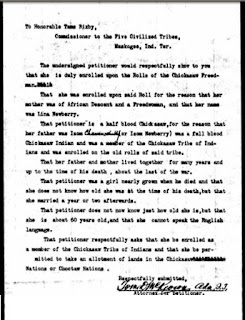 The interpreter was Munroe Clark who was fully bilingual in both English and Chickasaw. 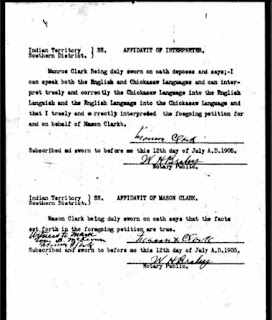 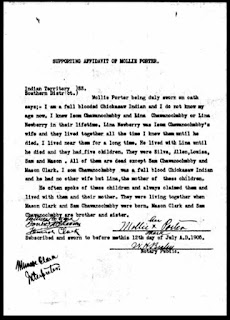 The basic request was that Samuel wished to be placed on the blood roll as the son of his father, a Chickasaw Indian. However, the request for both Samuel and his sister was denied. The reasoning was that they were slaves, since their mother was a slave. Of course their status at birth was not of their own control, but the decision to punish people for being born into bondage began and is a policy that continues to this day. The file was quickly closed after the decision to deny was made. 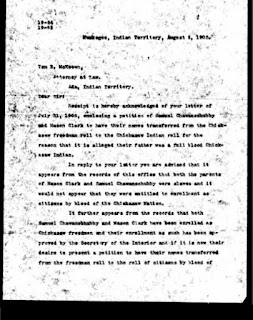 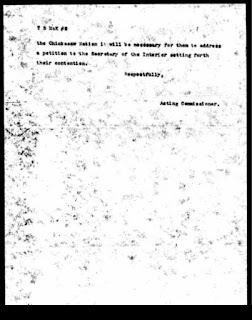 In spite of  the blood and the cultural ties to their nation, and even the need for interpreters for sister Mason Clark, they were placed on the Freedmen roll. The record however speaks to an amazing richness in their history. The file itself reflects relationships that developed between people, even in spite of the legal and cultural demands of a hostile south, a hostile slave holding Indian tribe, and the larger community from the nearby United States.

Descendants of Mason Clark and Samuel Chawanochubby have clear documentation of their ties, and direct lineage to their nation of Chickasaw people, by culture, by langage and by blood. They were and they are Chickasaws.

From this story of Samuel Chawanochubby that argument against African-Chickasaw ancestored people, this man and his story is simple. He was a man who was clearly tied to the tribe through his father's blood, through his mother's toil and her blood and through his own tie to the land and soil upon which he lived his life. He was Chickasaw.

This is the 48th article in a 52-article series devoted to sharing histories of families once held as enslaved people in Indian Territory, now known as Oklahoma. The focus is on the Freedmen of the Five Civilized Tribes, and these posts are part of an ongoing project to document 52 families in 52 weeks
Posted by Angela Y. Walton-Raji at 10:58 PM