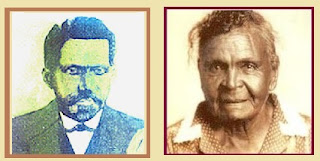 No Oklahoma Freedman project would be complete without telling the story of my own family from the Choctaw Nation. The face above is that of Sallie Walton, my great grandmother. She was the face that I saw throughout my childhood, and a face that represents, love, sweetness, and wisdom. She was the face I saw every afternoon, and it was her bed into which I fell for my afternoon naps, until I started school.

Her ties to the Choctaw Nation were nothing new--it was often spoken of. It is also from studying her history, that I learned the history of thousands of others from the same place--Indian Territory. Sallie was born in the Choctaw Nation, in Indian Territory about 1863, right in the middle of the Civil War. I would not realize however, until 1991 that the face that I had always loved was the face of one who was born enslaved. She was a small child when freedom came and having been born enslaved that would place her and her children on the roll of "Freedmen" from the Choctaw Nation.

Sallie married Samuel Walton, and they both appeared in front of the Dawes Commission in 1898 to apply as Choctaw Freedmen. On the card, were my great grandparents, Samuel and Sallie, my grandfather Sam Jr., my uncle Houston and my aunt Louisa Ingram. They all lived in the Skullyville area of the Nation.

On the far right it is noted that Samuel's slave holder was a man called Jim Davis. For Sallie it was noted that she was enslaved by Emeline Perry. 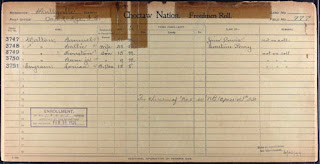 
Additional information on the back appears on the enrollment card. Samuel's father was listed as Pat "Drenard" and his mother as Lydia Walters. Sallie's father was listed as Eastman Williams, and her mother was Amanda Perry. In the column next to her father's name is a notation that he was not enslaved or "owned" but in fact he was a Choctaw Indian. Sallie's mother had been enslaved and it was noted once again that the slave holder was Emeline Perry. 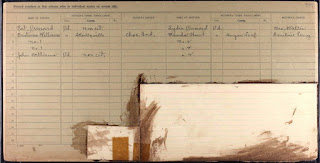 Thankfully, the application jacket contained full testimony of the Waltons during the Dawes process. Samuel first was interviewed and additional information about the family was revealed. It turns out that he was not born in the Territory, but was born, in fact, in Arkansas. Samuel pointed out that he was later brought to the Territory and later sold to Jim Davis in the Choctaw Nation. On this same document Sallie was interviewed. When asked she refers to her mother Amanda, and interestingly with a new surname---a Choctaw one "Anchatubbee". 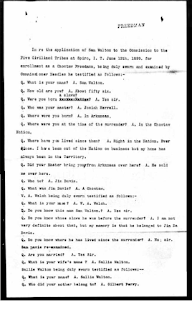 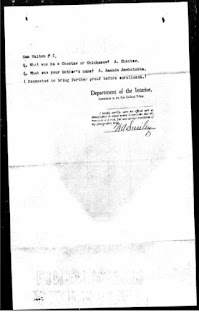 Richard Brashears is then called to testify. He was a leading Freedman in the post Civil War years and served as an advocate for Choctaw Freedman. He speaks to Sallie's history and her mother slave holder. (He erroneously mentions Jonathan Nail's sister as being the slave holder, but it is clarified in a later interview.) 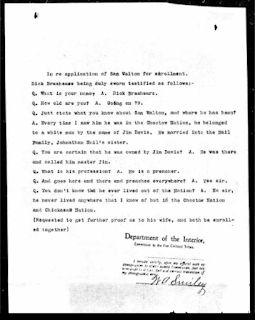 More about Samuel is learned in the interview, when Nail Perry comes to testify. He pointed out that Sallie's mother Amanda was freed under his sister, Emeline. After the interview with Perry, it becomes clear how Sallie was connected to the Choctaw nation, and by whom she and her mother were freed. 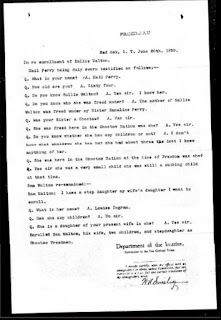 
Land Allotment Records
The family was placed on Choctaw Freedman enrollment card #777. The official "roll number" is found to the left of the name of the enrollee. As a result, the allotment file is categorized under the Dawes Roll Number. In the case of Samuel Walton, my great grandfather, his roll number is 3747. The file pertaining to his land allotment therefore is 3747, and each person whose name is listed on the card has a file pertaining to their land allotment and it is categorized by their roll number. 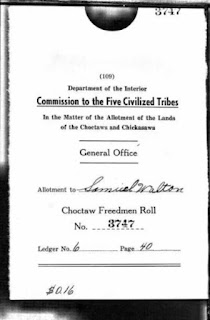 
In this statement data was taken from Samuel Walton, as he represented Sallie in the selection of her land. Included in the document is a legal description of the land that was allotted. 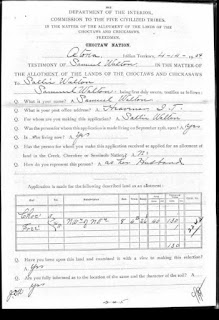 By closely examining the document it is noticed that Samuel Walton was a literate man. He signed his own name and his signature appears. It was pointed out in the earlier Dawes interview that he was a preacher and traveled throughout the territory. Seeing his signature is insightful as it speaks to the fact that he was literate. 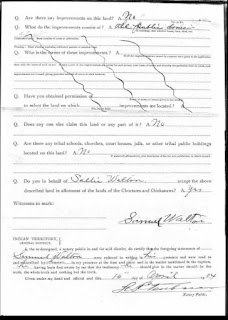 There are a few personal records that also reflect Sallie's history. Folded up in the family bible was a plat map that Sallie kept among her papers. It was found after she died in 1961 and for years it was not clear what it was, until I began to explore the family's history and learned more about the allotment process. 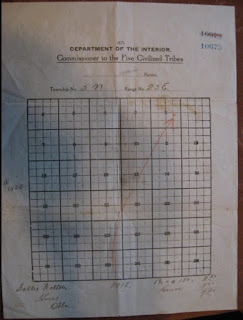 Other notes made in an old family Bible reflected dates of births and deaths, and some of them were clearly born in "I.T." for Indian Territory. For many years it was not known what I.T. meant on those bible pages, until I had begun documenting Sam and Sallie's history. 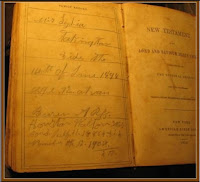 In another set of records, I discovered a set of school records from Skullyville County in the Choctaw Nation. These records are preserved on microfilm in the Family History Center in Salt Lake City, Utah. Among the records were those of the "Colored Neighborhood Schools in the Choctaw Nation. These small schools in Skullyville were established by the tribe, for the children of their former slaves, and they were fascinating, as the staff and teachers were from the same community of Freedmen where Sam and Sallie lived. I compiled the school records into a small booklet. 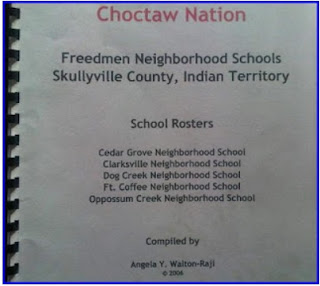 On one of those cards, in the Ft. Coffee Neighborhood School, the name of Samuel Walton was found listed among the students. That Samuel would be the son of Samuel and Sallie Walton, whose name appears as Sam Jr. on the Dawes Card above. 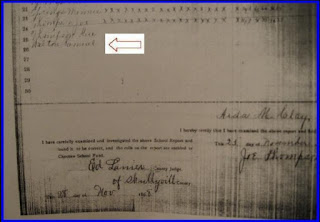 There is much more that can be shared about the life of Sallie Walton. Not much is known about her life during her early years. But she lived through incredible times and survived. I also learned more about her direct ancestry--her mother Amanda, and her grandmother Kitty, who came with the Choctaw Perrys to the Territory from the old country in Mississippi. Sallie was born a slave, during the Civil War, but was freed while still just a tiny child. She then grew up amid at time of critical change in Indian Territory.

Thankfully being enslaved was not a memory that Sallie had to live with, but she did live through the years of westward expansion, and during a time of lawlessness on the western frontier, which was a reality in the Territory. In fact, one of Sallie's uncles was accused of being a part of a group of Choctaw outlaws. This uncle was put on trial in front of Judge Parker, the hanging judge. The circumstances around the case of 2nd great uncle Jackson Crow brought much trauma to the family at the time in the mid 1880s. Sallie would be in her twenties when this occurred. In later years, when family would ask about the old days of west--Sallie was adamant about not talking about that time. And after that she and the family went through the Dawes enrollment process, secured their land allotments all around the time of Oklahoma statehood. She also endured Jim Crow when it became Oklahoma law, and these events were only part of her journey. And she lived long enough to see the beginning of the Civil Rights era.

After statehood, she remained in Oklahoma until the 1920s when she would move across the Arkansas River and spend the last three decades of her life in nearby Fort Smith, Arkansas. There are multiple stories about Sallie that can be shared, but these few facts are presented in an effort to reflect the life in a small way, of an amazing woman who was clearly one who chose to survive.

Samuel died in 1912, and Sallie passed away almost 50 years later, in 1961. With all of the changes that she saw, she was still the same country woman who made  wonderful sassafras tea for me when I was a child. She kept her own identity as a country Choctaw woman intact. And she also kept a strong identity as a black woman in America, always encouraging her grandchildren and great grandchildren to "do good for the race."

I still miss her smile, her potatoes, the scent of mint from her garden, the multi-colored bachelor button flowers that lined the fenced, and even the smell of her snuff. When I work in my garden I think her her massive garden that she always kept, and can smile as I feel her presence with me. Her legacy now extends into multiple families. From the Perry/Walton lines, come new generations of Waltons, Sanders, Bradleys, Dedners and beyond. The legacy of this beautiful Choctaw Freedwoman continues. She was my heart. 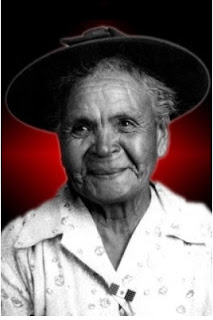 This is the 47th article in a 52-article series devoted to sharing histories of families once held as enslaved people in Indian Territory, now known as Oklahoma. The focus is on the Freedmen of the Five Civilized Tribes, and these posts are part of an ongoing project to document 52 families in 52 weeks.