Driving through the area around Tahlequah, Oklahoma, one will pass a small road with an interesting name. Stick Ross Mountain Road. For many who are part of the Freedmen community in an near the city, his name is well known. Although no known image of him survives, he clearly left his footprints upon the land where he lived.

In early years of his life, he was enslaved by Cherokee Principal Chief John Ross. But upon release from bondage, Stick Ross became involved in the affairs of the local area and left an impression on the community.

Like many people freed from enslavement, participation in the larger society in which he lived was desired. The right to live, vote, and participate in events around him were a strong interest for him. Joseph "Stick" Ross, as well as other freedmen had a similar vision. Before the century would end, he would see himself involved in the affairs of his local area, and also the tribal council itself. He was one of several men once enslaved, to serve their nation. His reputation as an advocate for the freedmen and for the nation as a whole was noted when he was elected to the Cherokee tribal council in 1893. He followed the footsteps of others such as Joseph Brown, Frank Vann, Samuel Stidham, and Jerry Alberty. Ned Irons would later join this circle of Freedmen leaders.

Dawes Card
From the Dawes card Stick Ross appeared in front of the commission in 1901. He was applying for himself, his wife Nancy, son Malcolm, daughters Julia, Amanda, Patsy, and son Clem. It was clearly noted on the card that he was at one time, enslaved by John Ross. Wife Nancy had been enslaved by David Rowe. 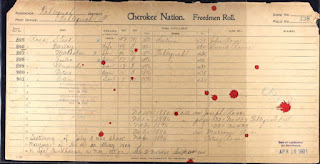 Notes on the front of the card point out that his name had previously been inscribed on earlier rolls as "Joseph" Ross. On the back of the card, it is learned that his parents were Hector and Sallie Ross, and both had also been enslaved by Chief Ross. Nancy's parents were Johnson and Edna Rowe. 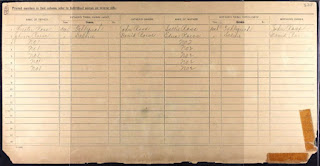 The Dawes Interview
The application process was not a complicated one for Stick Ross. Questions were asked pertaining to the family members, and who was seeking enrollment and the ages of the children. Earlier rolls were examined and he and the others were found on the 1880 Authenticated Cherokee census. It appears that the process was a smooth one for him, and there were no issues to challenge. Perhaps the reputation of Ross himself as a known tribal leader may have had some influence on the smoothness of the enrollment process. All were subsequently enrolled. 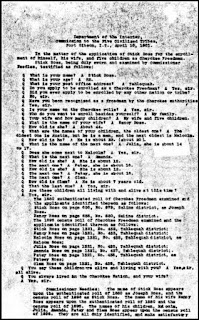 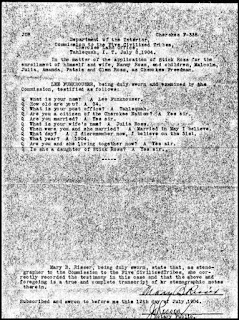 Land Allotment Jacket
Placement of one's name on the Dawes Rolls made one eligible to apply for and receive land allotments. The documents below, reflect the allotment made to Stick Ross himself. One can also see the homestead application, the questions asked, and answers received. 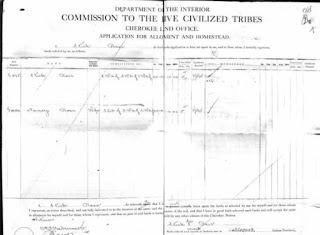 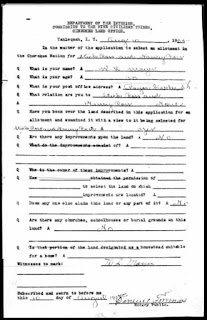 Stick Ross remained in the Tahlequah area, and for years the Ross family land was atop a large hill. As the road led to his land, it became known as Stick Mountain Road. The hill itself was later named Stick Ross Mountain Road. During his lifetime he was a man who obtained other pieces of land and is said to have donated the land for Ross Cemetery, where he is buried. Sadly, his grave is not marked. In recent years however, a marker was placed in the Ross Cemetery to honor his final resting place being there upon the land. 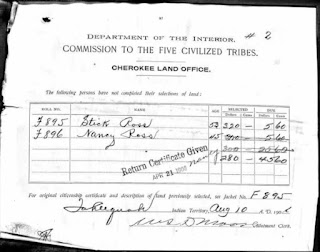 In 2008, some of the descendants of Stick Ross visited the cemetery that bears their Ross surname, and had a small monument placed there in honor of him. Ross was also said to have donated the land for this Tahlequah Freedmen burial ground. Though almost 90 years after his death, a memorial stone was placed in his honor. His influence on the community, shall not be forgotten.

This is the 41st article in a 52 week series devoted to sharing histories of families once held as enslaved people in Indian Territory, now known as Oklahoma. The focus is on the Freedmen of the Five Civilized Tribes, and these posts are part of an ongoing project to document 52 families in 52 weeks.