The Family of Doran and Mary Ann Bruner- Seminole Freedmen

From the town of Sasakwa, the family of Doran and Mary Bruner appeared in front of the Dawes Commission to enroll as Seminoles. On the enrollment card, the father Doran was born a free man in the Territory, yes, as was done with so many--he was placed on the Freedman Roll. Their children were Alice, Ellen Iona, Eva, Georgeann, Geo. Washington, Manda and Lizzie. Another child was born in 1905 named Parah Bruner, whose enrollment card is the third image below. This entire family was part of the Ceasar Bruner band of Seminoles. 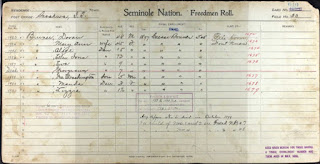 Doran Bruners' father was Dan Bruner and his mother was Rachel Bruner, and like so many especially those from the Sasakwa settlement, his parents had at one time been enslaved by John Jumper. Doran. Mary Ann's father was Ginford Thompson and  her mother's name was Minerva. Both of her parents were once enslaved by Judge Thompson. 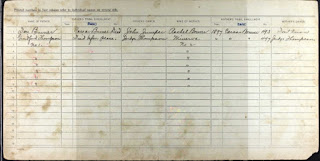 Son Parah's name was placed on Seminole New Born Freedman card #7. Both parents' names appear on the card. The "new born" category appears in most of the tribes, but in many cases some names were simply added on the front of the original family enrollment cards, and in other cases they were placed on new born cards such as this case. 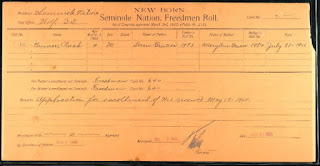 Thankfully, a small interview does exist for this family. There was most likely additional data, because the only focus of this one interview pertains to the death of one of the children. Clearly questions, about the history and parentage of the father and mother would have been taken at the time, but in this case the only document to remain in the file pertains to proving the death of one of the children.

Like many of the Seminole Freedmen a spokesman was called to testify on their behalf. In this case, the band chief Caesar Bruner himself came to testify to verify that one of the children had died. Caesar confirmed that Georgeann had died, and that he was at the family home after the funeral. Also note that Ben Bruner also came to testify for the family. Ben Bruner was also an officer for the Bruner band of Seminoles. 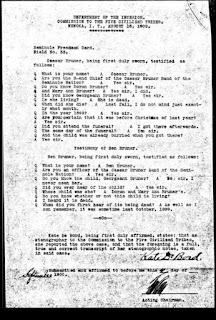 Thankfully there were no complications in the enrollment of this Bruner family. They were allowed to enroll without any challenges made by the Dawes commissioners. Their enrollment however, was that of Seminole "freedmen" although the father was born a free man. Nevertheless, having been approved, they were eligible for the allotment of land they which they accepted.


The names of the family are shown on this first image as they applied for their land allotment. 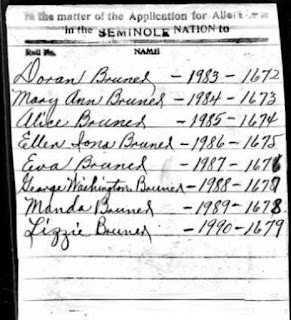 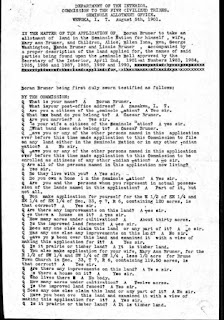 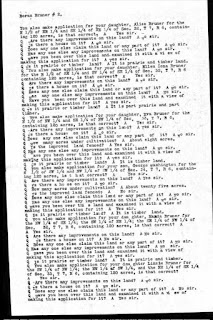 Most importantly the end of this story is summed up in the final question asked, "Will you accept these lands for yourself, your wife and children as final allotments to the Seminole Nation?" His response was clear, "Yes sir." 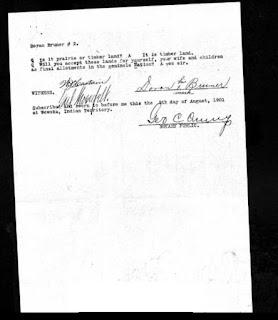 Like the story of many, the family was now a land-owning family, and were able to face their future moving ahead. Statehood came and like all families they now faced a new future in a new state of Oklahoma, and new country--The United States to call their own. Their legacy however, as Seminoles, like those of all of the Five Tribes was one well documented through complicated years of war, peace and challenge. This Bruner family, like others of their band, like others of the same nation, and like others from Indian Territory, have a richly documented history, reflecting legacy, endurance and continuity. May they always tell their story.

This is the 50th article in a 52-article series devoted to sharing histories of families once held as enslaved people in Indian Territory, now known as Oklahoma. The focus is on the Freedmen of the Five Civilized Tribes, and these posts are part of an ongoing project to document 52 families in 52 weeks.
Posted by Angela Y. Walton-Raji at 12:08 PM