This is a story of a blended family with ties to both Chickasaw and Choctaw Nations. This is also a story of people who were bi-cultural and bi-racial. Hettie Lucas and her daughters were enrolled Chickasaw Freedmen. However, this family also has strong ties to Choctaws as well. They lived in the northern part of the Choctaw Nation in Oak Lodge in the 1890s in the Skullyville area, and they had put roots there for some time. Hettie Lucas the family matriarch appeared in front of the Dawes Commission October of 1898. Her interview was recorded, but like many Chickasaw Freedmen it was summarized and the original interview was never included in the file.
On the same day, her daughter Fanny Parks appeared in front of the Commission as well. Fanny applied for the enrollment of her son, Montville and her daughter Ardena Darneal. One thing is significant about the card. A telling note reflects another story not often as visible to many who search I.T. families--Fanny Parks had at one time a relationship with a nearby neighbor--Silas Darneal, a Choctaw Indian. 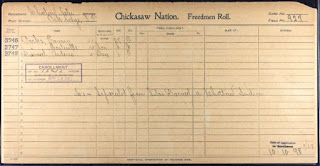 Note highlighting the relationship between Fanny and Silas Darneal:

Fanny was the daughter of a Freedmen as both of her parents had once been enslaved. At the same time she lived in a Choctaw community, and within a nation that had at one time declared marriages between Choctaws and those of African ancestry to be criminal acts--felonies. However, as the story of humankind unfolds, it is clear that personal relationships between people cannot be successfully legislated. And it is also evident upon looking at the reverse side of the card, that Silas Darneal and Fanny were the parents of the child Ardena.

Much more about Fanny's ancestry is learned from the enrollment card. Her father was Tobe Colbert, and her mother was Hettie Lucas. Tobe Colbert had once been enslaved by Jas (James) Reynolds, and Hettie Lucas had been enslaved by Lem Reynolds. Fanny's son Montville Parks was the son of William Parks who was not a citizen of the Chickasaw Nation. Ardena's father was Silas Darneel.

Three things stand out on this card:

1) Fanny's parents were both still living at the time of the Dawes Commission. When a parent was deceased it was marked. In this case, with both parents still living, that suggests that more can be found on this family, because both Tobe Colbert and Hettie Lucas would have enrollment cards, taking this family back even further.

2) The father of Fanny's children were mentioned, and what is not often seen is that Silas Darneal, the father of Ardena was a Choctaw Indian. This is the second time on the same card that the father's Choctaw status was pointed out on this Chickasaw Freedman card.

3) Darneal was still living and would also have an enrollment card, thus taking this family farther back in time into their Choctaw lineage. 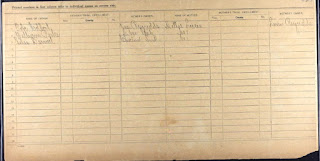 Tobe Colbert Enrollment Card
Tobe, the father of Fanny, lived in Tishomingo during the years of the Dawes enrollment, and applied for enrollment in September 1898. He clearly did not live in Choctaw country as did his descendants, but remained in Chickasaw country. Tobe Colbert, was the son of Philip Colbert who was enslaved by Lem Colbert. Tobe's mother's name is not given, and therefore unknown. He enrolled with his wife Charlotte who had been enslaved by Jackson Kemp. 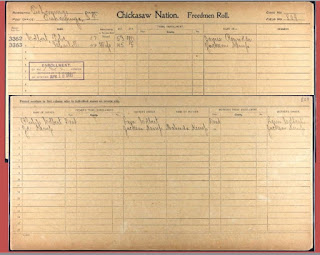 Chickasaw Freedmen #809
(Source: Same as above)

Again, instead of the traditional interview with questions and answers, the commission replaced the real dialogue with a two-sentence summary. 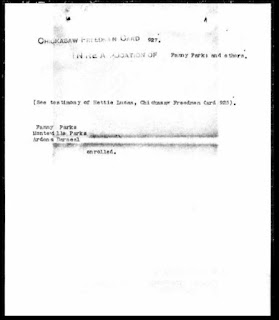 Hettie Lucas, Fanny's mother was also enslaved by the same James Reynolds who had enslaved Tobe Colbert. It is clear that they no longer lived together, as he was married to Charlotte, and Hettie did not enroll with him. By her name she could have possibly re-married, but it is not clear and not stated. Her parents were Bill Reynolds and Tempy Reynolds, and both were by that time, deceased. 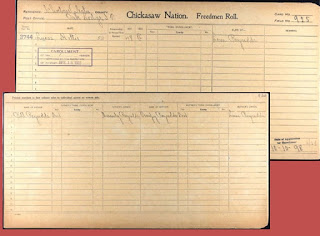 
Hettie's interview was longer than one sentence, but it was clearly still a summary, because the questions asked were not included. There is no indication when Hettie may have left the Tishomingo area to relocate to the Choctaw community of Oak Lodge, but is from there where she was interviewed and clearly lived. 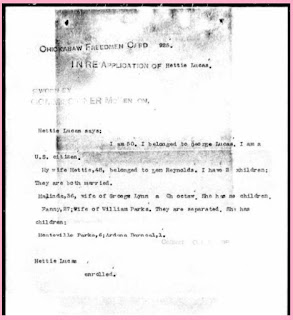 Silas Darneal is enrolled on card Choctaw Card #2696. He lived in Skullyville County in the Oak Lodge area, as did Fanny and her family. He was married to Henrietta and had a family with her. The children Elijah, Dallas, Ida and Emma. They were siblings to Ardena, although they most likely never met in their lifetime. 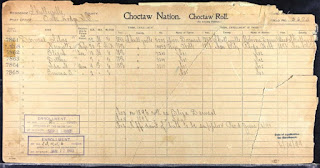 
Silas Darneal's father was James Darneal. He was enrolled on Choctaw Card #2670. His parents were Anselem and Betsy Darneal. They are direct ancestors of Ardena, and from the mother Betsy, the Choctaw line comes. 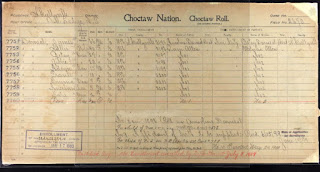 Life in the Choctaw Nation

For unknown reason, Fanny's mother Hettie moved to the Choctaw Nation and remained there. It is not known when she moved from Chickasaw country northward into the Skullyville area, however, she remained there. Fanny had clearly settled there as well, eventually and raised her children there. Her life, and associates were firmly planted in the Choctaw Nation, and her children and subsequent generations would remain in the same community for over a century.

Choctaw Heritage of the Fanny Parks descendants
With this documented tie to a Choctaw by blood, one might assume that in spite of their registration as Chickasaw Freedmen, any of Fanny's children or grandchildren that were direct descendants of her daughter Ardena, be eligible for enrollment as Choctaw citizens. However, that is not the case. In fact, several years ago a direct descendant of Ardena Darneal applied for enrollment to the nation. Their application was rejected, and like many Freedman descendants, the rejection was one of many that have routinely become commonplace for Oklahoma based tribal descendants especially of descendants of Freedmen.

Her life and legacy are strongly rooted in the soil of Indian Territory. One of the grandchildren of Ardena Darneal, and great grandchildren of Fanny began working on the restoration of the Roseland Choctaw Freedman Burial ground which lies adjacent to the Choctaw Nation Skullyville Cemetery.  Many of those buried there were once enslaved by the people on the other side of the fence that separates the two communities. The descendants work to keep their family legacy alicve.

Fanny's family today still resides in the old Skullyville community and many live in Fort Coffee today. The family has established a presence for over 100 years in the same community, living and contributing to the local community. May the legacy of this Chickasaw/Choctaw blended family continue to thrive and prosper.

This is the 43rd article in a 52-article series devoted to sharing histories of families once held as enslaved people in Indian Territory, now known as Oklahoma. The focus is on the Freedmen of the Five Civilized Tribes, and these posts are part of an ongoing project to document 52 families in 52 weeks.
Posted by Angela Y. Walton-Raji at 5:31 PM

Ardena is my grandmother , the mother of my father Lonnie Jones SR., he is one of the many children she had with Johnny Jones.

thank you to the person that wrote this blog. I look forward to learning more of my family.

Ardena is my great great grandma im named after her i have a picture of her and i look just like her, She had a daughter named queen Easter and a grand daughter named queen Ester Mildred massie which is my grandma who is still alive she had a daughter named Barbara Elane massie who has passed on my mother and i am lateaka massie McDonald Bizzell i have 3 siblings Bobby ray jr. McDonald
Travis Deion McDonald and Hydeia Renee McDonald also i have 2 children and to grandchildren
Demarcus delane byers and marciona Byers.my children are mystacia pettit and Queen McDonald.