Monday Barnett of the Creek Nation

From the Creek Nation, the Barnett family is strongly rooted. This family has a rich history going back to the days before the Civil War. Monday Barnett was 49 years of age when he appeared in front of the Dawes Commission in order to apply for enrollment of himself, his son Alfred and daughter Leoda. They actually resided in Tullahassee and they were all members of Arkansas Town. At one time, Monday was enslaved by Dick Barnett in the Creek Nation. 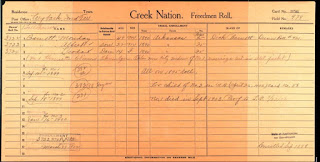 Monday's father was Ketch Barnett, and his mother was Katie. Dick Barnett was the slaveholder of Ketch, and mother Katie had been enslaved by Katie Nicole. All of the family members were members of Arkansas Town. Although Monday's parents were deceased by the time of the Dawes Commission, they were enumerated on the Dunn Roll many years earlier.

Although no Application jacket exists for this Barnett family, another glimpse at the family's history comes through Alfred's interview in the 1930s with the Indian Pioneer Project. What is fascinating is that he also provides a brief sketch about the life of his grandfather Ketch Barnett, who was a leader during his time. Ketch Barnett---Monday's father traveled with a delegation of Creeks to Washington to speak on behalf of Creek Freedmen. His associates were Harry Island, Cow Tom, and others well known in 19th century Creek history. 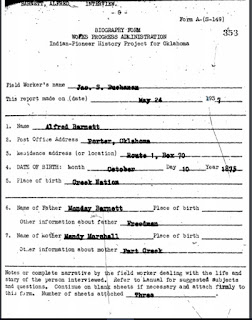 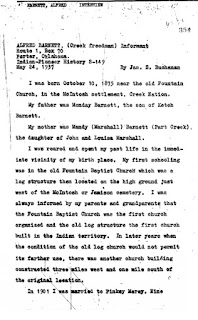 According to Albert, Ketch was also a Baptist minister and was pastor of Fountain Baptist church. The only difference is that he refers to a different person as the slave holder of his grandfather, and says that his grandfather was enslaved by Ben Marshall.

Fountain Church was a major church on its own in the mid to late 1800s. In one of the Pionner interviews, a sketch was actually made of the original church, where Monday's father Ketch Barnett was pastor. The sketch is found in the interview with Charles W. Ponds, of Muskogee conducted in April 1937. And also thanks to the interview with grandson Alfred, the actual death date of Ketch Barnett is also revealed. 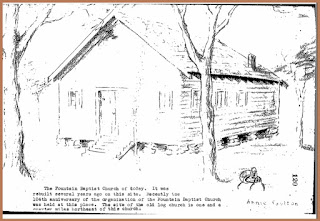 
Source: Same as above 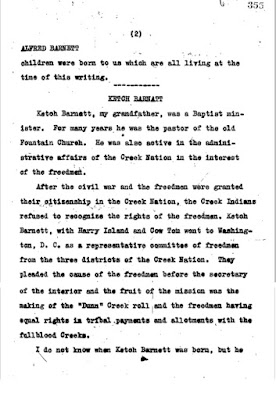 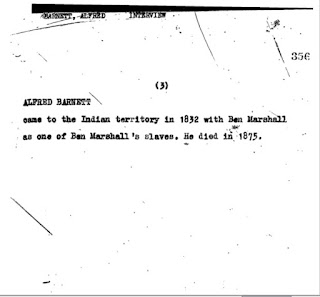 Land Allotment Records
Thankfully the land records do exist for the Barnett family and there we find the words of Alfred as well as his father Monday Barnett. In 1900, Monday appears in front of the commission, and he speaks on behalf of himself regarding his land in the Wybark area. 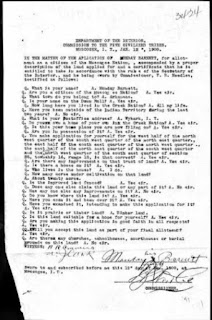 A year later, we later see in 1901 where Alfred represents his father with Power of Attorney. It is not clear if Monday was gravely ill or not. The land that was being allotted was partly timber land, and not farm land, or prairie land. 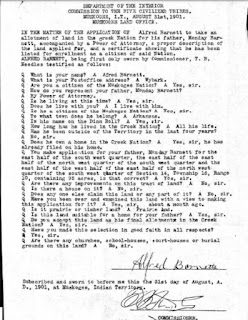 It is not known when Monday Barnett passed but the history is a rich one. From the one enrollment card, multiple generations are reflected and this family with ties to Creek leader Ketch Barnett has a colorful history and past. Their history predates removal and hopefully the Creek legacy is honored and respected by descendants to this day.
**********

This is the 44th article in a 52-article series devoted to sharing histories of families once held as enslaved people in Indian Territory, now known as Oklahoma. The focus is on the Freedmen of the Five Civilized Tribes, and these posts are part of an ongoing project to document 52 families in 52 weeks.

On the question of Ben Marsall being the slaver...he stated when came from Alabama...Slaves were often traded, sold, or left as property in estates or even bartered for debt before the 1866 Creek Treaty....it seems possible that at the removal from Alabama, Ben Marshall was his slaver, but some time afterward he became a slave of the Barnett family....great post Angela!