Who Will Meet me on the Cultural Bridge? 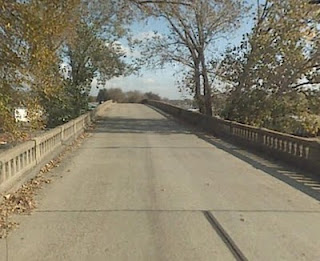 After attending the sotrytellers symposium in Muskogee Oklahoma last month, the concept of being met on the bridge was a wonderful metaphor that continuously comes to my mind.
I was glad to be there with colleagues from the Choctaw and Chickasaw Freedmen community, and with colleagues whose focus is to research, and document our own history.  We arrived in Muskogee with no expectations of warmth or inclusion, and with no concerns for exclusion rejection to come from native sectors.  And on one level we surprisingly did find inclusion thanks to the Five Tribes Museum, and on another level the exclusion expressed from others, came as no surprise.
The fact is: We were there, because our ancestors were there. Period.
But what I was left with, was the need to find those incredible stories of survival and persistence, and also of resistance, exhibited by Africans brought into Five Tribes as slaves.
I realized that if we don't tell our stories their history might be altered---by fiction.
The story of Crossing Bok Chitto by Tim Tingle, was a heart warming one---- but, if not noted by those of us who come from both Mississippi and Oklahoma Choctaw communities---if  we don't do what we must do--history might be altered. If we do not tell our stories, inaccuracies might be recorded as truth.  We must share those stories of what happened-----all of the stories of what happened.
As Joyce Bear, former cultural preservationist of the Muscogee Creek Nation, told her stories from her grandmother---we too have to find those stories from our own grandmothers.  One could not help but be moved when hearing the story of little Creek children and how they were abused during the time of the removal.
BUT----there are also, those stories of little slave girls, being sold as breeders, and at the age of 10 when no babies came, they were sold again----discarded as a bad purchase. Mary Grayson's mother was such a child, and I can only ask---who wept for that child?

(Excerpt from WPA Interview with Mary Grayson 1937)
Who tells her story?
Who sees her humanity?
Who cares that her 10 year old body was ravaged by her Creek owners, taking her west on the removal?
She suffered just as much as the Creek children also moving westward at the same time.
So---------shouldn't her stories also be told?
Whose eyes fill with tears when some people speak of the time when the fires were lit?
Well African eyes also saw those same flames. Who speaks for them?
Stories such as Crossing Bok Chitto are heartwarming, but again we must be careful.  We have to look at all resources to tell the other stories.  Slavery happened, and terrible things occurred.  But there were exceptions, and Crossing Bok Chitto tells a story of one such exception.
BUT that exception was not the norm---there was no strong sense of abolitionism in the 1820s in Mississippi.
The slave uprisings in Choctaw country as late as 1861, in fact speak to the desire for freedom, felt in the bosoms of the enslaved.
The ads for runaway slaves in papers such as the Choctaw Intelligencer speak to the efforts to keep them in bondage. 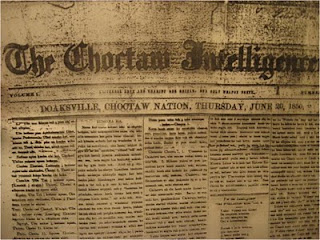 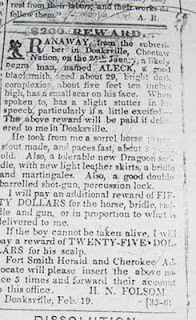 Runaway Slave Ad, Choctaw Intelligencer 1850
BUT when we tell those stories, we also must be fair.  As much as slavery prevailed it must be noted most Choctaws did not own slaves. There were relationships that prevailed and some of those relationships continued after slavery ended in 1866.  There were family ties, there were friendships and there were communities where former slaves lived with their Choctaw compatriots.
We don't have to sugar coat it, we only have the obligation to tell what happened.  However, there do remain, many challenges to telling what happened.
Today---so many of us are now strangers to each other.
There is now a fear of interaction, between descendants of those once enslaved, and the Choctaws, and Chickasaws who lived among each other.
Interestingly, if one was to visit black communities in Tishomingo, today, or attend a family gathering, one will find Pashofa served alongside the collard greens. At the family potluck one brings the cornbread while another brings the fry bread.  Grape dumplings are served in both black and Indian communities.  And many folks  in both communities have the great uncle who knows where to go and get the best sassafrass out in the country.
But now today----we don't greet, or receive greetings, we rarely smile at each other and keep a strange and safe distance from each other.
And we heard repeatedly ---when push comes to shove there is a need to go "behind closed doors."  One of the Chickasaw speakers talked about the insistence upon telling the history---though admitted that she never knew even what clan she was from.  And of course there was the reminder, that some stories will not be told, they are reserved for certain people.  The message was sent and it was received.
None this was a surprise, to hear, and it was perhaps a defensive mechanism.  Recent years and lawsuits have brought out feelings of discomfort-----and even mentioning slavery in Indian country lets out a secret-- that five tribes, specifically THE Five Tribes held others in bondage, practicing the same institution---black chattel slavery.
Ok----slavery happened. Period. It was the times.
With that said----people survived.  People lived and people shared many things, including land, life and in many cases family.
No one wishes to knock down your closed doors.  We too have doors that close.  We too have stories to tell, and we too, have prevailed.
We have more in common, than not in common.
So I wonder, who will meet me on the Cultural Bridge?
Posted by Angela Y. Walton-Raji at 11:56 AM

AS usual Angela, you hit the nail on the head. Thanks again for your thought provocating message.

This was one of the best posts I've read in a long time. Excellent, well done. You give us hope and incentive to cross the 'cultural bridge'.

Peace,
"Guided by the Ancestors"

I have successfully broken through the 1870 brick wall regarding the last slave holder. My ancestors name is Andy "Andrew" Slade born in Yanceyville, Caswell, North Carolina in 1813.
This was a great accomplishment for me and my family. My lineage extends not only from African-Americans but also from the Choctaw Indian tribe, the Irish from Wurttemberg, Ireland and from others I'm in process of researching.