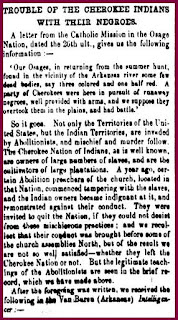 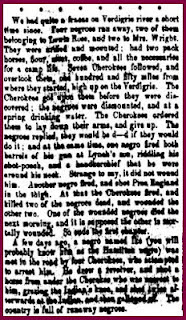 The Liberator September 26, 1856 p. 1
Source: Accessible Archives
Transcription:
We had quite a fracas on Verdigris river a short time since, Four negroes ran away, two of them belonging to Lewis Ross, and two to Mrs. Wright. They were and rifled and mounted; had two pack horses, flour, meat, coffee, and all the necessaries for a camp life, Seven Cherokees followed, and overtook their, one hundred and fifty miles from where they started, high up on the Verdigris. The Cherokees got upon them before they were discovered; the negroes were dismounted, and at a spring drinking water. The Cherokees ordered them to lay down their arms, and give up. The negroes replied, they would be d—d if they would do it; and at the some time, one negro fired both barrels of his at Lynch's son, riddling his shot-pouch, and a handkerchief that he were around his neck. Strange to say, it did not wound him. Another negro first, and shot Pins England in the thigh. At that the Cherokees fired, and killed two of the negroes dead, and wounded the other two. One of the wounded negroes died the next morning, and it is supposed the other is tally wounded. So ends the first chapter.
A few days ago, a negro named Ike (you will probably know as the Hamilton negro) was met in the road by four Cherokees, who tried to arrest him. He drew a revolver, and shot a horse from under the Cherokee who was nearest to him, grazing the Indian' s knee, and shot afterwards at the Indian, and then galloped off. The country is full of runaway Negroes.
* * * * *     * * * * *      * * * * *
These two articles both appeared in William Lloyd Garrison's newspaper The Liberator, in 1856, several years before the Civil War. It would be a full ten years however, before the slaves would be completely free in Indian Territory, when the Treaty of 1866 finally abolished the practice of chattel slavery in the Territory.
Stories such as these are not often mentioned in American history, but several thousand people descend from those held in bondage in Indian Territory. They too longed like all men, like all women to live as free people. And when opportunity came, they too resisted and fought for their freedom. Some won, and others lost the battle, but their stories deserves to be told.
Posted by Angela Y. Walton-Raji at 4:51 PM

Fantastic post. You're absolutely right that it needs to be remembered. I'm going to post this on The In-Depth Genealogist FB page. :) www.facebook.com/theindepthgenealogist

Have a great Thursday!

Deep and thoughtful. My first time of reading anything on the Indian tribes and African chattel slavery. Have you come across the historical fiction, Before We Set Sail (www.beforewesetsail.com)? It's a great book on slavery in 18th century West Africa.