In general there are challenges when researching Oklahoma-based families, especially those with ties to the Five Civilized Tribes. Within those records are those reflecting families from the various bands within the Seminole Nation. The research can be even  more challenging when researching Seminole Freedmen. There are records, and thankfully there are enrollment cards but when it comes to the application jackets and interviews, the files are quite slim and many interviews are in fact not in the file. Yet there are records to find and stories that can be gleaned from the records. Such is found in the file of Fanny Turner, of Earlsboro, Indian Territory.

Fanny and her husband Tom Turner lived with their family in Earlsboro Indian Territory. Living with Fanny and Tom were her other children from previous marriage---Jesse Brown and Nora Bruner. In addition their two youngest children Eva and Crisella were also in the house. They are all enrolled on Seminole Freedman card number 651. 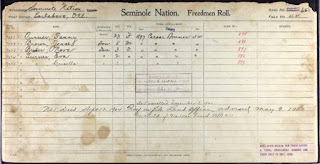 Because Fanny was a young woman at the time, she was born many years into freedom, but on the reverse side of the card, it is noticed that her mother had once been enslaved by Seminole Short Bird. her father was Cesar Payne, and it appears that he was not enslaved at all, for he too was born after the war. Her mother Dinah Walker was the parent said to have been enslaved. 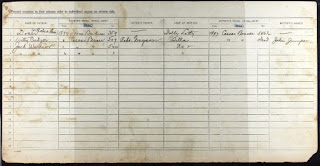 The application jacket usually contains interviews of the applicants. Unfortunately there were only a few scant hand-written notes papers including one birth affidavit for Fanny's youngest child Crisella. Though good information, the missing interview could have provided more about the family itself. one small note simply contained the names of  Fanny's immediate family 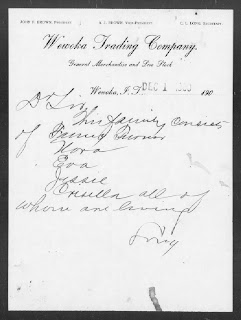 Certainly the family that descends from Fanny Turner will be encouraged to find the birth record of Crisella, Fanny's youngest child. 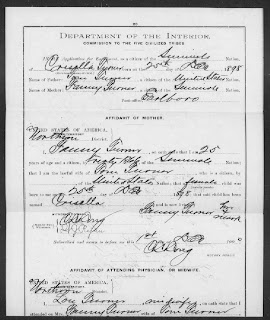 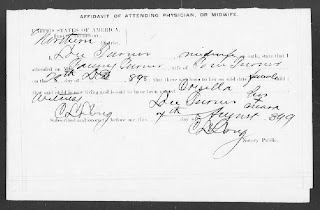 But now with the enrollment  card, and the application jacket, what other resource could be out there to glean more information about the family? Finding more information  would require examining things all over again, in addition to expanding the search to other record sets. I decided to take 3 steps to find more data on the family:
1) Re-examine the enrollment card.
2) Analyze the land allotment records to find more data.
3) Find the family in the Federal census or other records.

1--Re-examining the enrollment card.
The back side of Freedmen enrollment card always contains additional information. The names of the parents are reflected and if the parents were enslaved the name of the slave holder is included. By analyzing the data on the card, it is noticed that there was nothing suggesting that Fanny's parents had died--so there was a strong possibility that they were still living at the time, and therefore would have had a card of their own. Fanny's parents were Cesar Payne and Dinah Walker. A check was made and both did have enrollment cards.

Fanny's Father Cesar Payne:
As it turns out, her father Cesar Payne was still living at the time of Dawes enrollment, and thus there is a card reflecting him as well. He is enrolled on Seminole Freedman card number 684. He resided in the town of Sasakwa. His parents were Sam and Rebecca Payne, both of the Dosar Barkus Band. Sam and Rebecca were Fanny's paternal grandparents. This provides additional information for anyone researching the Payne family.

The File of Cesar Payne: 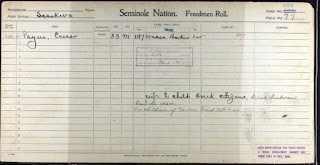 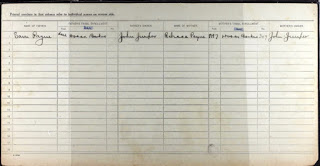 As was noticed, Fanny's mother was indeed alive during the years of the Dawes Commission.  She was a member of the Dosar Barkus band, and she had at that time, now married to a "states" man called Eugene Walker. Her husband before Walker was Jim Bennett who was by that time, deceased. Dinah's parents were Mack (no last name given) and Maria Foster, of the Dosar Barkus band, and one enslaved by Seminole Geo. Cloud.

There is much more to study and more people to follow based on data from this card. The descendants of Dinah extend into multiple families and the story of Fanny Turner's extended family is complex and full of data. 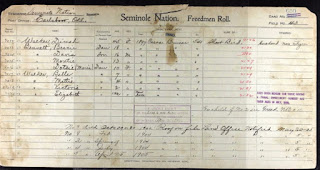 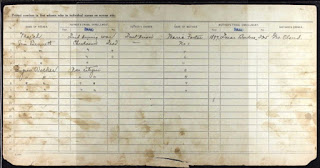 2. Analyzing the Land Allotment Applications
The decision to study the allotment applications would prove to be very successful! Although the Application jacket was missing an interview, a two-page interview with Fanny Turner was found in that file! Good information about her, where she lived and with whom, as well as issues about the land itself was contained in that file. 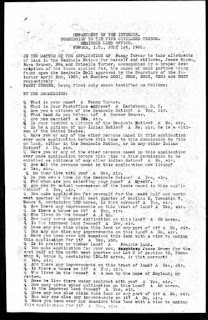 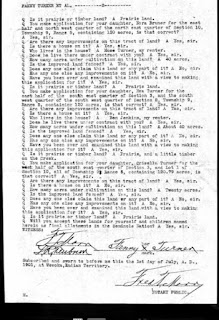 This interview was detailed and provided great information about the family. There was discussion about the improvements made on the land, and so much more. It was also revealed that there were renters also living upon the same land where Fanny and her husband and children lived.

In addition, one critical piece of information was contained  in that file. Fanny died before receiving her allotment. Contained in that record was a notice that she had died in September 1904. 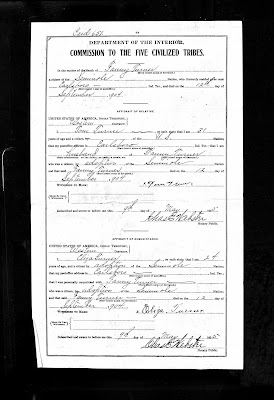 Death record for Fanny Turner
Source: Same as for above image

3. Examining Census and other records
The federal census also reflected the Turner family living in the Seminole Nation, in 1900. Husband, Tom, Fanny and the others are reflected there also.

And in 1910 the family is found now in the new state of Oklahoma that joined the union in 1907. Fanny was now deceased and Tom is reflected as a widower in that census year. He was most likely by 1910 living upon the land allotment of the family as his late wife and children were all members of the Barkus band. Both census years point out that Tom was a citizen of the US and not any of the tribes of Oklahoma, as he was born originally in Texas.

This file is a clear example of how extensive research can reveal many details about an ancestor's life when upon first glance the file is small. By re-examining the enrollment card two additional enrollment cards were found leading to the names of more ancestors for this family. In addition examination of the cards also reflect that extended families and children from previous relationships show how many families overlap in the same region.

This family is a strong Seminole family with strong Seminole identity being reflected in both the Barkus and the Bruner bands. In addition, their family did not live in isolation as some of the family members had a spouse in the Creek Nation. There is much more that can be gleaned from the Turner family of the Seminole Nation and hopefully these records will encourage Turner descendants to study more of its rich history. And in spite of the fact that the interview was not kept in the file, it is clear that more information about the Turner family was found.

(This is the 15th article in a series devoted to sharing histories and stories of families once held as slaves in Indian Territory, now known as Oklahoma. The focus is on the Freedmen of the Five Civilized Tribes, and these posts are part of a project goal to document 52 families in 52 weeks.)
Posted by Angela Y. Walton-Raji at 8:42 PM

Such a wealth of information when you dig deeper.

Thanks Angela for posting this. You put a lot of work in this. I want to add another bit of info on Caesar Payne. He had a child, Matt Payne, with Mollie Alexander, Seminole Freedman card 699 when he was around 23 years old. Mollie is the daughter of Lucy Bruner and Albert Alexander, raised by Lucy. Lucy's husband Tom was the brother the brother of my Great grandfather Ben Bruner. Oh,Tom and Lucy were first cousin's as she was the daughter of his uncle Caesar Bruner

Some that info is not correct. Fanny's land is what i own and live on to this day in Seminole. I have the records of that land and everything from that allotment of land.