The story of William Alexander is an interesting one. He was a relatively young man when the Dawes enrollment process unfolded in Indian Territory. This young man had become active politically in the community of Chickasaw Freedmen. He was among a group of Freedmen who met at Dawes Academy where a convention of Freedmen had gathered. This meeting in 1898 was a critical one because the status of Chickasaw Freedmen was one of an un-adopted people, without a nation to call their own. This convention was a major one where they addressed their concerns about an uncertain future.

When the Dawes Commission came to the Stonewall area in September 1898, William Alexander was the first to be interviewed.  He was placed on Card #1 and his roll number is also #1. 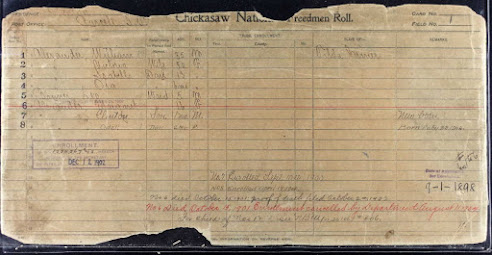 Source: Same a above

The participation of William Alexander in the social issue of the day would have brought about a strong belief in his influence as a leader, and his stature on the local level. As an active member in the Committee of Chickasaw Freedmen it is understood how he was the first to be interviewed in his area by the Dawes Commission.

His influence should not be forgotten.