Remembering the Creek and Seminole College of Boley 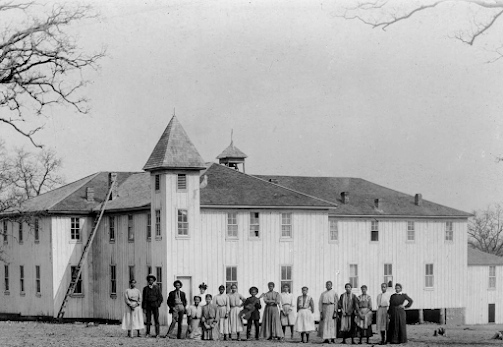 Like the other institutions, nothing remains of the old Creek and Seminole College, an educational institution built on five acres of land donated by Lucinda Holloway McCormick. The founder was John Leftwich of Alabama who was strongly influenced by Tuskegee founder, Booker T. Washington.

The school was sustained mostly by donations and endured several years of financial distress. In 1912 a tragic fire struck the school, which resulted in the deaths of 5 of the students. The fire closed the school for several years, but by 1916 the school was removed to Clearview, and the Creek Seminole Baptist college was established there. The school operated till the mid 1920s before closing its doors, never to reopen.

The few short years of the Creek Seminole College were an effort to bring education to Freedmen communities in Oklahoma, a land where the new state law of segregation brought more obstacles to the descendants of Freed people. Though the life of the school was short, its history is remembered here, in an effort to honor institutions that should be a part of the narrative of Oklahoma's Freedmen.