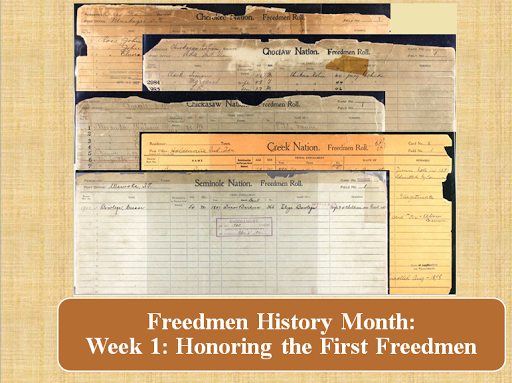 As many in the country are launching various aspects of Black History Month, I have decided to honor and celebrate my corner of the diaspora by honoring the Freedmen of Indian Territory, now Oklahoma.

The Freedmen were those people once enslaved, by Five tribes--Cherokee, Choctaw, Chickasaw, Creek and Seminole Nations. In addition there were some some free people of color who had not been enslaved, who were also categorized in the post Civil War years as Freedmen. After the war ended, the tribes that had fought with the south in the Civil War, signed a treaty with the United States to abolish black chattel slavery. The treaties were signed in Ft. Smith Arkansas, and the official ending of black chattel slavery ended. Though it took some time in many communities such as with Chickasaw Freedmen, freedom did eventually come to all of those newly freed slaves.

In spite of effort to remove them from the Territory--their tribal nations had been their home for decades and they remained. By the end of the 1900s there were over 20,000 people designated at Indian Tribal Freedmen. They were part of the Dawes enrollment process that made them eligible for land allotments prior to Oklahoma statehood.

Though the process did not treat all Freedmen equally, they still acquired their land, and they remain among the most documented people of African descent to live in Native American communities, and who lived with the culture, language, folkways, and spaces. Their presence is a strongly documented one, and their voices are among the least heard when speaking to their amazing history.

During Black History Month 2021, this will be a series devoted to honoring their history, their presence, their stories and their legacy.

This week's focus will be on The First Freedmen.  These are the Freedmen on the Dawes Roll found on Card #1 in each of their tribal nations. Throughout this week the story of each of those First Freedmen will be examined and shared.

Follow each day this week to read about these individuals and their history.