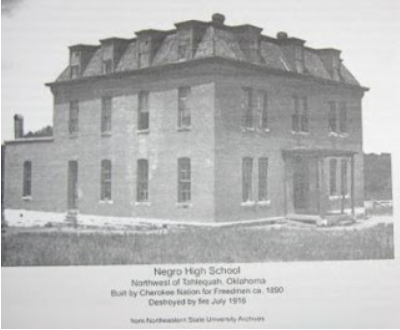 A few miles northwest of Tahlequah, Oklahoma, somewhere lost overgrowth one might find what may still remain of an area known as  Double Springs, I.T. In that area, there may be a few bricks that may be the remains of the Cherokee Colored High School. Original plans were to place this school in the Bartlesville area, but those plans were changed when white citizens of the Bartlesville area thwarted the plans, wishing to have no Negro school in their area.

The site was selected in a very remote location away from any city or town. S. W. Ross was interviewed in the 1930s about the school and he summarized the history briefly in the Indian Pioneer Papers: 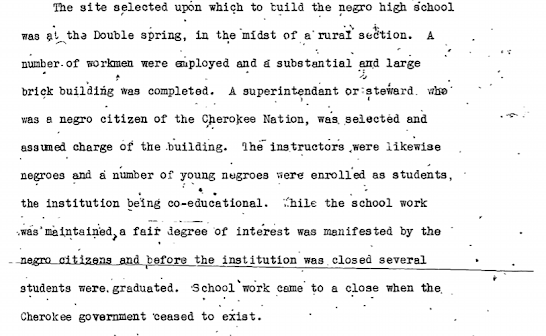 University of Oklahoma Libraries, Western History Collection
Interview with S. W. Ross, October 29, 1937
The building stood empty for a few years except for one caretaker after the school closed. It was then set ablaze and burned to the ground. The school was the one sole school for Cherokee Freedmen, citizens beyond the primary grades.

A detailed history of the school was written by Dr. James McCullaugh from the University of North Iowa. The journal was published in the 2010 issue of Voices of Indian Territory.

The schools is one of the missing landmarks of Oklahoma Black history. Hopefully its history will not be forgotten.