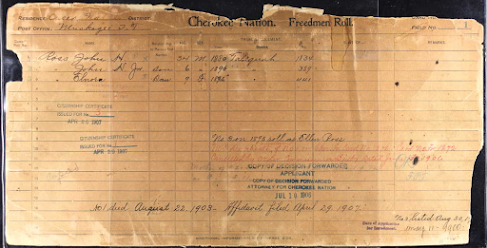 From Muskogee, I. T. came the application of John H. Ross, a Cherokee citizen. John Ross was the son of Stephen Ross who had once been enslaved by Cherokee Chief John Ross.

The family lived in Muskogee. Taking note of John H. Ross, age, he may have been the first person in the family line born into freedom. He was born about 1866. His parents were Stephen Ross and Emily Humphrey. While his father Stephen was enslaved by John Ross, his mother Emily Humphrey who was still living at the time. With him on the card is his son John H. Ross Jr.,  and daughter Elnora.

Emily, his mother was on her own enrollment card, and she was clearly a woman who was the matriarch of her own family. When there was a concern about daughter Elnora whose name appears on the card, Emily, the grandmother went to testify on her behalf.  She was an elderly woman with a strong sense of self. 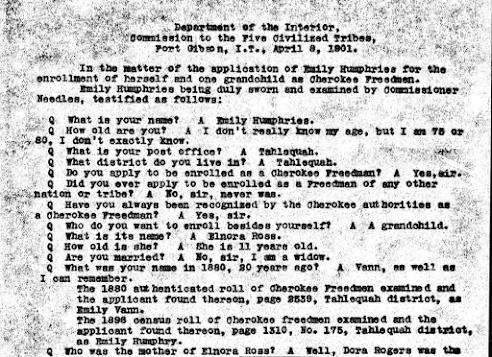 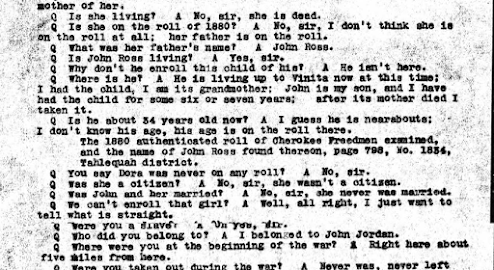 John Ross's Mother's testimony for Elnora
John H. Ross's case became a complicated one, although his was a small family, and at first glance it was an uncomplicated one. But the case became more complicated when in 1902, he applied to enroll an Elnora Ross. There were many questions about child Elnora, because the grandmother Emily claimed that the mother was Peggy and John himself claimed that the mother was Dora, who had died earlier. It was later revealed that there were two children both of whom were called Elnora, and fathered by John H. Ross.

Eventually the issue surrounging the child Elnora was revolved and her name was added of John H Ross' card.

A question arises about how John H. Ross came to be the first Cherokee Freedman enrolled and place on the card.  This likely stemmed from the fact that John H. Ross had been connected to one of the more proinent Cherokee families. But at the same time, the status of being once connected to the family of Chief John Ros, could have influenced his being placed to highly on the Freedman Roll. The cse of the child Elnora's status is what made an otherwise simple case to a more complicated one.
After Elnora's enrollment case was resolved, the issue of land was later complicated by the fact that lands allotted for John Ross Jr. and sister Elnora were impeded as non-citizens had already begun settling on the land. It is not clear if they were truly "intruders" but land assigned to them were disputed for some time. Guardians were appointed for the two minor children, but the record does not indicate clearly whether the two Ross children ever received their allotments. Many cases of guardians were reported in the years after statehood, where Freedmen and Indians by blood lost land to guardians, and land grafters and swindlers. Hopefully the Ross's did get some of the lands allotted to them, but the allotment files did not present a clear resolution of the outcome of their case.
Eventually the family of John H. Ross was resolved, but unfortunately this was after his death about 1908. However, the family continued to thrive. His Presence in the nation continued through his daughter. The Ross family did thrive into the 20th century.

This has been an effort to document some of the stories from Indian Territory. The case of the first Freedman case to unfold in the Cherokee Nation, provides an interesting glimpse into late 19th and early 20th century living in the Territory. John H. Ross was the first of over 3000 cases of Cherokee Freedmen to follow. He made history as the first Freedman, but left the door open through which thousands more followed.