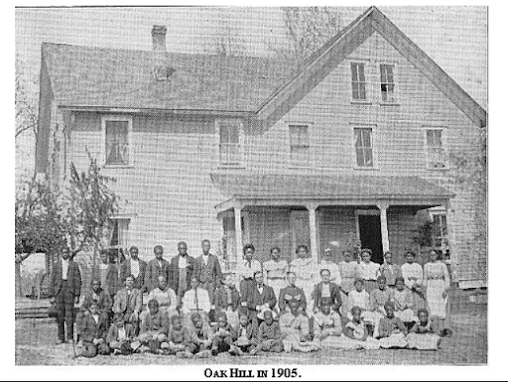 Thanks to the work of Robert Flickinger, the history of Oak Hill Academy is known. This school was founded by Presbyterians who lived and worked in the Choctaw Nation. The school was established in the late 1880s when the goal was to bring education to children of  Choctaw Freedmen. The school was noted for the immaculate grounds and the structures of dormitories for both boys and girls.
Many of the graduates of Oak Hill remained in the area to emerge as leaders. Wiley Homer established a church in the area working with the Presbytery of Kiamitia. 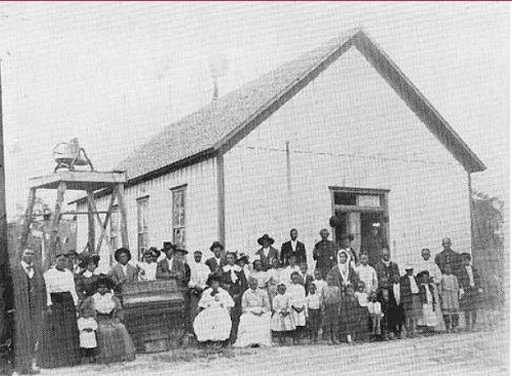 Wiley Homer with Presbyterian Church in Grant, I.T.
Homer was a notable graduate of Oak Hill Academy
A roster of students who attended has not yet been found, but the work by Flickinger written in 1914 did include some impressive images of several of the students, staff, and also the grounds of the school.  The name was later changed to Elliott Memorial in 1912 and was remembered for many years after that time as Elliott Memorial. A historical marker is located near Valiant Oklahoma dedicated to the memory of the school once known as Oak Hill. 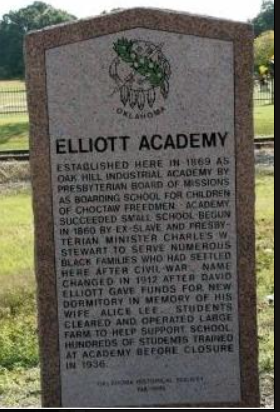 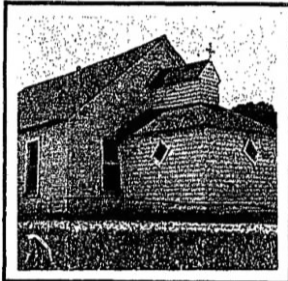 Image Source:
The Daily Oklahoman
Oklahoma City, Oklahoma
August 8, 1971
In 1901 a decision was made by a group of Chickasaw Freedmen to establish a literary and industrial school near Berwyn. An appeal was made to the public for assistance in purchasing the property to become Dawes Academy.

The school did not last many years after statehood, and by the 1920s a segregated school system was established throughout Oklahoma, and local public schools were established.  Years later an article appeared in the local newspaper, the Daily Ardmorite about the school in May 1969. Following that article Mrs. Gladys Rhodes wrote a letter to the editor, describing the exact location of Dawes Academy in response. Additional notes about the school were later added to the letter as note, perhaps by the recipients interested in the school's history on the newspaper staff.

In regard to the Reporter's Notebook in the Daily Ardmorite of May 15th, the Dawes Mission School is about three miles north of Berwyn, now Gene Autry, and six miles east of Springer, in later years it was known as Dawes Academy.

A church is still there, known as Calvary Baptist. You ask for this information.

An image of the letter, followed by a close up image, both appear below.  Also several interesting notations were written upon the letter clearly written in a different handwriting, possibly by newspaper staff. 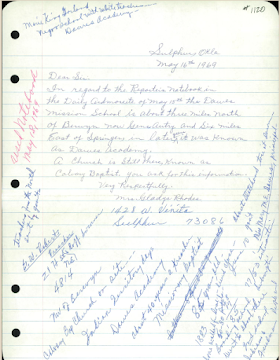 Letter sent to Daily Ardmorite about Dawes Academy in 1969 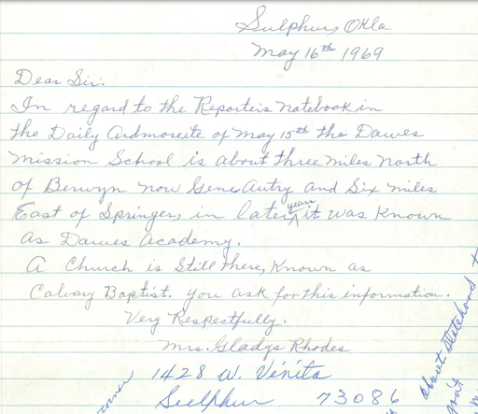 A sketch of the school was found in an old article from the Daily Oklahoman. The article described the history of the old Calvary Baptist Church, and included an image of the old church with attached school.
Over the years various articles about Dawes Academy have appeared in the press. One such article about education in the Territory included a statement written by Attorney B.C. Franklin.

In the same article from the Daily Oklahoman (cited below image of church) it is revealed that Miss Mary Elizabeth Allen, who married Hiram Dawes, and it was they who migrated to the Territory to work "among the Negroes in Muskogee."  After her husband's death she raised about $1000 and started a school in Berwyn. In 1893 she gave management of the school to the Baptist Home Missionary Society. It is said that the school was named in honor of her husband. 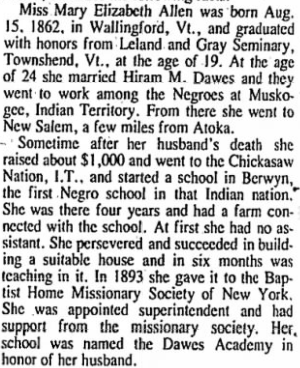 The Daily Oklahoman
Oklahoma City, Oklahoma
August 8, 1971
Although little else is known about Dawes Academy, hopefully it will not be forgotten as one of the pre-statehood schools for Freedmen of Indian Territory.