During the Dawes Enrollment era, for Choctaw Freedmen, the process began in the Stonewall/Ada community. Simon Clark appeared in front of the commission to enroll himself with his family. His name and that of his family were inscribed on the very first card of the Choctaw Nation.  This occurred in September of 1898.

However upon examination of his card, one can see that his name was actually removed, with the line drawn through his name. And in addition--the actual roll numbers of his wife and children were not 2 through 5 as would be expected on a low card. Their actual roll numbers were much higher than single digits that one might think.  So what happened in his case? 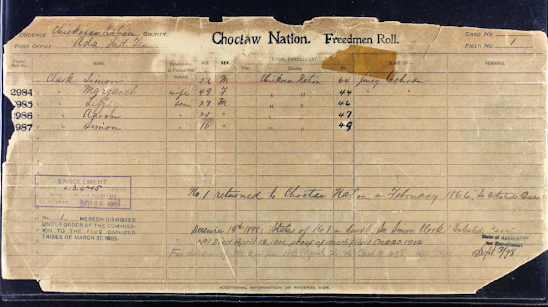 Simon Clark had been enslaved by Jincy Chochran. His parents were Jacob and Tena Clark. Interestingly, upon reviewing the application of Simon Clark it does appear that his enrollment was not a complicated one. 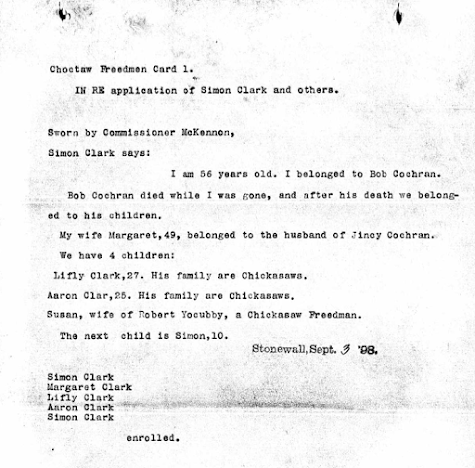 But the reality is that Simon's name was not placed on the final roll. He had been challenged about the time that he had returned to the Choctaw Nation after the Civil War. But when challenged her provided more information about it, and one can learn about his exact movement after the war. 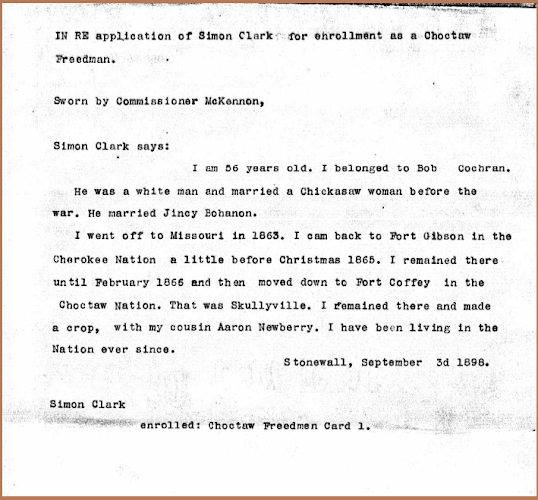 But when you look at the enrollment card more closely---it is clear that something did not satisfy the commission. Firs of all, he was on Card #1. And being the first person interviewed on that card, his number should have been also #1. Secondly the members of his family who were later enrolled, should have had their number as 2 through 5, respectively.  But instead their roll numbers are much higher. 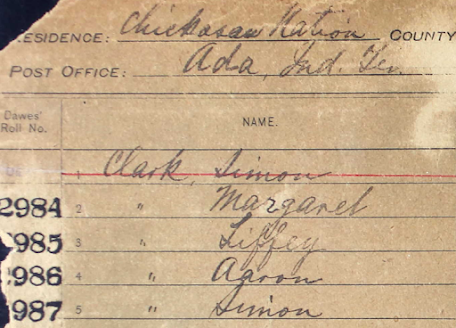 The notes at the bottom of the card reflect the issue around his movement after the war, and his return to the Choctaw Nation. But clearly, the reason why his name was not placed on the final rolls, is revealed. Apparently Simon Clark passed away in 1902 4  years before the rolls were closed.

But there is another side to Simon Clark's story.  The reason he left the Territory and returned to the Territory a year later, was that he fought for his own freedom. He left and joined the Union Army as a soldier in the US Colored Troops. 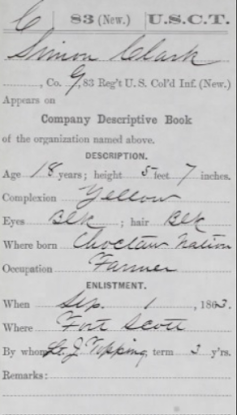 Later in life he applied for and received a pension for his service in the Union Army. 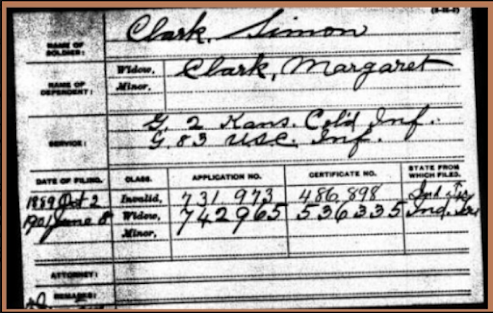 His being a former soldier and a Civil War pensioner would have provided him with a certain degree of honor and respect in his local community and and around Ada. Many in that area were not former soldiers, so he would have been well honored in the community of Freedmen where he resided.

However because he died before the process ended, his name was not placed on the final rolls, although it had been approved.

Several months later in the spring of 1899, there came Amelia Folsom. She lived in the town of Doaksville, and she was 52 years of age, and not far in age from Simon Clark. Her name is found on card # 163, and she was listed alone on the card. She was married to a Chickasaw Freedman named Henry Folsom, which is why only her name is on the card alone. 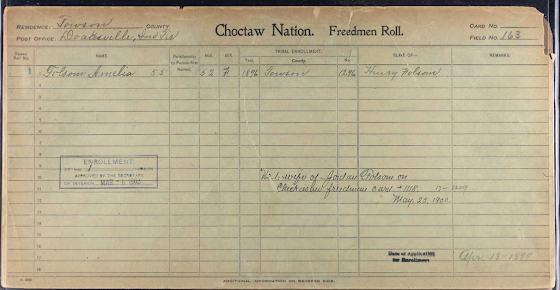 However, she, Amelia Folsom is given the roll number of #1. She was not "next in line" behind Simon Clark, and in fact appeared in front of the commission sever months after he did. As one looks at the enrollment cards that follow her card, the numbers on those cards are in numerical order, with cards # 2,3,4,5, etc. These interviews were occurring in April of 1899 in Towson County in the Doaksville area.
Amelia's voice is not found in her file. Her husband Jordan Folsom was interviewed, and it is his voice that we hear: 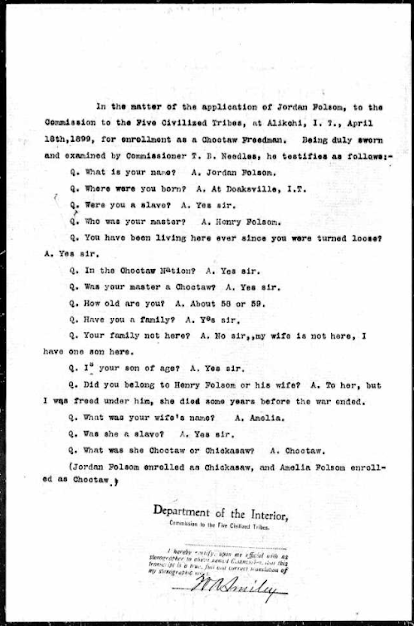 Like many of the interviews conducted in Chickasaw country, the interview was one of the many abbreviated ones, with short questions and answers. Amelia's name was approved without difficulty, but full details about her life are not known.  How she came to be Choctaw Freedperson #1 more than six months after the process began,  is not clear. She was roll #1, but clearly Simon Clark was one of the firs to appear a the "front of the line."

Interestingly, when Simon Clark appeared with the Dawes Commission in the fall of 1898, the cards that follow his card do not increase in numerical order. In fact they are not sequential in any way. The possibility exists that the commissioners did not assign number in exact numerical order, nor did they go through the blank cards in numerical order. The final roll number assigned, was clearly done in a different manner that does not appear to be clear.

However, nevertheless, Simon Clark's card number placed in clearly in the early process of the Dawes enrollment for Choctaw Freedmen. Amelia Folsom enrolled alone among those who lived in the Chickasaw community of Ada and she was thus assigned the number early on when the commissioners were in her area.

Chances are that the numbers followed the commissioners and it was they who assigned roll numbers within a specific range, no matter when they began interviewing in their designated areas.

Clearly, Simon Clark was at the front of the line, and Amelia was at the front where she lived in Doaksville. Both were good people living the lives that fate had delivered to them. As ordinary as their lives may have been they were clearly determined to involve themselves in a process that would carry forward their legacy into an uncertain future in a complex status of a complicated land.

They are both honored on this 3rd day of Freedmen History Month.