Every one of the schools that provided education for Freedmen of Indian Territory is gone. Except for one building that is now a museum, not even the foundation remains. Some have historical markers, and some are mere mentions in various books about Oklahoma history.

In an effort to honor those schools that took many Freedmen families from darkness into the light of literacy, they will be mentioned each day this week.

These schools provided what education there was, and for many became the foundation upon which many families were able to grow and prosper. They are honored here. 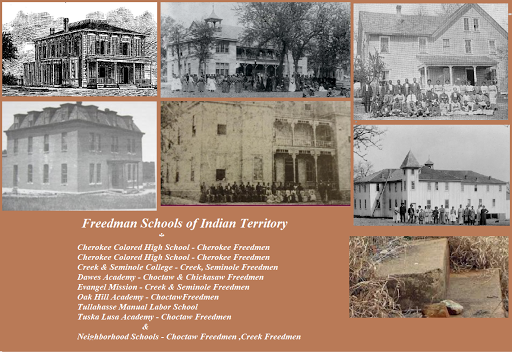 The school in Tullahassee bears the original name of the school--Tullahassee Mission. That reflects the school established for Freedmen The marker does mention that it was later operated as a school for Freedmen.

No other markers reflect the remaining schools for Freedmen. However, these institutions shall not be forgotten, and shall be remembered for foundation and impact that they had as the freed people from these nations moved into a new and challenging future.