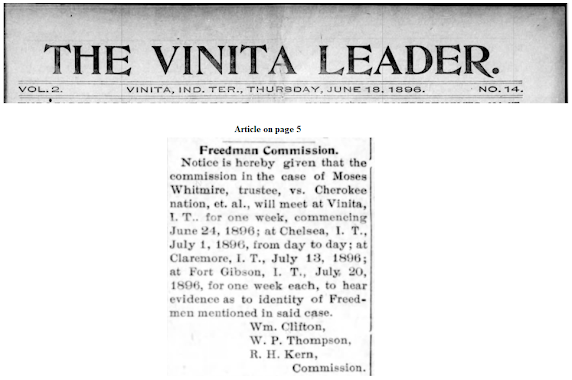 When studying articles from the 19th century Indian Territory, anyone with an interest in Freedman history will note that numreous articles in the press appeared about the former slaves and the many struggles that they encountered. Some articles were about struggles for citizenship and equal rights and others made interesting references to schools and institutions established by and for Freedmen.
And one interesting case arose pertaining to funds set aside for Freedmen emerged in the Five Tribes, and one of them was the case of Moses Whitmire trustee for the Freedmen of the Cherokee Nation.

The issue was that of $400,000 to be provided for freedmen, and from 4% to 10% to go to two attorneys from St. Louis---Robert H. Kern, and J. Milton Turner. Whitmire was an elderly man had been appointed as trustee for the freedmen, but soon charges were brought up against him about the funds and a mishandling of funds, and allegations that he had promised a larger amount of the money to the attorneys and allegations arose about mishandling of funds. Whitmire refuted this, and made his own statement. He pointed out that he was unable to read or write and that a document that he was said to have signed was not read or understood fully by him. An article from the St. Louis Globe Democrat carried his statement in a piece about the matter. 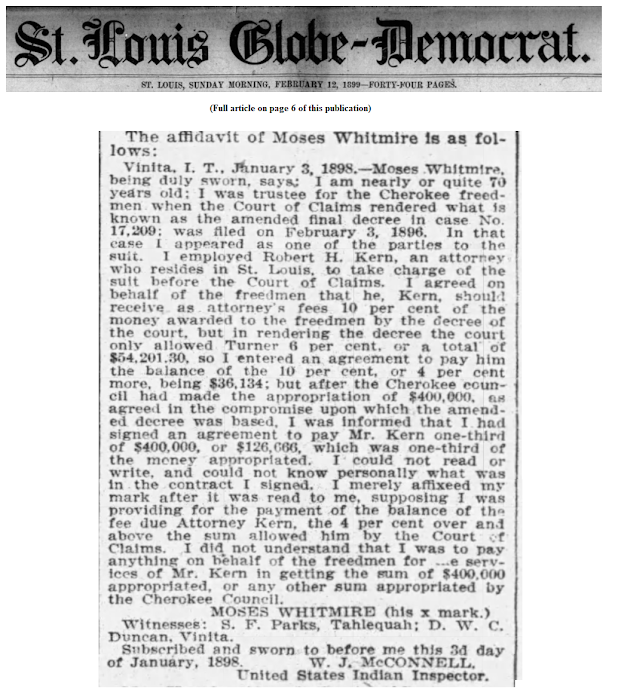 Ten years later the issue was still being discussed. by that time, Moses Whitmire had died but an interesting summary of the case appeared in a publication from Nowata, C.N.

Two years later the issue had reached the U.S. Supreme Court, and a brief article from the Chicago Tribune describes how the issue was handled. 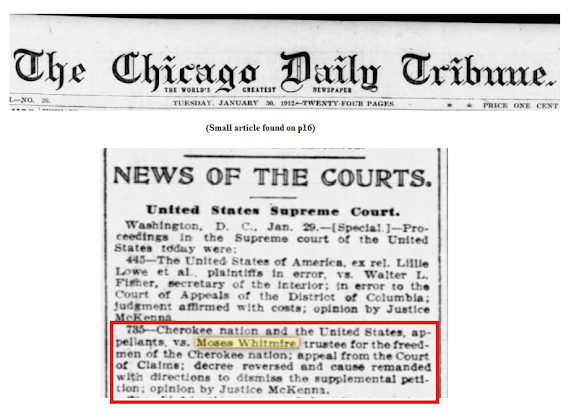 The Moses Whitmire case is a rare instance of a case from Indian Territory pertaining to Freedmen, appearing in the US Supreme Court. A few years earlier Equity 7071 involving Chickasaw Freedmen was to have been argued in front of the Supreme Court, but the attorney never filed the brief and thus, it was never heard. The Whitmire case appears to be one of the few cases that appeared, even if only briefly in the nation's highest court.
The plight of Freedmen from all of the tribes was one that was disputed and argued repeatedly in the post Civil War years,  and it appears that the case of Moses Whitmire was no exception. It is also clear that victories were few if ever won during those trying years before statehood.

And for Moses Whitmore the man, very little is known. In his younger years he was enslaved by Cherokee George Whitmire. By the time of the Dawes Commission, he was 70 years old, and he was most likely one who also came to the Territory during the Removal period. His mother's name was Peggy, also enslaved by Whitmire, and his father's name is not known. He resided in Hayden, in the Cooweescoowee District of the Cherokee Nation. As an elder his being selected as a trustee it is clear that with his being given such a position, he may have demonstrated other aspects of being a leader or man of influence among Freedmen.
Not much is known about the descendants of Moses Whitmire and after over a century is it not known if they are aware of their ancestor's quest and position as a trustee for Cherokee Freedmen. Hopefully more will be known about Mr. Whitmire, the man, and of his quest to represent his community.